Sebastian Vettel held on to the top time of anyone over all eight days of pre-season testing in Spain, despite Ferrari being forced to end their final day prematurely midway through the afternoon on Friday.

According to the team, the SF90 suffered an electrical issue shortly before the midway point that would take too long to track down and repair in time to get back out again.

Red Bull also hit problems in the afternoon, with ongoing gearbox issues preventing Max Verstappen from getting out at all or adding a single lap to his morning tally.

It fell to Mercedes' Lewis Hamilton to be the fastest runner in the afternoon with a time of 1:16.224s, only marginally slower than Vettel and over three tenths faster than his own team mate Valtteri Bottas's morning best.

Earlier in the day, Vettel had set the fastest time of the test with a scintillating 1:16.221s, a mere one hundredth better than the previous test benchmark recorded by his young Ferrari team mate Charles Leclerc on Thursday.

While Vettel stayed in the cockpit for the final session at the Circuit de Barcelona-Catalunya, Bottas made way in the W10 after lunch for Hamilton. The only other driver changes over lunch were at Renault, where Nico Hulkenberg took over the wheel of the R.S.19 from Daniel Ricciardo; and at Haas, with Kevin Magnussen getting his turn in the VF19 after Romain Grosjean's morning stint.

It was a quiet start to the proceedings, with a full thumb-twiddling six minutes elapsing before Sergio Perez and Robert Kubica finally headed out on track for Racing Point and Williams respectively. Thereafter the rest of the field gradually joined them in taking to the track.

No one was looking to set any flying laps straight out of the gate. As has been the standard format this week, long-distance runs took precedence with drivers focussing on racking up the miles and increasing the lap count in the time remaining. It as during this spell that Perez made his century for the day, his best daily total of the test and a promising development for the team after hitherto somewhat disappointing mileage for Racing Point thus far.

Hamilton's initial effort of the day clocked in at a modest 1:18.695s, from which he gradually nibbled away over a full second during the course of his early stints. Eventually a move to the faster C4 compound saw him shoot up to second on the timing screens with just under 60 minutes remaining, a mere three thousandths of a second off Vettel's morning pace. 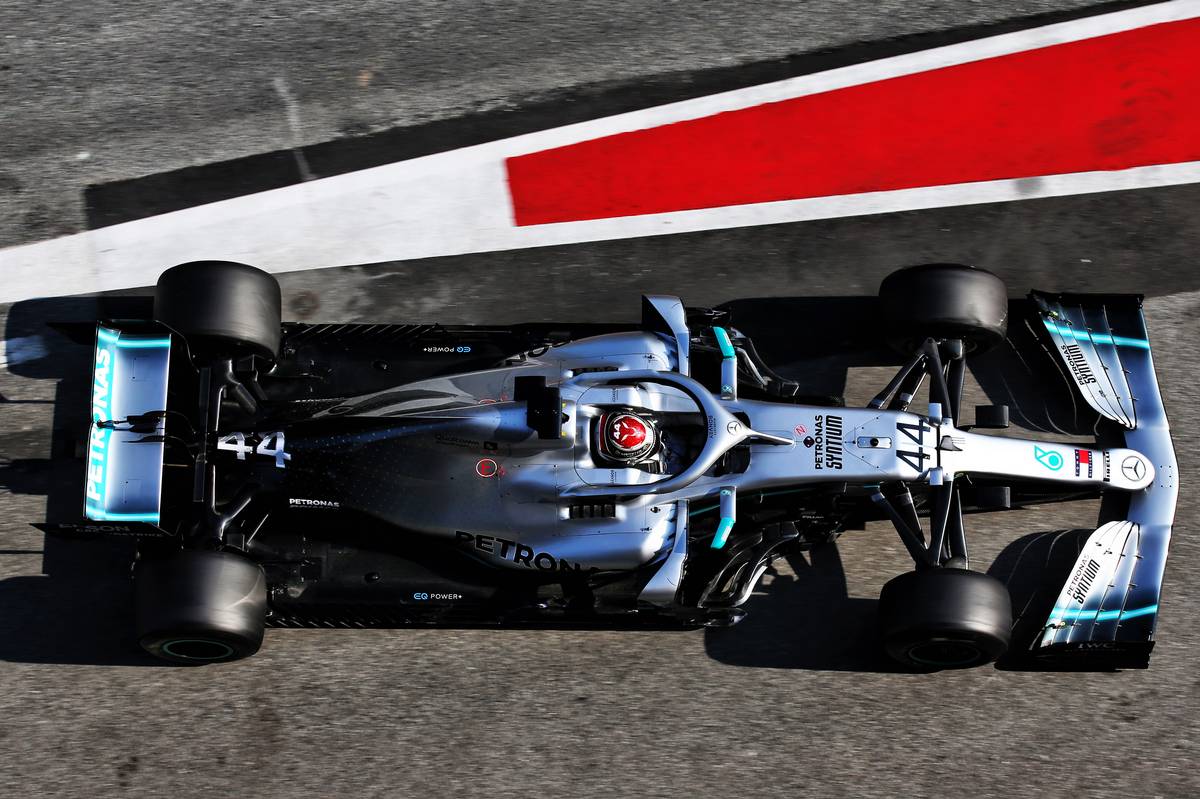 The news was not so good at Red Bull. The team found itself frustrated by a gearbox issue that kept Max Verstappen firmly sequestered in the garage, having already missed time at the end of the morning run. Together with Pierre Gasly's accident on Thursday, it made for a disappointing end to Red Bull's test which had otherwise shown promising pace and reliability in their new partnership with Honda.

Ferrari also wrapped early, citing an electrical issue in Vettel's car which caused him to stop on track at the exit of turn 2 after 90 minutes and triggering a red flag for recovery. It meant the German driver had added only 42 laps to his tally after the lunch break. The team subsequently confirmed that the problem would "take too much time to repair, so this is it for today".

Among those who were still successfully running, there was a late flier from Hulkenberg to put the Renault up to fourth place with a time of 1:16.843s on the C5 compound putting him ahead of Toro Rosso's Daniil Kvyat and McLaren's Carlos Sainz. The Spanish driver had put in the day's top lap count of 134, just two more than Alfa Romeo's Kimi Raikkonen and three greater than Kvyat.

With the clock running out on testing, many drivers opted for a spell of pit stop practice as the sun dropped low in the sky. However this was interrupted by a final red flag of the day as Magnussen came to a stop in the Haas in turn 4 with 15 minutes remaining, having already notched up a hardcore 94 laps since lunch to add to Grosjean's morning 73 tours.

Despite only two minutes remaining of the session, Hamilton, Hulkenberg and Kvyat nonetheless dutifully headed out when the track went green again, showing that every second really does count when it comes to preparing for a brand new season of F1.

Ferrari is not out in front, insists Binotto

Taffin believes Renault has hit its targets with 2019 engine