Bird had been trying to find a way past Andre Lotterer's Techeetah for most of the race, and in the closing minutes the two cars made contact as they jousted for position.

Lotterer subsequently suffered a right-rear blow-out and suspension damage which allowed Bird to go on and claim his ninth career win in the series, and take what appeared to be a hefty lead in this year's championship standings.

But the clash with Lotterer was immediately placed under review by race stewards following the finish, leading to unusually subdued celebrations for Bird and his team on the podium.

The officials took over four hours to officially confirm their decision, which saw Bird handed a five second penalty for causing an avoidable collision, dropping him down from first place all the way to sixth.

“The driver of car two had a direct hit with the right-rear tyre of car 36 resulting in an immediate puncture,” the stewards notice explained.

“It is acknowledged that the track was damp in certain areas, however car 36 left more than a car width to the inside. As a result, we find that the driver of car two was predominantly to blame for the incident.”

As a result of the penalty, Venturi's Edoardo Mortara has been promoted to the top spot, making it the Swiss driver's first Formula E victory. 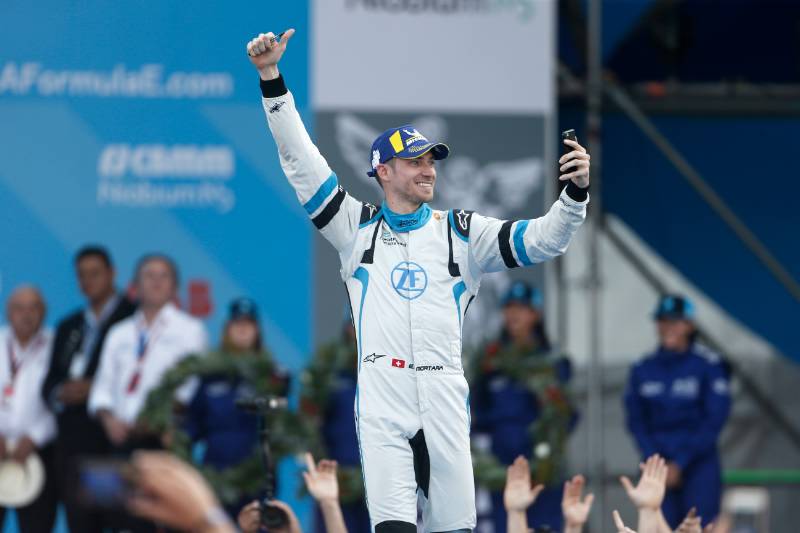 Audi's Lucas di Grassi now takes second place, with Bird's team mate Robin Frijns moving up to third place ahead of Daniel Abt in the other Audi.

Mortara's team mate Felipe Massa is also a beneficiary, gaining a spot to finish in fifth one place ahead of the relegated Bird.

Lotterer's stricken car crawled home as the last of the 14 finishers. Despite being vindicated by the stewards' verdict, he was understandably far from pleased with what had happened.

“It was supposed to be a really good day,” he said. “But I was unfortunately hit in the back by Sam Bird and that destroyed my tyre and suspension and that was it. .

"It wasn’t really a fair move, and we go home empty-handed, " he added. "It is what you would call a disgusting move because it is not really the way we should race.

"Even if he is under investigation, I can’t get the win back so it’s pretty pointless. The good thing is that the car is quick, so we can look forward to Sanya to try and do this again.”

Despite the penalty, Bird retains the lead in the drivers championship although his margin over Jerome d'Ambrosio falls from 18 points to just three. Mortara's inherited win puts the 32-year-old up to third in the standings, just one point further back.

Raikkonen still in the dark about Alfa Romeo prospects