They obviously don't call it the Temple of Speed for nothing as Monza's parklands have always been home to peak momentum and velocity.

Yet the Scuderia found its perfect top speed match at Monza.

The Mercedes-powered Racing Point of Sergio Perez clocked in at the speed trap at exactly the same speed as Charles Leclerc's Ferrari. 349.7 km/h.

Perez's teammate Lance Stroll wasn't far behind while McLaren Carlos Sainz was the fastest Renault-powered car in a straight line.

The relatively low positions in the readings of Lewis Hamilton and Valtteri Bottas are obviously an indication of the superior drag of their W10 Silver Arrow, which however makes up in Monza's sweeping corners the rush it lack on the straights. 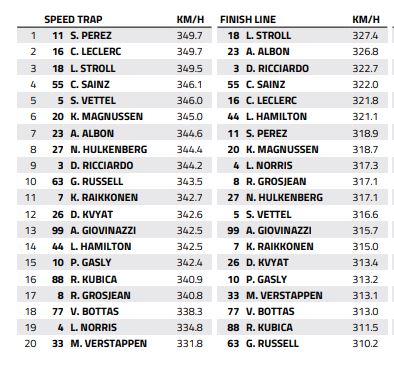 Gasly: Peroni crash 'clearly a good reason' to have the halo