Charles Leclerc took his second successive F1 win with victory in the 2019 Italian Grand Prix on Sunday, to the delight of the Ferrari fans at the Autodromo Nazionale Monza.

In an impressive display of calm driving under huge pressure, Leclerc finished narrowly ahead of Mercedes' Valtteri Bottas who had been able to pass his team mate Lewis Hamilton for second place in the closing laps.

However it was a nightmare race for Sebastian Vettel who spun at Ascari and was penalised for returning to the track in an unsafe manner which resulted in him clipping Racing Point's Lance Stroll.

Max Verstappen also hit trouble early on, but the Red Bull still managed to recovered from a back of the grid start to finish in the top ten. 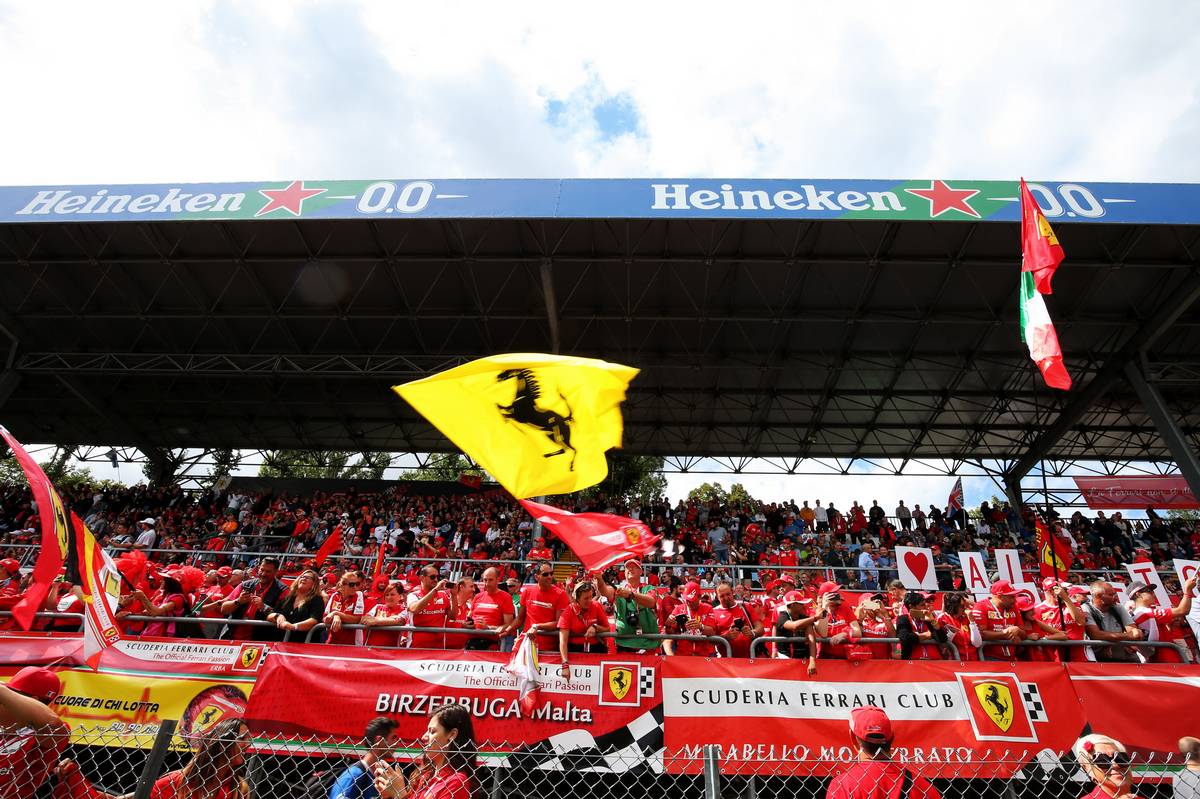 Despite heavy rain overnight, Monza was back to its sunny best in time for the start of Sunday afternoon's race. The passionate Tifosi were understandably delighted by the sight of Ferrari's Charles Leclerc lining up on pole ahead of Mercedes duo Lewis Hamilton and Valtteri Bottas, with Sebastian Vettel right behind ready to pick up the pieces of any first lap mayhem.

When the lights went out, Leclerc had a slow start which encouraged Hamilton to try a move down the inside line, only to get pinched into turn 1 which saw him briefly overtaken by Bottas. The three emerged from the first chicane in the same order in which they started, while Vettel lost out to Renault's Nico Hulkenberg but was eventually able to rectify that situation at the start of lap 2.

There was more action at the back, with Max Verstappen damaging his front wing in a clash with Sergio Perez after the pair started at the back of the grid due to engine changes. While Verstappen was forced to pit for repairs, his Red Bull team mate Alexander Albon was also in the thick of it in a lively back-and-forth exchange with Carlos Sainz over eighth place, Albon successfully outbraking the McLaren into the second chicane on lap 4, only to then run deep and get pushed wide into the gravel through Lesmo which saw him drop out of the top ten. 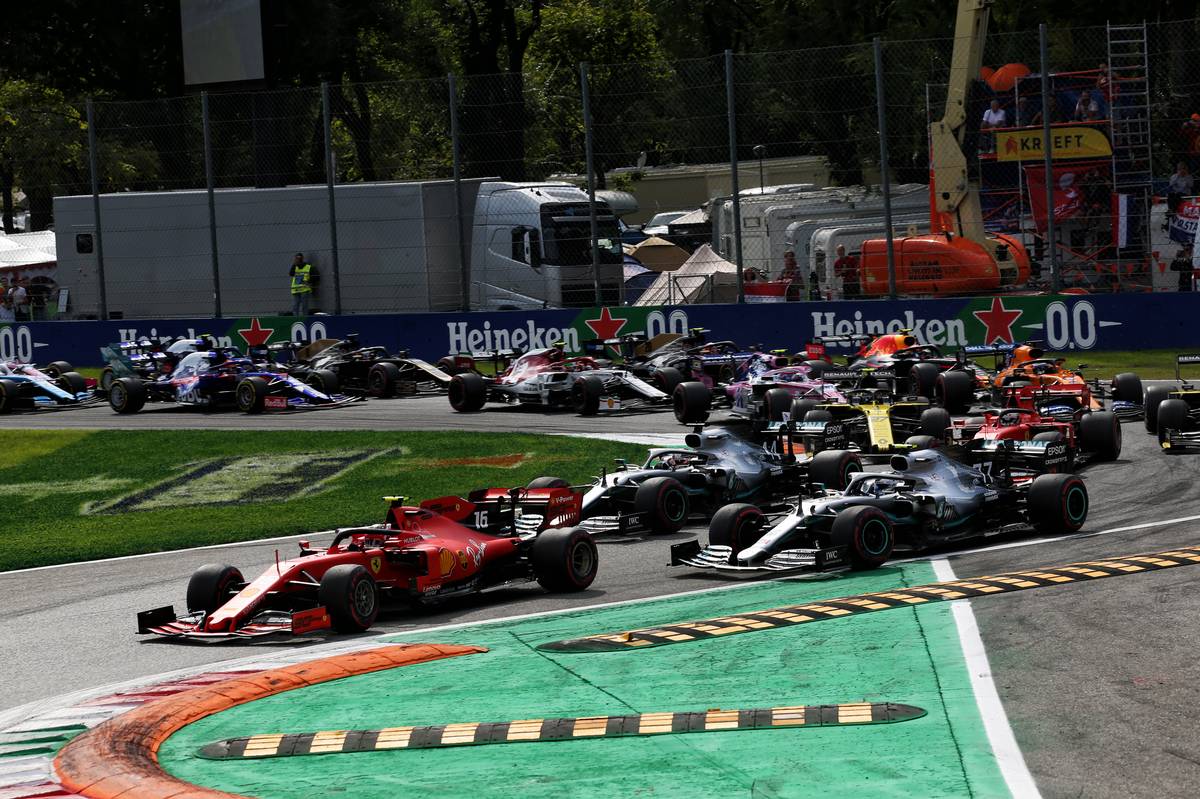 While Leclerc had pulled out over a second from Hamilton at the front, there were cries of dismay from the Italian fans when Vettel spun out of fourth place at Ascari. Worse still, his desperation to get back underway saw him pull back on track right in front of Lance Stroll. Contact left the Ferrari with a damaged front wing and sent the Racing Point spinning; Stroll's attempt to recover saw him come dangerously close to Toro Rosso's Pierre Gasly in turn.

Moments later, Romain Grosjean also spun at Ascari suggesting that gravel on the track was making things tricky for everyone; forced pit stops for Vettel and Grosjean saw both men drop to the back in 19th and 20th behind Robert Kubica's Williams. Vettel's plight was then made even worse by the race stewards handing him a ten second stop-go penalty for rejoining the track unsafely, effectively ending his chances of featuring in the day's action. Stroll was also penalised for his near-miss with Gasly with a straightforward drive-thru.

Things were also not going all that smoothly for Max Verstappen, who was suffering from the same power drop-out that made him a no-show in Saturday's qualifying session. However the RB15 was able to gather itself back together, and on lap 16 he was able to use DRS into turn 1 to pass Kimi Raikkonen for 15th place, the Alfa Romeo having been required to start from pit lane following repairs following the Finn's Q3 accident. Raikkonen soon found himself dropping further back with a penalty for starting the race on the wrong tyres, while Albon was also handed a five second penalty for gaining an advantage by going off track while battling with Haas' Kevin Magnussen. 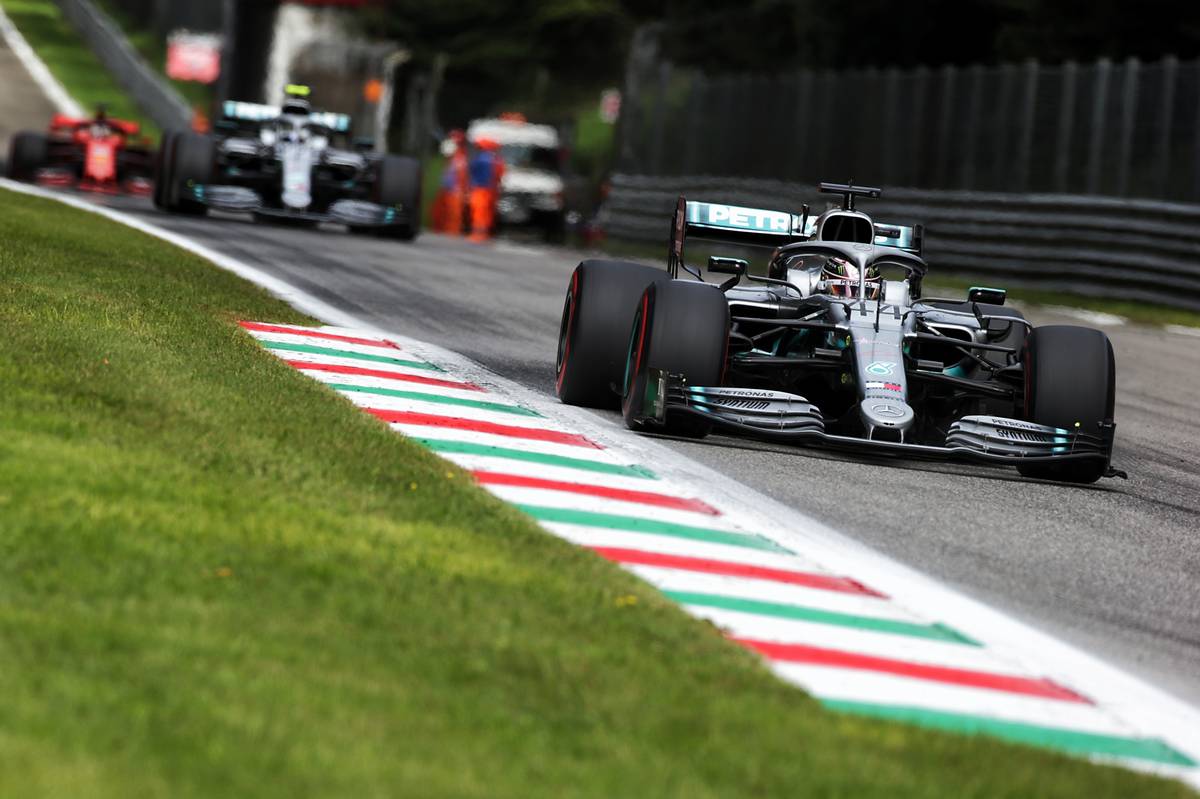 Lap 20 heralded the start of scheduled pit stops, Hamilton coming in to discard his sort tyres for a brand new set of mediums in the hopes of making it to the finish. Leclerc came in next time by in an effort to defend against the undercut but Ferrari opted for the hard compound which made it extremely hard work for the Monegasque to hold on to track position, especially when Hulkenberg got caught up in the middle of the duel. Hamilton's best chance came when the pair went into the second chicane, However, Leclerc left him no space and Hamilton was forced to take to the escape road, relieving the pressure from Leclerc who went on to set a new fastest lap of the race despite being on the harder compound.

"He didn't leave me a car's width there - he put me on the grass," complained Hamilton. The race stewards agreed, but only to a point - settling for showing Leclerc the black-and-white driver standards flag, essentially a yellow card meaning that no further action would be taken against the Ferrari driver over the incident.

Mercedes had kept Valtteri Bottas out on track, and the Finn was in the lead at the halfway point as Leclerc and Hamilton ran in second third ahead of Daniel Ricciardo, Nico Hulkenberg, Carlos Sainz, Alexander Albon, Daniil Kvyat, Sergio Perez and Pierre Gasly. Bottas finally pitted on lap 27, with Sainz also making his stop at the same time only to have to stop at pit exit when the right front tyre was improperly attached on the McLaren. It triggered a brief Virtual Safety Car as the marshalls retrieved the three-wheeled MCL34. 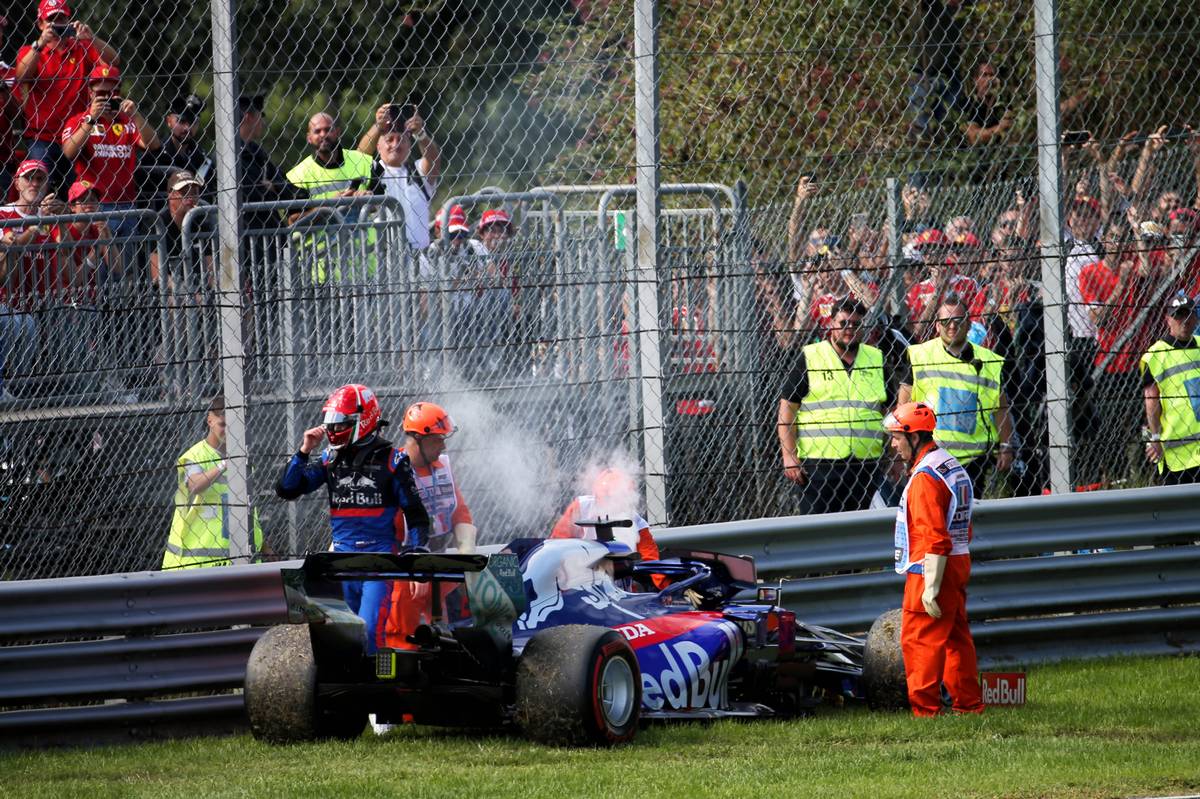 Leclerc was now returned to the lead and under renewed pressure from Hamilton, while Bottas was immediately back up to third place with a quick pass for position on Ricciardo. Moments later a second VSC was called as Kvyat parked his smoking Toro Rosso at the first chicane, giving Ricciardo the opportunity to make his own pit stop and maintain fourth place ahead of Hulkenberg, Antonio Giovinazzi, Albon, Perez, Magnussen and Lando Norris in the remaining McLaren who was up into the final points-paying position.

A turn 1 lock-up from Magnussen sent the Dane tumbling out of the top ten, promoting Norris to ninth but under attack from Verstappen. Leclerc also had a clumsy overrun at the chicane, allowing Hamilton to pounce - but it was still not enough to pull off the move through the Curva Grande before the door closed at the second chicane. While the pair continued to squabble over the lead, Bottas on his fresher medium tyres was pulling ever closer to them both and the Finn was duly able to take advantage of Hamilton taking to the turn 1 escape road on lap 42 dispelling any suggestion that Mercedes might use team orders to unleash Bottas to hunt down Leclerc for the remainder of the race.

In the end, Leclerc was just able to hold on to the lead despite the odd slip to cross the line narrowly ahead of Bottas, who made a significant mistake of his own on lap 51 which effectively cost him his final chance of attacking. Hamilton took the opportunity to make a 'free' pit stop for fresh soft tyres which enabled him to pick up the bonus point for fastest lap, minimising the slight damage that finishing in third place had done to his championship campaign. 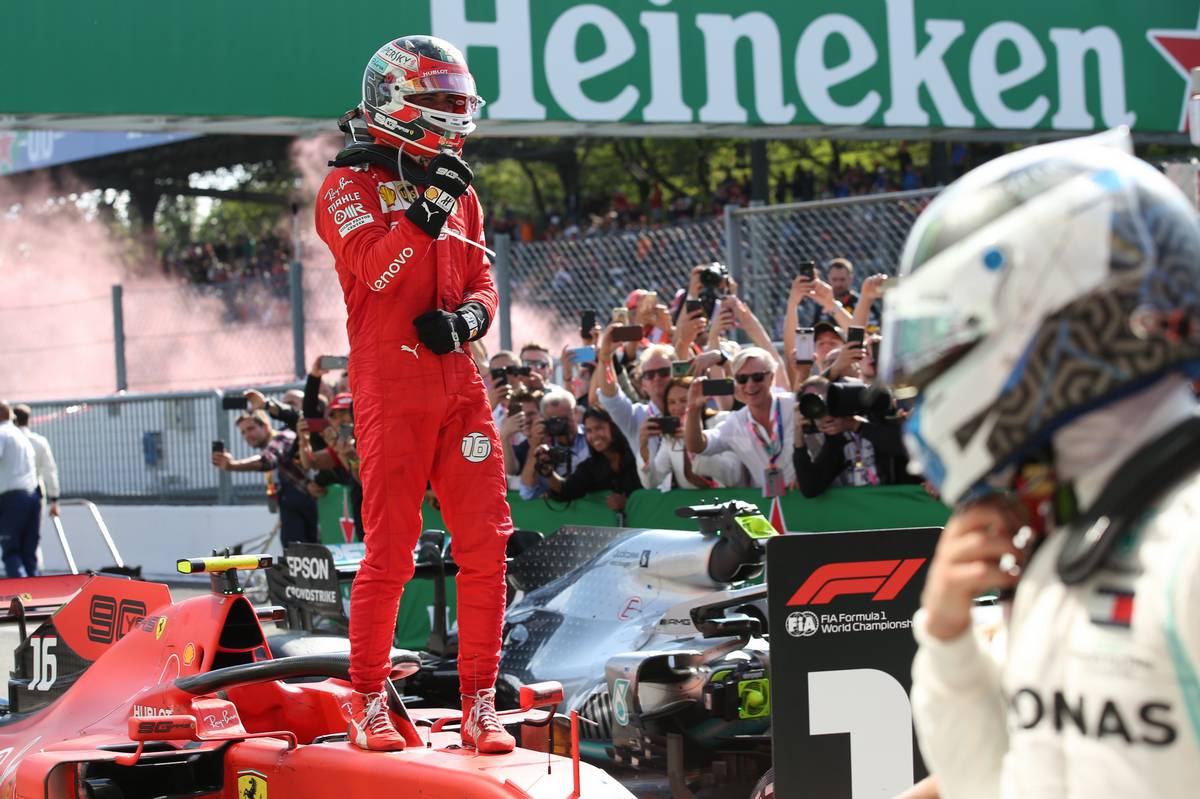 Ricciardo and Hulkenberg held on to fourth and fifth positions confirming Renault's surprisingly strong form at the Temple of Speed. Albon recovered from his earlier penalty to cross the line in sixth ahead of Perez, Verstappen, Giovinazzi and Norris.

Missing out on points were Gasly, Stroll, Vettel - and George Russell, who finished an amazing 14th place at a circuit that the Williams was expected to flounder on. He was ahead of Raikkonen, Grosjean and Kubica at the line, with Magnussen already having joined Kvyat and Sainz in retirement ten laps previously.