Formula 1's exclusive tyre supplier Pirelli has revealed details of drivers' tyre allocations for next week's United States Grand Prix at the Circuit of the Americas.

Pirelli is offering a selection of tyres from the C2, C3 and C4 compound categories - the same as they did for this weekend's Mexican Grand Prix at the Autódromo Hermanos Rodríguez.

Among the front runners, the most popular choice is for eight sets of the softest compound, the red-marked C4. In contrast, Mercedes and Ferrari requested only seven sets for Mexico while Red Bull went for nine.

Lewis Hamilton, Valtteri Bottas, Sebastian Vettel, Max Verstappen and Alexander Albon all make that selection for COTA. Hamilton and Vettel then top up their full allocation with two sets of the hard C2 and three of the medium C3, a decision shared by McLaren drivers Carlos Sainz and Lando Norris.

The other front runners opt for four mediums and take just the one default set of the hard tyre for the weekend. It makes Bottas, Verstappen and Albon the only drivers in the field to have four sets of the yellow-walled compound at their disposal in Austin.

The sole exception among the front runners is Ferrari's Charles Leclerc, who has requested nine sets of the soft tyre leaving him with just three sets of the medium and one of the hard. 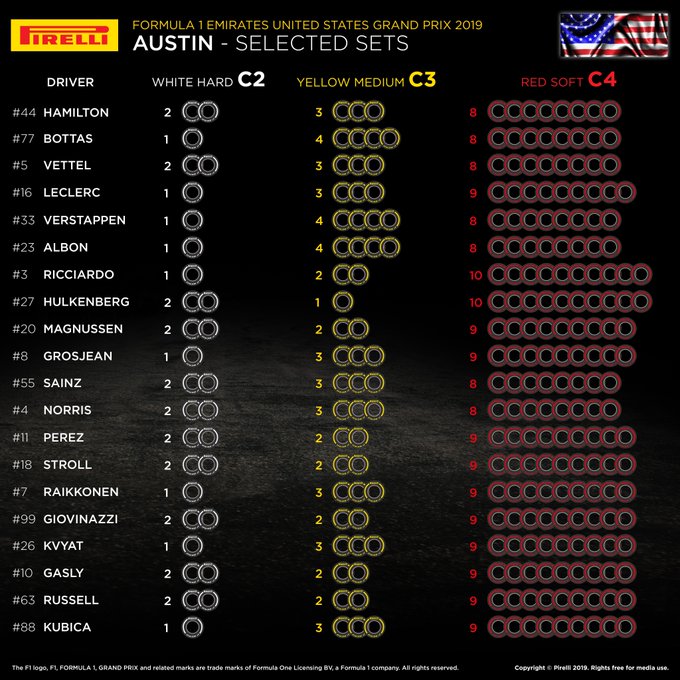 Renault break the mould by being the only team on the grid to request 10 sets of the soft compound tyres for the weekend for Daniel Ricciardo and Nico Hulkenberg.

Mexico 'new experience' for both Kubica and Russell