Valtteri Bottas finally found the edge that he needed to snatch pole position away from his Mercedes team mate Lewis Hamilton for this weekend's 70th Anniversary Grand Prix at Silverstone.

Bottas led all three rounds of qualifying but still had to dig deep to produce a final lap of 1:25.154s to prevent Hamilton from claiming the top spot in Q3.

However it was Racing Point's Nico Hulkenberg who stole the show, the stand-in driver achieving a mighty third place on the starting grid ahead of Red Bull's Max Verstappen.

Ferrari's Sebastian Vettel continued to struggle for pace, failing to make it through to the final round meaning he will start tomorrow's race from 12th on the grid. 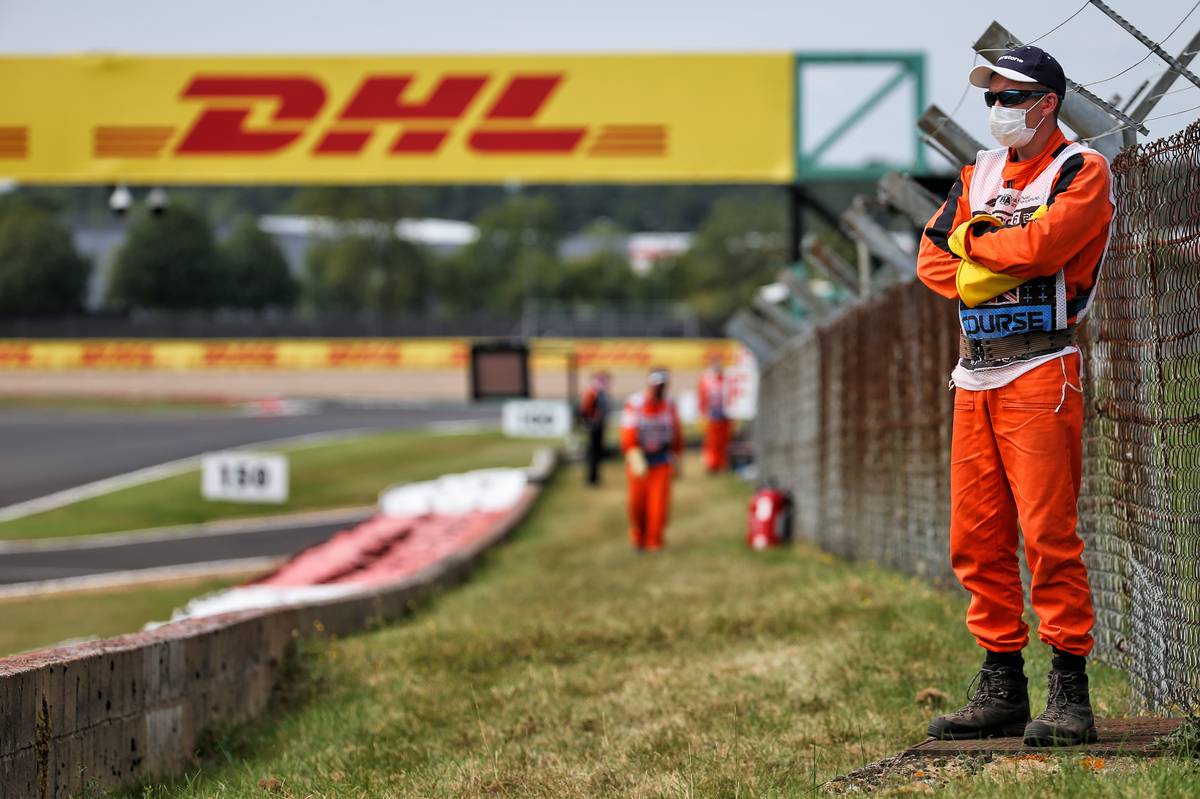 Q1: Bottas and Hamilton fastest ahead of both Red Bulls, Kvyat misses out

It was dry, sunny and rather humid at Silverstone as the drivers prepared for their second qualifying session at the circuit in just seven days, but the wind was picking up in time to add an extra frisson of difficulty.

First in action when the lights went green were Haas pair Kevin Magnussen and Romain Grosjean, together with George Russell for Williams and Racing Point stand-in Nico Hulkenberg. It was the German who came out on top in this early skirmish with a time of 1:27.279s putting him over a second ahead of Russell, but he was the only one of the four to make a start on the soft compound rather than the mediums.

Hulkenberg's time saw off first efforts from Charles Leclerc, Sebastian Vettel and Lando Norris who were all on softs, but he was eventually deposed by Lewis Hamilton going four hundredths quicker. However his Mercedes team mate Valtteri Bottas then went even faster, before both were ousted by Max Verstappen posting a time of 1:27.154s. The second Red Bull wasn't so swift, with Alexander Albon drifting off at Chapel and kicking up a lot of dirt on his initial effort.

The two Silver Arrows then picked up the pace, Hamilton going top at 1:26.818s and Bottas just 0.181s in arrears. At the end of the first runs, Russell was on the bubble of the drop zone after being held up by Esteban Ocon in an incident that will be reviewed by the stewards after the session. On the other side of the cut was Albon, meaning he was currently sharing the drop with Magnussen, Kimi Raikkonen, Antonio Giovinazzi and Nicholas Latifi.

Quick to get back out for his second run, Russell vaulted up to eighth place with his final effort, although a further flurry of improved times forced the Williams all the way back to 15th by the time the chequered flag came out. Albon similarly leapt up the timesheets, slotting into third place behind the two Mercedes where Bottas had improved his time to go eight hundredths ahead of Hamilton.

AlphaTauri's Pierre Gasly punched in an impressive final lap to end the group in fifth ahead of Lance Stroll and Lando Norris, with Ocon making a last gasp gain to move up to eighth ahead of Hulkenberg, Leclerc and Daniel Ricciardo.

Less fortunate was Daniil Kvyat, who looked to have done enough to make it into Q2 only to have his lap time deleted for exceeding track limits. As a result he ended up in 16th place and relegated to the sidelines for the rest of the session alongside Magnussen, Latifi, Giovinazzi and Raikkonen. 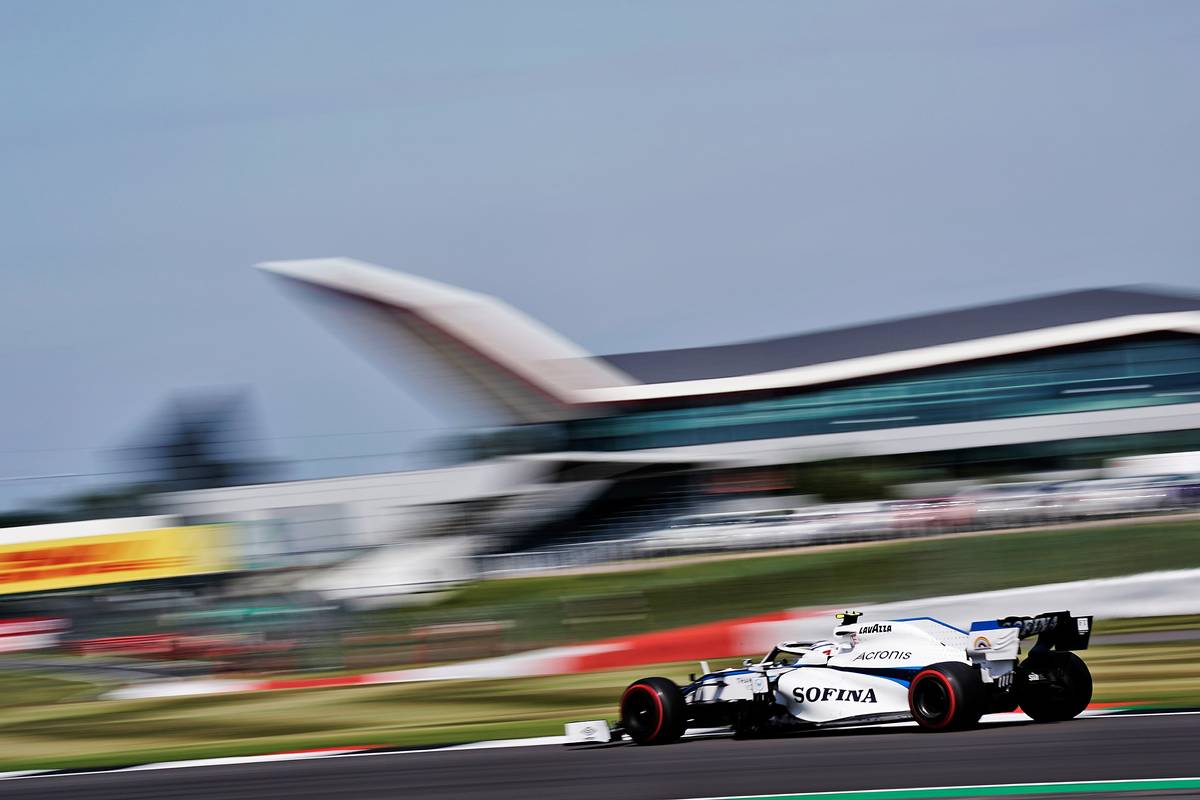 Light cloud was starting to fill in the skies over Silverstone, making the sunshine turn somewhat hazy and shaving a couple of degrees off the track temperature as Grosjean and Ocon headed out to begin the second round, followed by the two Mercedes runners. Everyone was on mediums, but Red Bull were rolling the dice by sending Verstappen out on hard tyres with the hope of making that their starting compound for Sunday's race.

Hamilton's opening offer this time round was 1:26.266s, but Bottas was almost half a second quicker when he reported in. In contrast, Verstappen was almost a full second off Bottas' time putting him fourth behind Ricciardo albeit still two tenths quicker than Albon was having started on the more traditional yellow-walled tyres.

Stroll was tucked in between the two Red Bulls in fifth place, but his super-sub team mate Hulkenberg ran wide over the grass at Chapel leaving him 11th place and at high risk of elimination. Once the two Ferraris had posted times, Hulkenberg was down in 13th which is where he had qualified last week. Others in danger were Vettel, Grosjean and Carlos Sainz, with Russell yet to come out to play after deciding to make just the one run toward the end of the round. 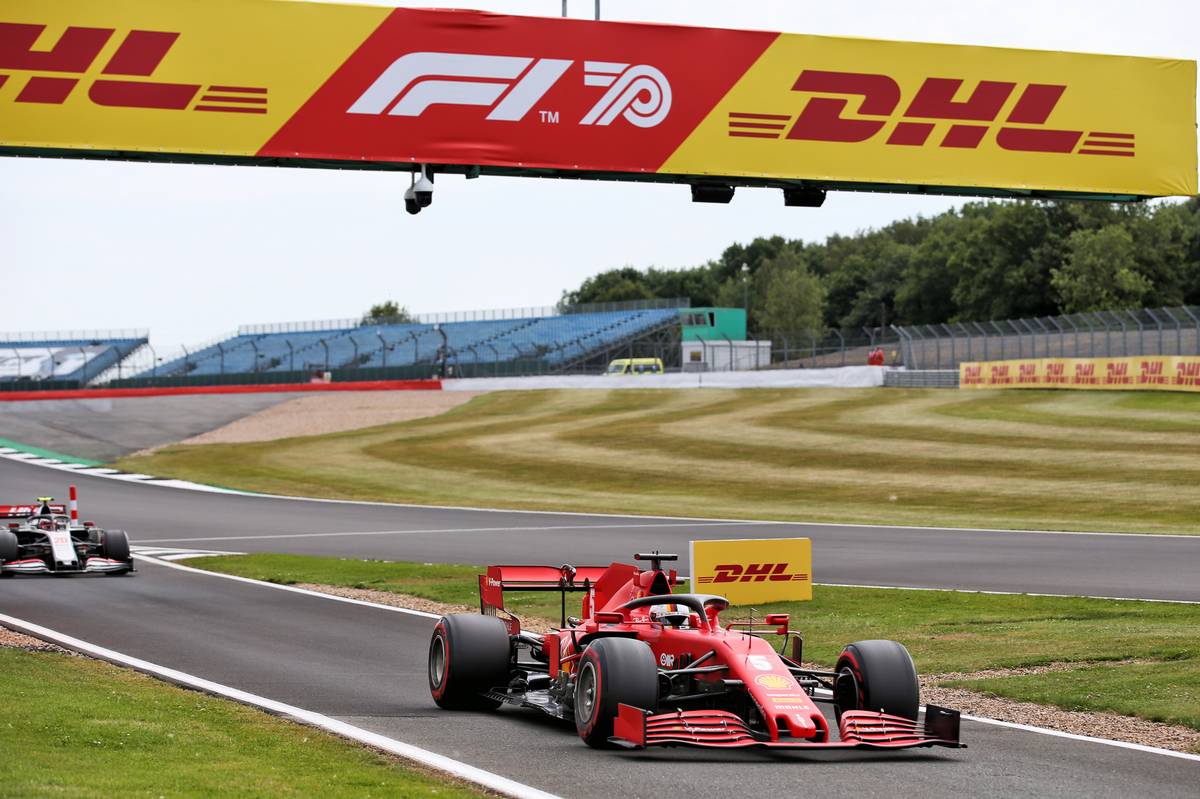 When it came, the Briton's lap was only good enough for 12th place, but it was nonetheless just two thousandths slower that Vettel who was forced to go back out on soft tyres in a bid to make it through to the final pole shoot-out round. Bottas and Hamilton were also out on softs as a precaution, but with little intention of setting an improved time on that compound unless their hand was forced.

As the clock ran out on Q2, Hulkenberg and Gasly pulled off big improvements to leap to safety with the Racing Point actually splitting the two Mercedes at the top of the timesheets, and Gasly slipping into fourth ahead of Ricciardo. Albon also dug deep to pick up sixth ahead of Stroll and Leclerc, while Verstappen made it through on the hard tyres after all.

It left Lando Norris on the cliff edge, and Vettel put everything into his effort to push the McLaren out of the top ten. However he fell short and was only good enough for 12th behind Ocon. Sainz, Grosjean and Russell were also eliminated at the end of the round. 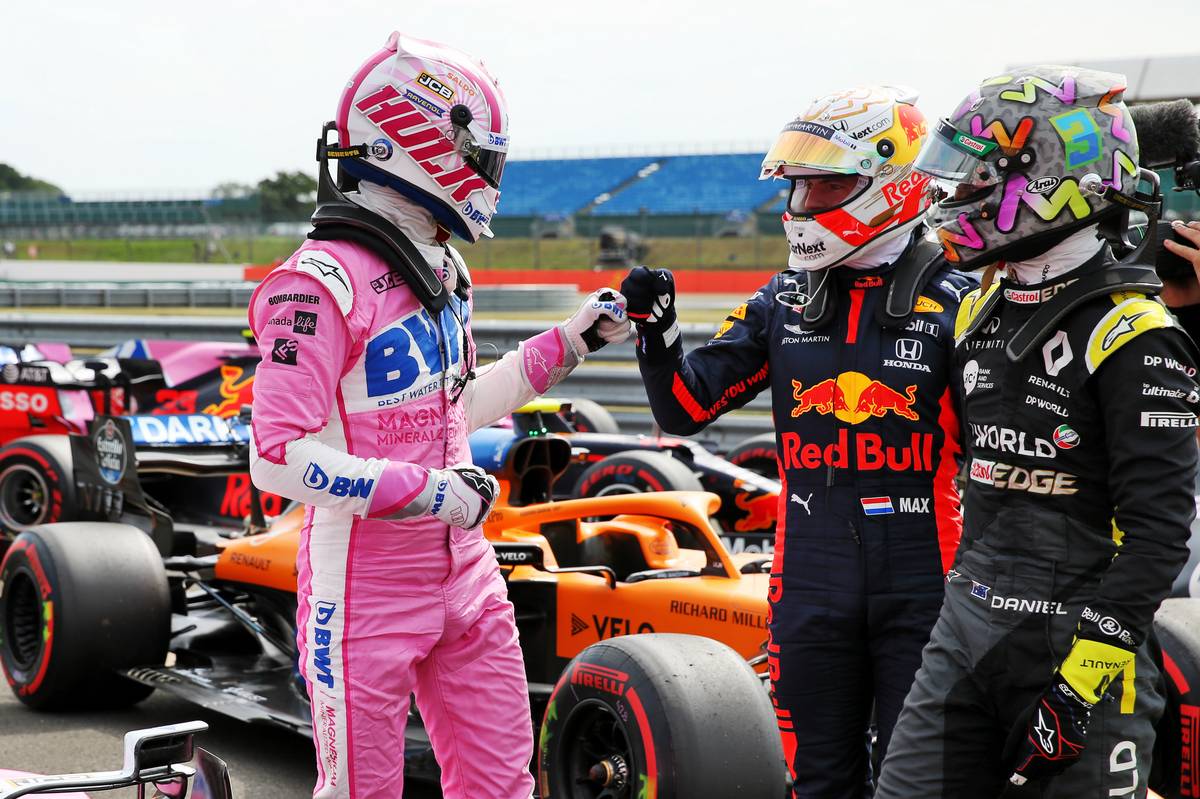 Norris was first to head out for the final round. The McLaren was straight on to the soft tyres as were the majority of the other cars with the exception of Ricciardo, Verstappen and Albon.

Hamilton took first blood with a time of 1:25.284s putting him a tenth ahead of Bottas, followed by Ricciardo and Hulkenberg. Red Bull were next up but both were over a second off provisional pole, with Leclerc even further back in seventh ahead of Stroll, Gasly and Norris.

In the unusually hot conditions, the soft tyres realistically only had one qualifying lap in them, and so everyone was immediately back to pit lane for a quick debrief and a new set of tyres before the climax of the session. When they came back out, Hamilton and Bottas had flipped to the medium tyres which remained the choice for Ricciardo, while Verstappen and Albon had flopped to the softs which was also the choice of the other remaining runners.

Despite swapping to the nominally slower compound, both Mercedes found more time on their final runs - but it was Bottas who did best with a time of 1:25.154s putting him 0.063s ahead of Hamilton and on pole position for tomorrow's race.

However the star of today's session had to be Hulkenberg, who put Racing Point onto the second row of the grid ahead of Max Verstappen. Ricciardo proved that Renault had also found some extra pace this weekend with fifth place alongside Lance Stroll, followed by Gasly, Leclerc and ALbon. Slowest of the ten cars in Q3 was Norris. 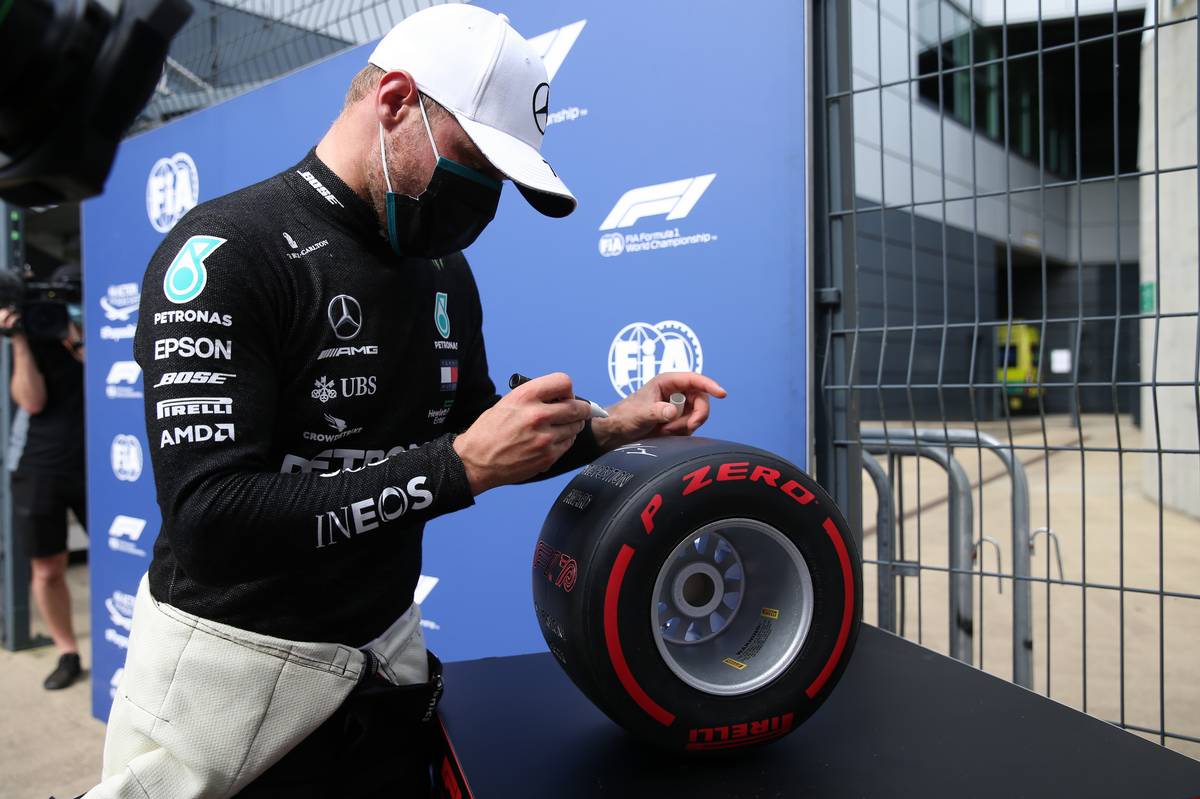 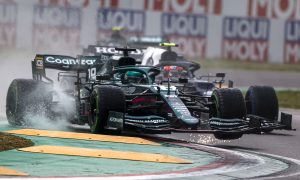