Red Bull's Max Verstappen took victory in the 70th Anniversary Grand Prix on Sunday, after softer tyre compounds and hot conditions at Silverstone proved to be an insurmountable Achilles heel for Mercedes.

Lewis Hamilton made a successful late run to pick up second place from Valtteri Bottas, leaving Charles Leclerc just missing out on the podium in fourth place on a one-stop strategy.

His Ferrari team mate Sebastian Vettel had another afternoon to forget with a solo spin on the first lap leaving him with too much ground to recover to make it into the top ten by the chequered flag. 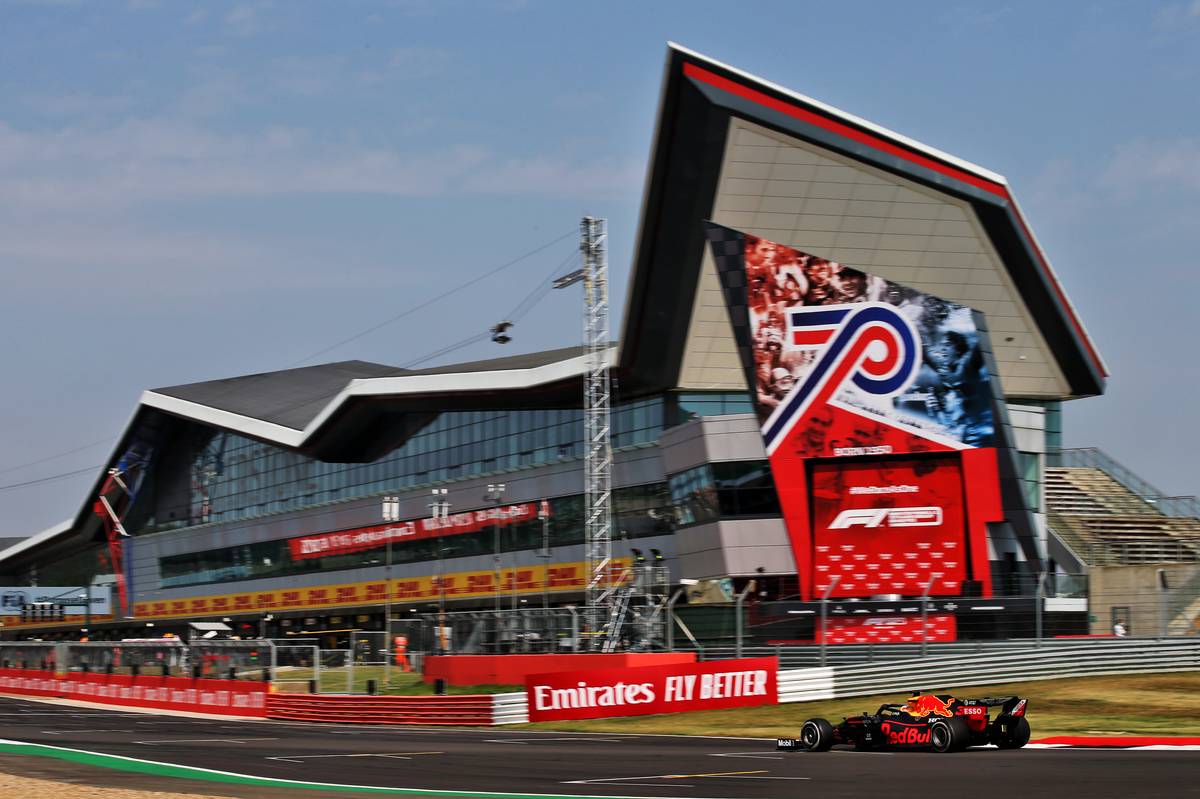 As the cars headed to the grid to start the second race at Silverstone in a week, the overcast conditions that had prevailed during the morning which had helped to keep temperatures lower than forecast had started to burn off, leaving sunshine and blue skies starting to superheat the track in time for the start. Given the tyre issues seen in the British Grand Prix, everyone was feeling nervous about a similar situation developing once again.

Just as it had been last time, the front-row was an all-Mercedes affair although this time Valtteri Bottas had pipped Lewis Hamilton to pole. The big surprise was the appearance of Nico Hulkenberg in third place in his second week subbing for Sergio Perez; better yet, the Racing Point had fired up successfully. Making it onto the grid alongside Max Verstappen meant that Hulkenberg had already gone a full lap further than he had managed last week.

When the lights went out to get the race underway, the two Mercedes immediately jumped clear, Bottas determined to hold on to the lead despite Hamilton's best efforts. Even thought he was the only driver in the top ten starting on the hard compound tyres, Verstappen got the jump on Hulkenberg for third place; Daniel Ricciardo also tried to make an early pass on the German only to be prevented from passing which gave Lance Stroll the opportunity to pass the Renault on lap 1.

AlphaTauri's Pierre Gasly maintained seventh place followed by McLaren's Lando Norris and Alex Albon in the second Red Bull after Charles Leclerc lost two places into the first corner. However it was Leclerc's Ferrari team mate who proved the big casualty of the start: starting from 11th place on the grid, Sebastian Vettel had got a good start but then cut the first right hander too fine, suffering wheelspin on the kerb which in turn generated a tankslapper that he simply could not hold on to, sending him spinning off the track. He avoided hitting anything and was able to get back underway but was now running dead last as he got his head down and started to work his way back up the order with early passes on Nicholas Latifi and his own former Maranello team mate Kimi Raikkonen. 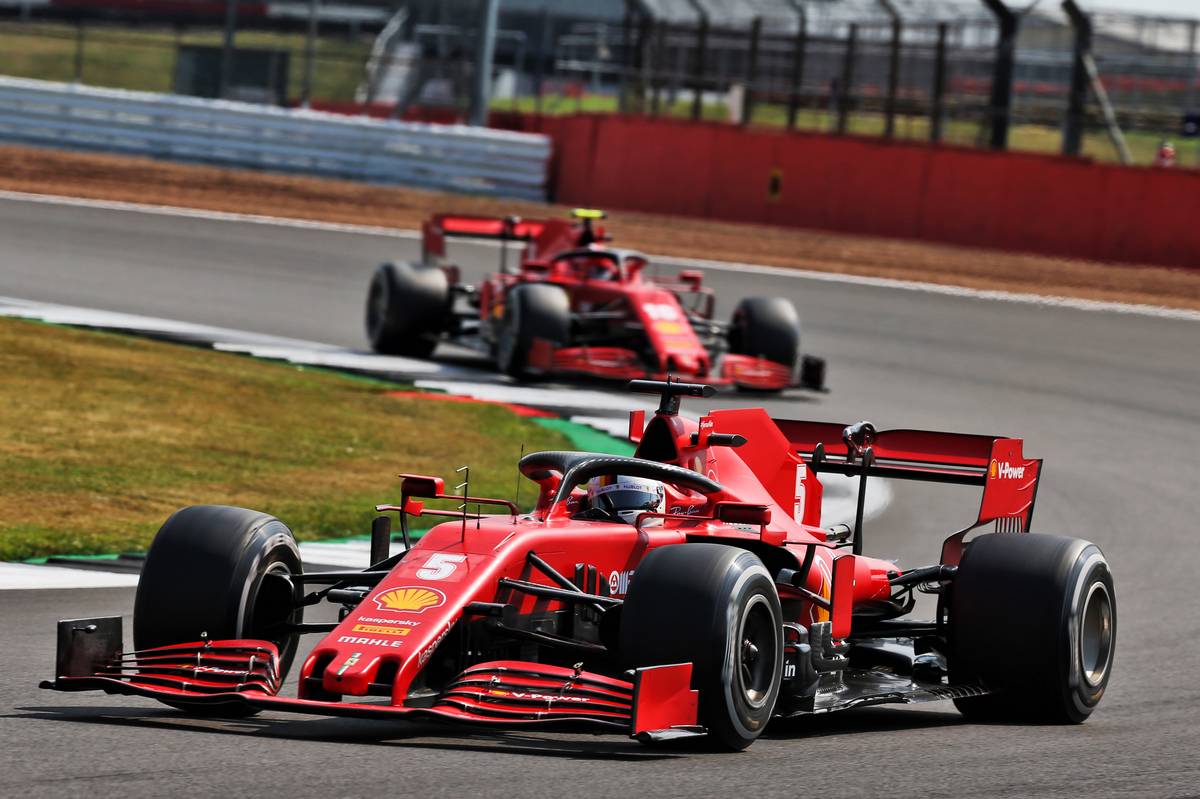 Just seven laps into the race, the Mercedes pit wall was informing the race leader about the state of his tyres: "front left critical, also rear left". Almost as if taking a hint, Red Bull brought in Albon for a very early pit stop to switch him onto the hard compound tyres with Gasly and Norris soon following suit. Meanwhile Verstappen was able to close the gap to the two Mercedes ahead, only to be frustrated by the Red Bull engineers warning him that the tyres were marginal and to take it easy. Max paid no heed and was soon right on the tail of Hamilton - and crucially, within DRS range.

Bottas was the first of the leaders to pit at the end of lap 14, leaving Hamilton to keep Verstappen bottled up for another lap before pitting in turn. That left Verstappen with a ten second lead over Racing Point pair Hulkenberg and Stroll, with Bottas levelling out in fourth place after his stop followed by Hamilton, who had needed to dispatch Leclerc after emerging from pit lane behind the Ferrari but on much quicker tyres,

Hulkenberg stopped at the end of lap 16, returning to the track in seventh well clear of Ricciardo who had also been in for service. Stroll pitted two laps later, leaving the yet-to-stop Verstappen with a 13s lead over Bottas and Hamilton. Moreover he was showing few signs of wear and tear so far, telling the team that "my tyres feel good mate, it's all good" as he started to pull away from his rivals. There were no longer any warnings from the pit wall to be careful: instead they were telling him to push. If anything it was the new tyres on the two Mercedes cars that were already showing alarming signs of renewed blistering. It was a problem also experienced by Gasly, who found himself unable to prevent Albon from passing him for tenth place. Gasly was soon forced to make a second stop of the day on lap 26. 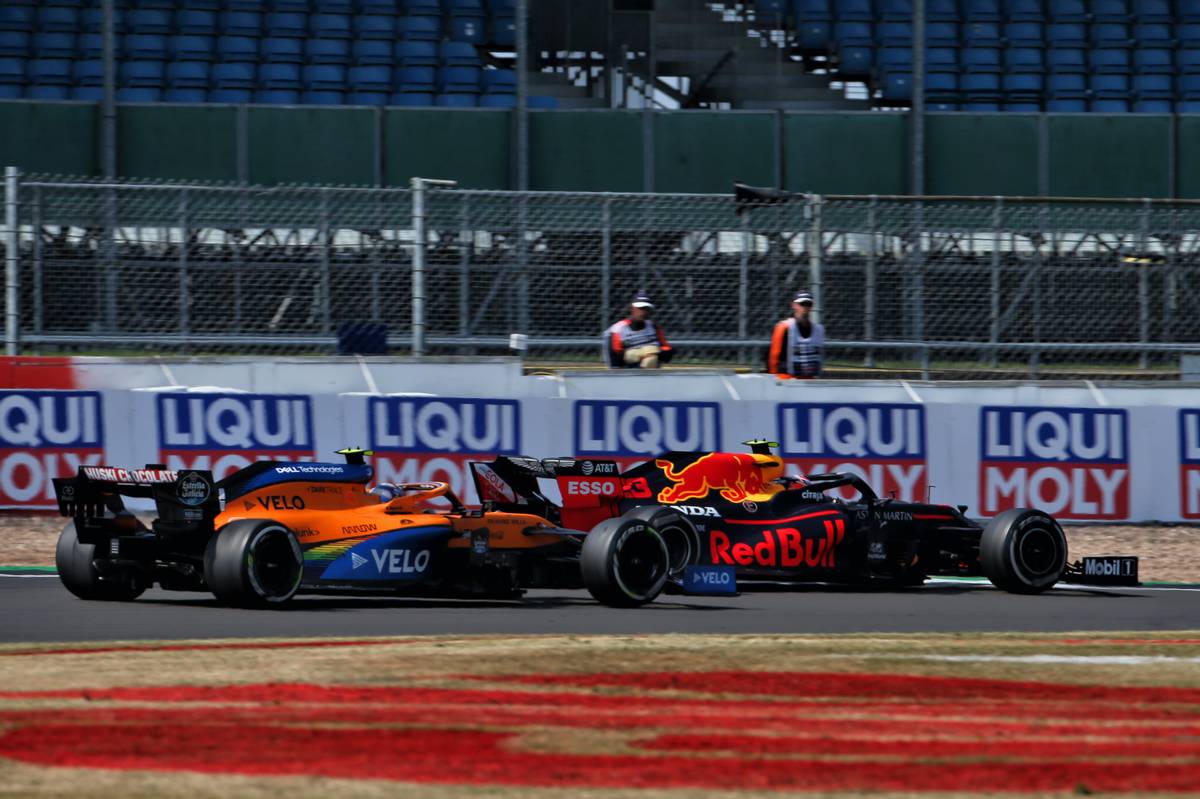 At the halfway point of the race, Red Bull finally called Verstappen in for his pit stop. He came back out just behind the Mercedes, but the fresher medium tyres gave him an irresistible advantage over the next few corners to put himself back in front. It was enough of a disparity to leave a bemused Hamilton wondering out loud whether it was possible that Red Bull had skimped on their tyre pressures in order to give themselves the upper hand.

Verstappen's team mate Albon was also impressing, sweeping past Norris for seventh place on lap 30, the McLaren having also been bested by Leclerc a few laps earlier. It was also glum news for Sainz, whose pit stop was blighted by a wheel gun issue; as a result he had come out just ahead of Vettel who was now fuming at finding himself being held up by the slower car as he attempted to recover from his first lap misadventure. Ahead of them, Ricciardo was trying to find a way past his Renault team mate Esteban Ocon when he lost the rear end and spun off at turn 3 on lap 30, dropping him out of the top ten.

In a case of like-for-like strategies, lap 32 saw both Verstappen and Bottas head for pit lane for new sets of hard tyres leaving Hamilton minding the store but clearly unhappy as he reported: "something wrong's with the car to make the rear left do that." The team reassured him that they were pretty sure the tyres could make it to the end - hardly a ringing endorsement - and Hamilton set about managing the 10s gap he now had over Verstappen and Bottas.

Leclerc was doing a terrific job after making a very early stop and was still running in fourth ahead of Hulkenberg and Stroll, with Albon now up to seventh after making short work of Ocon. Lando Norris and Daniil Kvyat rounded out the top ten followed by Gasly, Vettel, Sainz, Ricciardo, Raikkonen, Latifi and Giovinazzi, while Romain Grosjean, George Russell and Kevin Magnussen were now all a lap down. 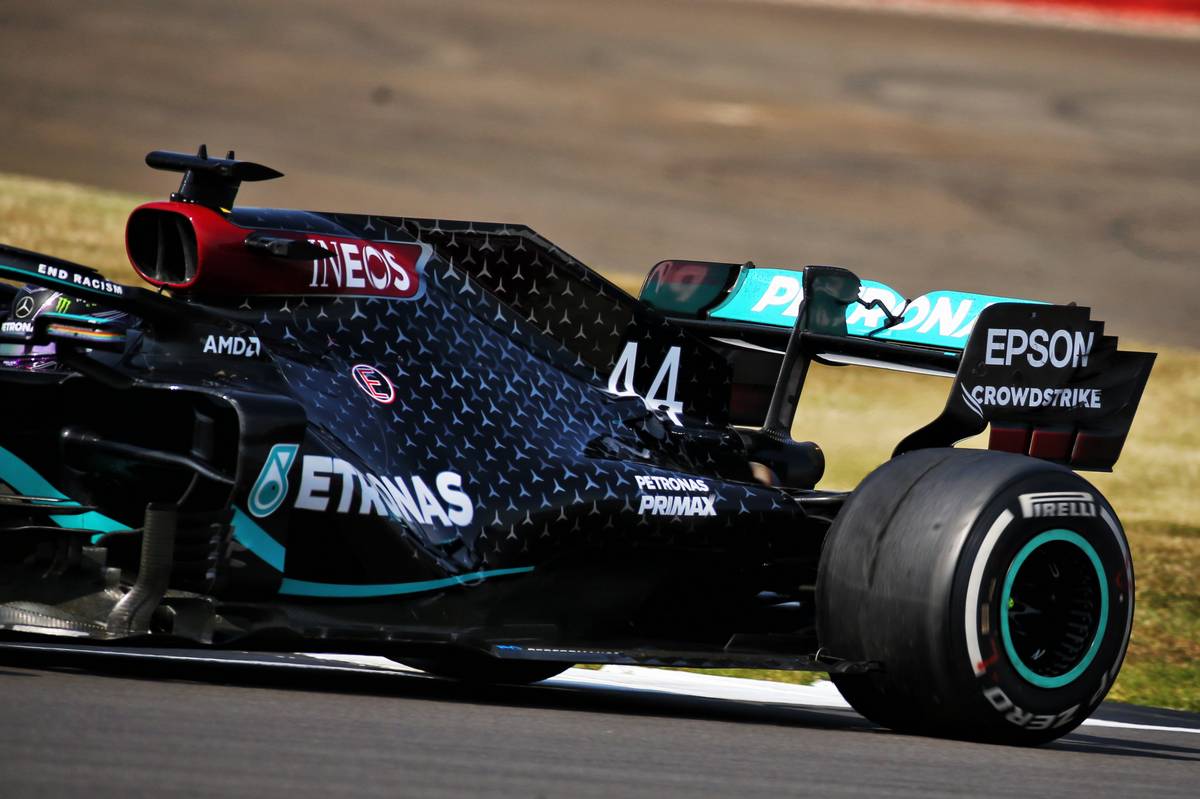 With just over ten laps remaining, Mercedes finally called Hamilton in for his second pit stop of the day dropping him to fourth behind Leclerc, but the Briton was on much fresher tyres and was soon setting new fastest laps that were allowing him to slash into the 11s deficit to race leader Verstappen. He was eventually able to dispatch Leclerc down the Hanger Straight with seven laps left for him to catch the leaders, and then set his sights on his team mate. The Mercedes pit wall made it clear that the pair were free to race so long as they "kept it clean" (code for: don't take out your team mate) and they did just that, but Hamilton's fresher tyres and use of DRS made it a done deal into Brooklands on lap 50 and Bottas bowed to the inevitable.

However that was as good as it was going to get for Hamilton, with Verstappen clearly managing the race and still over nine seconds further down the road. The Dutch driver was feeling relaxed enough to banter with his race engineer as the final laps ticked down, and Verstappen convincingly clinched his first victory of 2020 aver the hot and bothered Mercedes.

Despite his extended second stint, Leclerc was able to hold on to fourth place over Albon, with Lance Stroll up to sixth after a late stop for Hulkenberg dropped the German down to seventh followed by Ocon, Norris and Kvyat meaning that Gasly just missed out on picking up any points.

Vettel's miserable run continued with 12th place followed by Sainz, Ricciardo, Raikkonen, Grosjean, Giovinazzi, Russell and Latifi, with Magnussen the sole retirement of the race after being called in to pit lane in the closing laps. 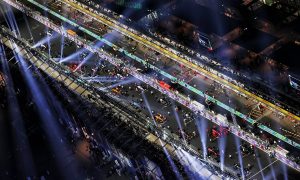 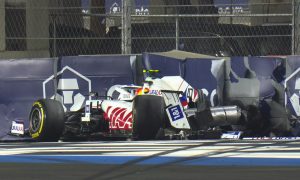