Valtteri Bottas put an end to Lewis Hamilton's recent run of five back-to-back pole positions by posting a new track record time at the Nurburgring in the final round of qualifying for the Eifel Grand Prix.

The Finn's Q3 time of 1:25.269s was a comprehensive 0.256s quicker than Hamilton could manage. It's the first time that Bottas has beaten his team mate on Saturday afternoon since Silverstone in August.

“My last lap in Q3 was spot-on, just what I needed. It was nice to get it together," he told the media in parc ferme after the end of the session.

“It’s such a nice feeling when you get it on the last lap, with your last chance,” he added.

The main challenge for all the drivers on Saturday was losing out on all of Friday's practice sessions due to inclement weather, and the chilly conditions making it difficult to get the tyres up to temperature in order to deliver optimal grip.

“It’s been pretty tricky obviously with the short practice and with these conditions, getting the tyres into the sweet spot on the out-lap," Bottas confirmed. "That was one of the bigger things today.

“There are different things you can try and do on the out-lap, whether it’s braking or doing these kind of things.

"But ultimately I got the tyres there and then the last lap was really nice," he added. "I really enjoyed it.”

He's currently in second place in the driver standings, albeit 44 points behind his team mate with seven races remaining in the 2020 season.

Former world champion Nico Rosberg said that Bottas was doing all the right things if he really wanted to challenge Hamilton for the title. 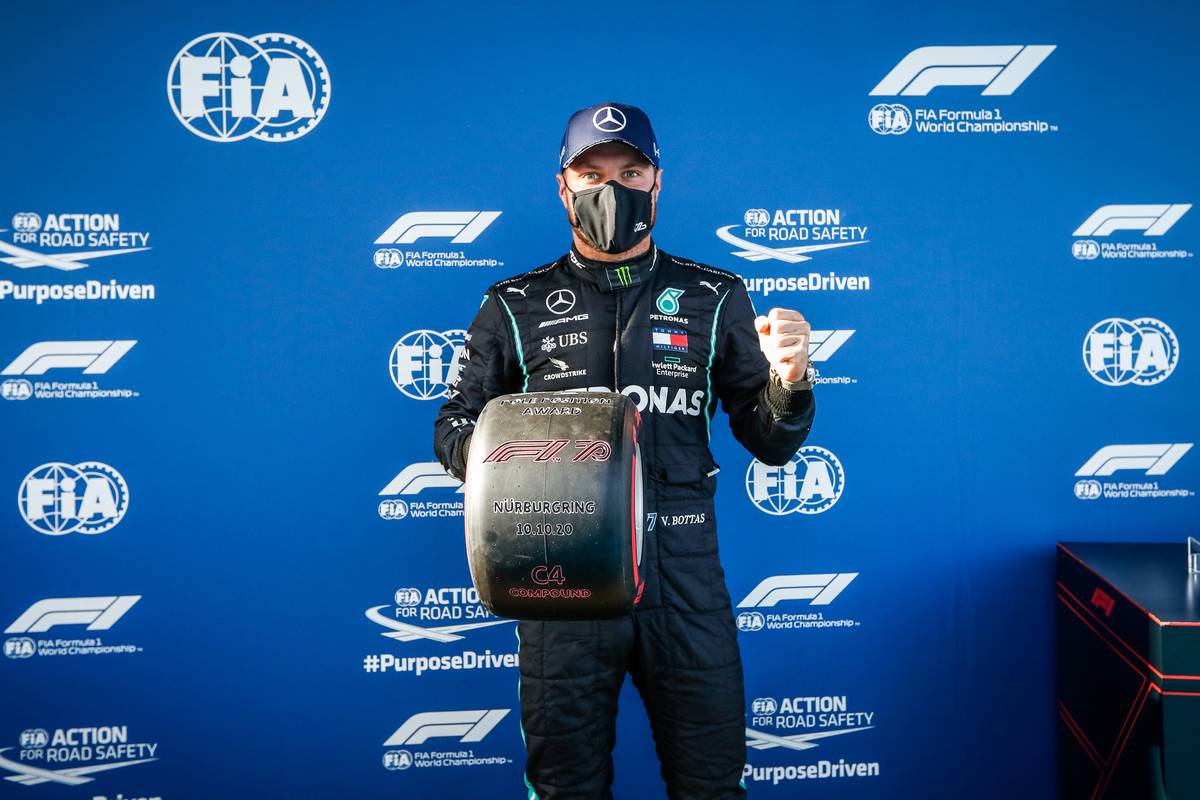 "That lap from Bottas out there was fantastic," he said on Sky Sports F1. "I looked it at and it was like, perfect. And under all that pressure!

"That's exactly the message he needs to send Lewis' way: 'This is not over yet, I'm still in the championship fight."

Bottas himself insisted that he was confident of being able to win again tomorrow and close the gap to Hamilton still further.

"Of course I believe so," he said. "That’s the only goal for tomorrow. Hopefully we can have a good start.”

Hamilton will be alongside Bottas on the front row, with Red Bull's Max Verstappen and Ferrari's Charles Leclerc lining up on row two behind.

The cold conditions meant that everyone used soft tyres to get through to the final pole shoot-out round, and will therefore be starting on that compound in the race.

Hamilton regrets not sticking with mediums in qualifying