Bottas proved to be the master of the 'Ring on Saturday, taking pole position for the Eifel Grand Prix by a solid margin from his Mercedes team mate Lewis Hamilton.

Red Bull's Max Verstappen was looking very competitive throughout qualifying, but ultimately fell short of making it onto the front row of the grid in Q3.

Charles Leclerc enjoyed his best qualifying performance since the summer with fourth place ahead of Alex Albon, but his Ferrari team mate Sebastian Vettel once again missed out on making it through to the final round.

Nico Hulkenberg will start from the back of the grid after having to use his Q1 appearance to get adjusted to the Racing Point as a last-minute replacement for the unwell Lance Stroll. 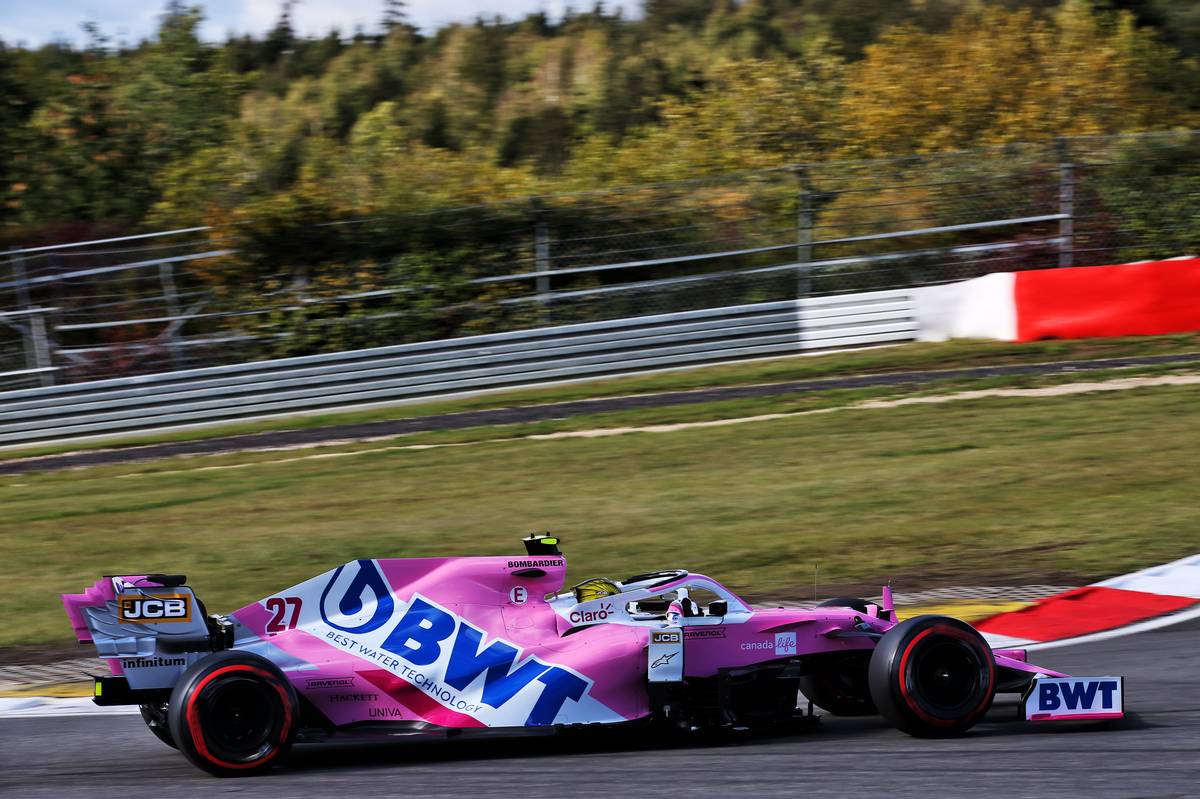 After a complete washout on Friday, things were much drier and brighter for the start of qualifying at the Nurburgring, where the main complaint from the teams was how cold it was. Meanwhile all eyes were on the Racing Point garage for the latest appearance of Nico Hulkenberg, back behind the wheel as a very short notice stand-in for the poorly Lance Stroll.

In need of as much track time as possible, Hulkenberg was among the first group of cars to take to the track at the start of Q1. With Kevin Magnussen's initial time being deleted for running off track, the early honours went to AlphaTauri's Pierre Gasly with a time of 1:28.295s. However it wasn't long before Lewis Hamilton took over with the much faster lap of 1:26.703s, almost a quarter of a second quicker than his Mercedes team mate Valtteri Bottas and Lando Norris slotting into an early third place and Sebastian Vettel a promising fourth for Ferrari.

Vettel's team mate Charles Leclerc went even better and successfully split the two Silver Arrows, before Max Verstappen went quickest of all with a lap of 1:26.319s confirming that the Red Bull was getting its soft tyres up to temperature better than their rivals in the chilly conditions. Bottas improved with his second push and moved ahead of Hamilton, with Alex Albon making an appearance in fifth ahead of Daniel Ricciardo which pushed Norris down to seventh.

Still in data acquisition mode, Hulkenberg was slowest after the first runs. Also in the drop zone were Williams' Nicholas Latifi and the Alfa Romeos of Kimi Raikkonen and Antonio Giovinazzi, with the two Haas cars of straddling the cut line. Latifi's next run then put him into the temporary safety of 13th meaning that Romain Grosjean now joined Kevin Magnussen in the drop zone.

The top four all felt secure enough to stay in the garage for the rest of the session, which saw strong laps from Norris and Ricciardo putting them ahead of Leclerc. The two Haas cards also found good speed, enough to put Magnussen up to 12th, but Grosjean had two times deleted for running wide leaving him in the elimination zone. along with Hulkenberg, Raikkonen and the two Williams drivers Latifi and George Russell. However Giovinazzi had been able to find something special with his final run to squeeze his way through to Q2. 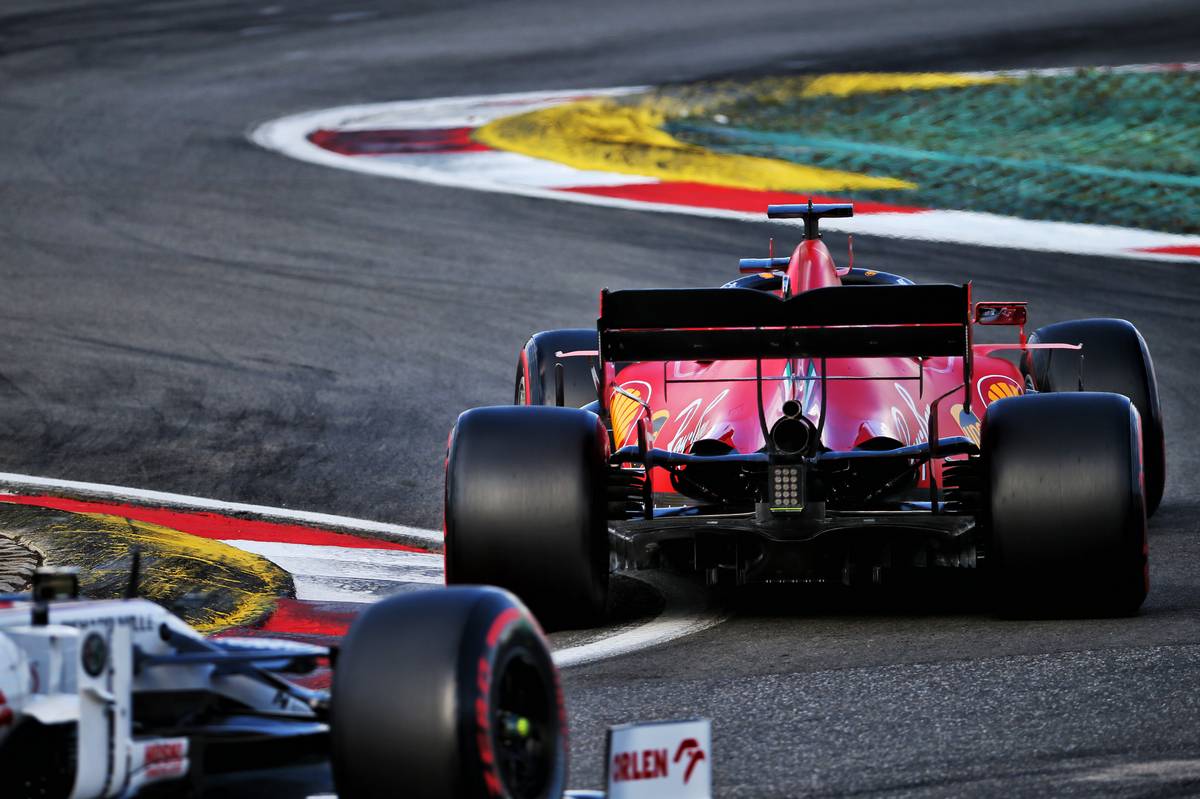 Hamilton and Bottas were the first cars to take to the track at the start of Q2 having opted to run the medium compound despite the cold conditions causing problems with grip. Ferrari were trying a similar gambit while Verstappen and Norris were among the majority of drivers straight on to the soft tyres.

Hamilton set the initial pace with a time of 1:26.183s ahead of Norris and Perez, but Verstappen improved on that by almost half a second with his own run and Alex Albon then clocked in to third just a tenth slower than Hamilton. Good laps from Esteban Ocon and Carlos Sainz had pushed Bottas down to eighth just ahead of Leclerc and Ricciardo, while Vettel was on the wrong side of the cut line along with Giovinazzi, Magnussen, Daniil Kvyat and Pierre Gasly.

It was soft compound tyres all round for the second runs, which saw immediate improvements for Hamilton, Verstappen and Bottas to ensure their progression into the final round; Hamilton's 1:25.390s proved to be a slender 0.077s quicker than Verstappen with Bottas half a second in arrears. There were also strong laps from Ricciardo and Leclerc to claim fourth and fifth ahead of Albon, Norris, Perez and Carlos Sainz, while Esteban Ocon was the final man to make it through. Missing the cut were Vettel, Gasly, Kvyat, Giovinazzi and Magnussen. 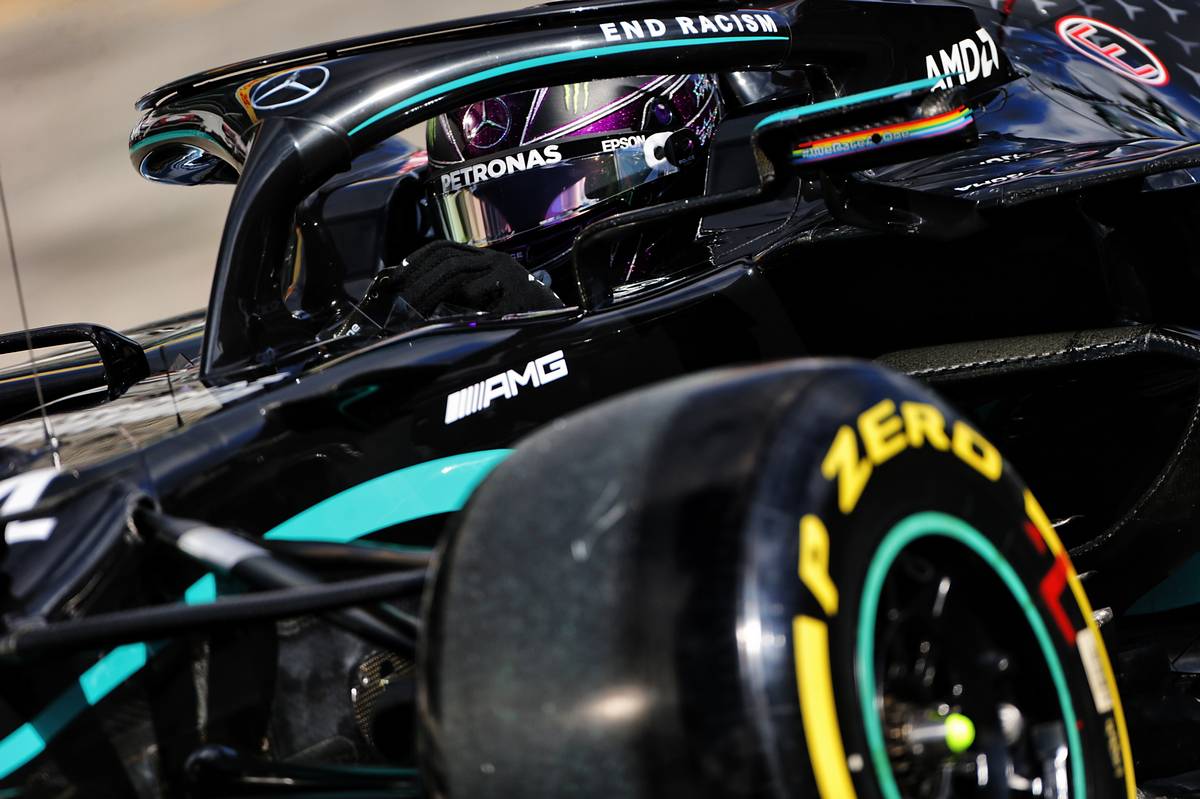 Q3: Bottas comes out on top as Mercedes lock-out the front row from Verstappen and Leclerc

With Hamilton and Verstappen looking so closely matched, it was still very much all to play for when the lights at the end of pit lane went green for the start of the final top ten pole shoot-out round. The two McLarens of Carlos Sainz and Lando Norris were first out followed by both Mercedes, with only Racing Point's Sergio Perez opting to hold his fire for the time being.

Norris pipped his team mate but was then eclipsed by Hamilton to the tune of 1.5s. Bottas narrowly beat Hamilton's time, but Verstappen then took provisional pole with a time of 1:25.744s putting him 0.068s quicker than the Finn. There was little between the top three who were still half a second ahead of Albon and Leclerc, with Perez' delayed run eventually proving enough for sixth ahead of Ocon, Norris, Sainz and Ricciardo.

The final runs of the day saw an improvement for Hamilton, but not enough to stay ahead of Bottas who recorded three purple sectors to claim pole with a time of 1:25.269s. Verstappen lost time in the final sector and found himself unable to improve on third place, which briefly appeared to consist of an all-Red Bull before Leclerc's final push proved just enough to depose Albon by 0.012s.

Ricciardo will start alongside Albon from sixth, with his team mate Ocon on the row behind shared with Norris. Perez' single run proved enough to secure ninth ahead of a frustrated Sainz.

Hulkenberg's Eifel call-up 'even wilder and crazier than last'