As a new venue, the Autódromo Internacional do Algarve has offered teams many challenges to master or surmount.

From the 4.6km track's undulating layout to its striking elevation changes and blind corners, from its newly re-laid tarmac short of grip to changing wind conditions, Portimão has slowly revealed its character and features.

In theory, the track caters to higher downforce levels, but the Algarve circuit's single straight that offers drivers the only real overtaking opportunity has required drivers to choose the best set-up compromise between being fast in the corners and protecting their top speed on the straight.

McLaren appears to have reached an adequate balance between the two criteria, with Carlos Sainz clocking in P7 in qualifying while topping the speed trap readings with a top velocity of 330 km/h.

Just behind the Spaniard, Alfa's Antonio Giovinazzi obviously opted to trim his C39 to the max, but the Italian's strong top speed still left him only P17 on the grid.

The numbers tell us that Turn 1 will likely see a lot of action this afternoon. 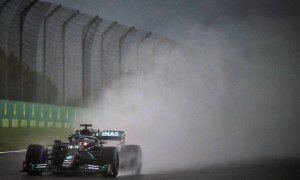