Rapidly evolving weather conditions meant that an early switch to intermediates in the final round gave Stroll a crucial advantage, allowing him to set a time of 1:47.765s - almost three tenths quicker than Red Bull's Max Verstappen who had earlier been quickest in both Q1 and Q2.

Sergio Perez confirmed the team's pace with third place ahead of Alex Albon, while there were storm clouds at Mercedes after Lewis Hamilton was just sixth fastest and Valtteri Bottas ninth.

Qualifying had earlier been disrupted by two red flag stoppages in Q1, the first for heavy rain. Ferrari's Sebastian Vettel and Charles Leclerc both missed the cut at the end of the second round, as did McLaren drivers Lando Norris and Carlos Sainz. 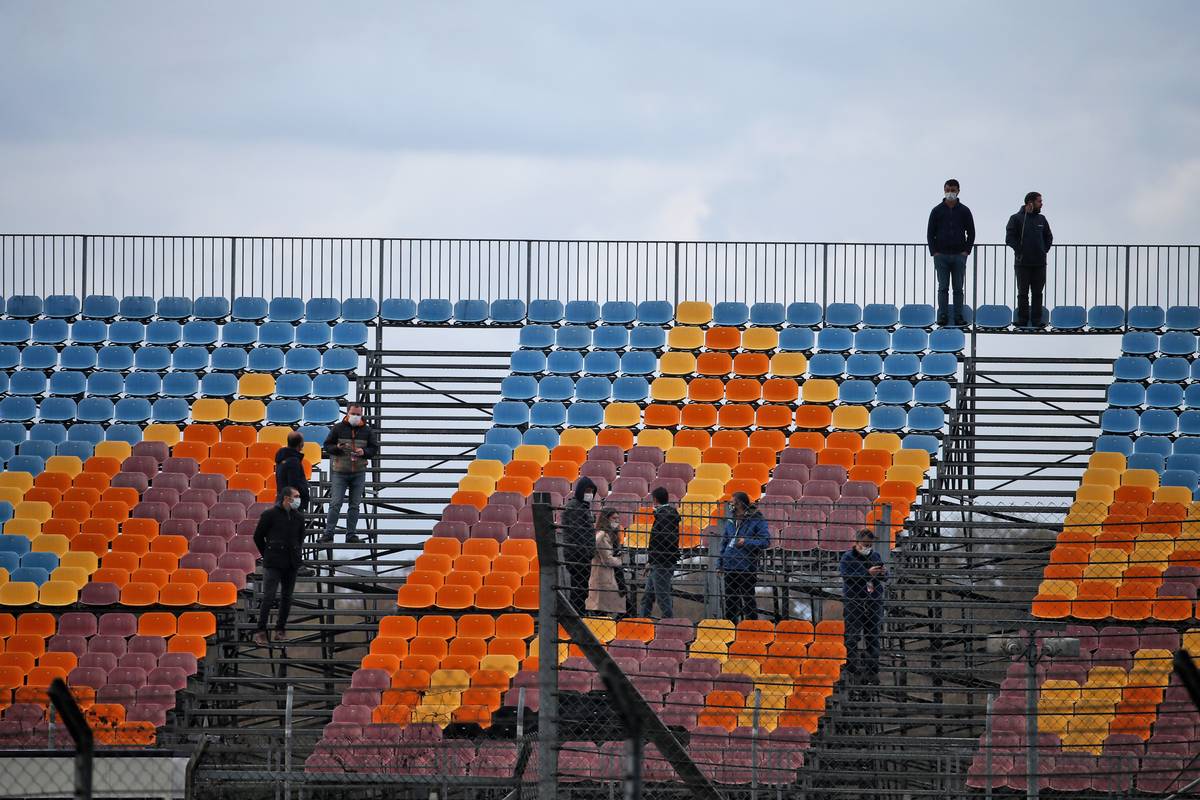 The morning rain that had hit final practice might have moved on, but conditions at Istanbul Park remained tricky for the start of qualifying. The newly resurfaced track - already shockingly low in grip - was still cold and soaking wet when the cars rolled out at the top of the hour. To add to the spice of the occasion the marshals had been busy chasing a stray dog that had found its way into the facility - and displayed rather better grip and handling in its run through the corners than the F1 cars could manage.

The drivers were early to start queuing on pit lane waiting for the lights to turn green and the session to begin. Red Bull's Max Verstappen was at the head of the field with the team opting to put him on intermediates, but he suffered with a sideways spin within seconds of starting his run and also briefly ran off at turn 9. Team mate Alex Albon was also finding the going to as treacherous as predicted.

The early pace was set by Valtteri Bottas whose Mercedes put in a time of 2:07.001s on full wets, four tenths quicker than Renault's Esteban Ocon on the same compound. Both men improved with their second runs but Bottas' time was deleted for exceeding track limits, leaving Ocon top. Racing Point pair Lance Stroll and Sergio Perez were the fastest of the cars using intermediates, with Lewis Hamilton merely fifth ahead of McLaren's Lando Norris. When he finally set a time, Verstappen was still only good enough for 15th - putting him at risk of elimination.

By now the rain had picked up again and quickly intensified, resulting in a number of cars aqua-planing and spinning despite everyone having moved onto full wets. Race control had no option but to red flag the session with just under seven seconds on the now-stopped clock. Currently missing the cut by seven thousandths of a second was Ferrari's Charles Leclerc, joined in the drop zone by Haas' Romain Grosjean, AlphaTauri's Pierre Gasly and Williams pair George Russell and Nicholas Latifi. 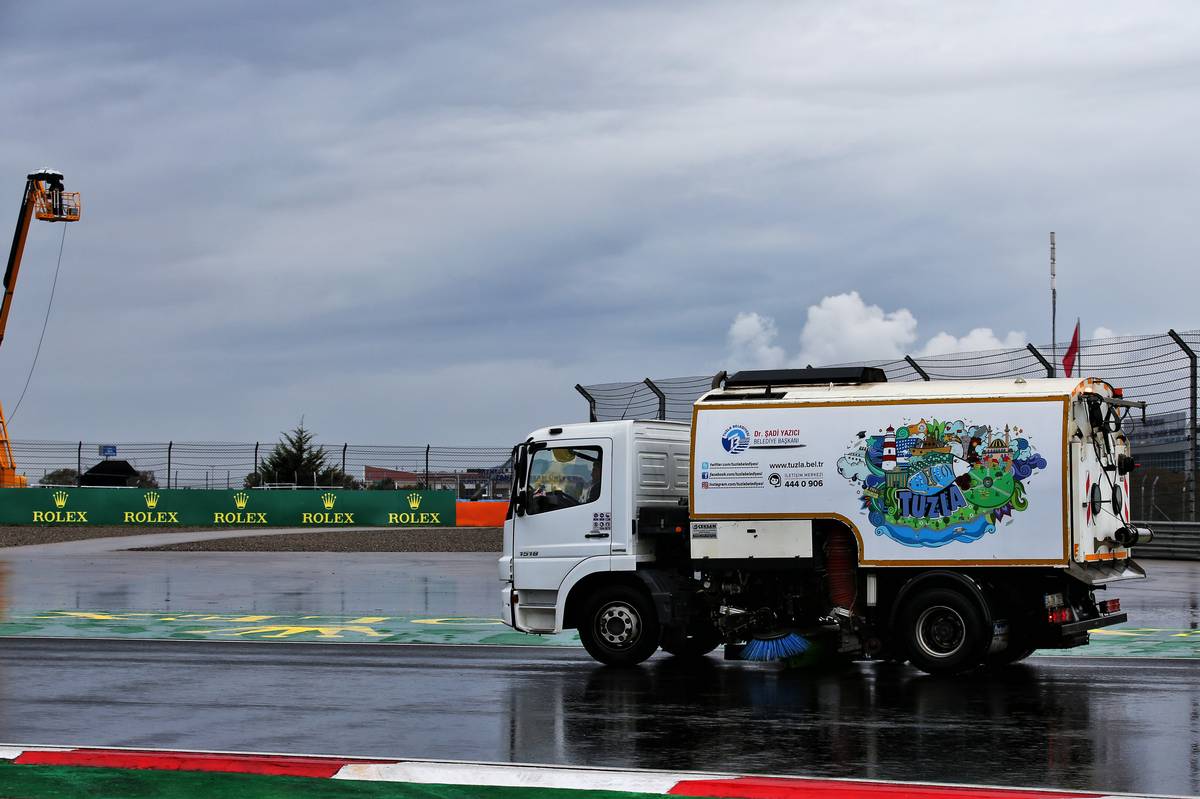 The squall quickly moved on and after a prolonged pause while track workers dried off key parts of the circuit with track sweepers, the session resumed following a 45 minute hiatus. Both Red Bulls and both Ferraris were among the cars at the head of the queue waiting for an extended period before the lights at the end of pit lane went green.

Everyone was on full wets but an early spin for Kimi Raikkonen in the Alfa Romeo vividly demonstrated how poor the conditions remained. Leclerc was the driver most under pressure, and he ran off at turn 1 at the start of his flying lap. Soon after, Grosjean did the same - but in his case the Haas ended up beached in the gravel forcing race control to throw a second red flag while the car was recovered, before anyone could complete a timed lap.

With now just three and a half minutes left when the session resumed, there was only time for one final push lap. Verstappen made no mistakes and went a full eight seconds faster than Ocon's previous benchmark. The improving conditions meant that the first six cars on track including Albon, Raikkonen, Vettel and Leclerc all went to the top, but further back amid a number of yellow flags Hamilton ran wide and came close to being pushed into the drop zone by the time the session ended. In the end he survived in 14th place ahead of Perez, while those missing out were Kevin Magnussen and his team mate Grosjean along with AlphaTauri's Daniil Kvyat and the two Williams drivers. 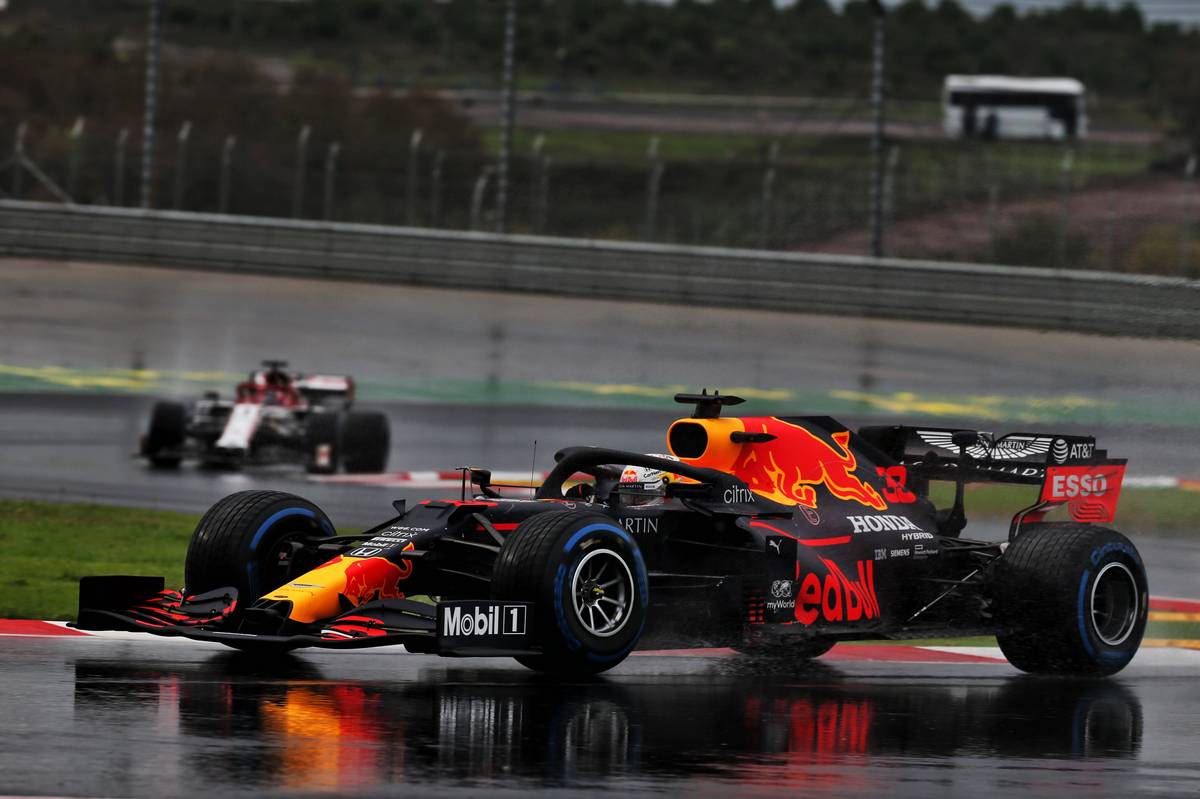 The second round went ahead as scheduled despite the trackside presence of a truck retrieving Nicholas Latifi's car after the Williams had spun into the gravel at the end of Q1. McLaren gambled on inters for Norris and Sainz, but everyone else stuck to the full wets and it was Red Bull who came out on top with Verstappen posting a first effort of 1:57.125s, followed by the Racing Points of Perez and Stroll. Mercedes were only good enough for fourth and fifth for Bottas and Hamilton respectively.

Raikkonen continued with his strong run, punching in a time only 0.087s off Verstappen to spring into second. Albon then found his sea legs to go top with a time of 1:56.721s only to be quickly pipped by Stroll by almost a full second as the track conditions continued to improve by the minute. Verstappen's next push lap was a vastly improved 1:53.486s while Perez climbed to second place only six tenths behind. This was followed by better laps from Bottas and Hamilton sending Stroll back down to fifth ahead of Raikkonen, Daniel Ricciardo and Antonio Giovinazzi.

McLaren's inters strategy hadn't paid off and they were down in the bottom five along with both Ferraris and Pierre Gasly as the final laps commenced. Verstappen's time was now down to 1:52.036s while Bottas and Hamilton were also getting stronger as the session proceeded, moving into second and third ahead of Albon, Perez and Stroll.

A final barrage of increasingly fast laps resulted in Verstappen keeping the top spot with a time of 1:50.293s, two seconds faster than his team mate Albon, while Hamilton improved to third ahead of Stroll, Giovinazzi, Ocon, Bottas, Raikkonen, Perez and Ricciardo. Neither McLaren nor Ferrari were able to crack the top ten with either car, and Gasly finished slowest in the round. 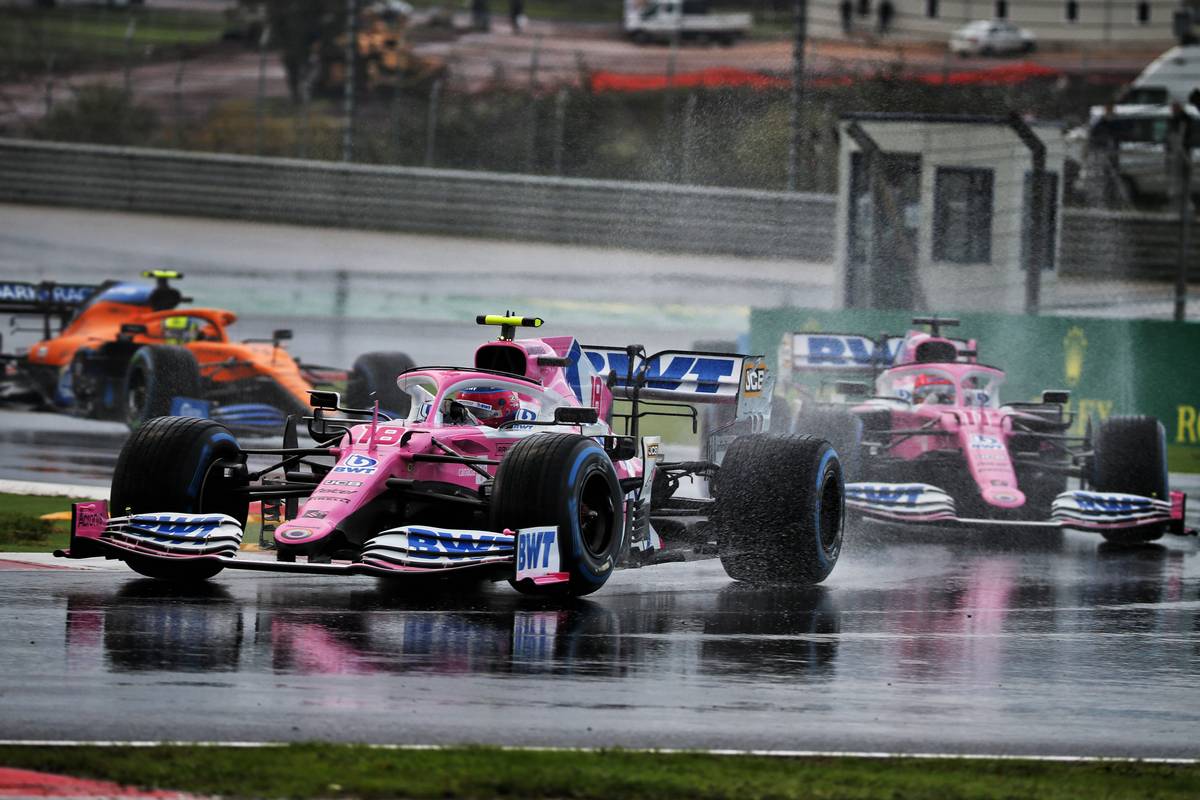 Q3: Intermediates boost Racing Point to the top with pole for Stroll

Verstappen continued to shine as the final round got underway, his opening time of 1:52.326s a whopping four seconds faster than Bottas and Albon. Stroll emerged as the surprise strongest contender to the Dutchman's crown, but even so the Racing Point was still 1.5s behind the Red Bull. However while everyone else was on full wets, his team mate Perez had opted for intermediates and immediately proved their worth with a response of 1:52.037s. Red Bull immediately reacted by aborting Verstappen's next lap by calling him in for a change of tyres.

Perez continued to push and his final lap clocked in at 1:49.321s, three seconds quicker than Verstappen; Stroll confirmed the Racing Point's performance on inters by going 1.5s quicker to claim provisional pole. Verstappen had time for one final push, but it proved only good enough for second. Albon also improved at the end of the session to pick up fourth ahead of Ricciardo who was the highest-placed of those still on the full wet compound.

Hamilton had been dubious of the call to switch to inters and in the end only managed sixth place ahead of Ocon and Raikkonen, while Bottas was a disappointing ninth on the grid followed by Giovinazzi meaning that the Silver Arrows will have it all to do on Sunday. However a number of stewards post-race investigations for incidents under the numerous yellow flags could yet shake-up the grid order.