Lewis Hamilton clinched his seventh Formula 1 world championship with an unexpected but tactically brilliant victory in the 2020 Turkish Grand Prix at Istanbul Park.

The race had started poorly for Mercedes which saw Valtteri Bottas sent into the first of many spins. But as the initial wet conditions dried out, pole winner Lance Stroll lost command of the race and slipped out of contention.

His Racing Point team mate Sergio Perez held on to take second from Sebastian Vettel who came out best from a final lap scrambled with his Ferrari team mate Charles Leclerc.

After Saturday afternoon's eventful qualifying, the last thing that the teams and drivers wanted to see on Sunday was more rain. But an hour before the scheduled start of the race that's exactly what they got, making even the initial out lap to their grid spots an adventure in itself as Antonio Giovinazzi and George Russell found to their cost. Williams decided to start Russell and his team mate Nicholas Latifi from the relative safety of pit lane instead, leaving just 18 cars on the grid headed by surprise first-time polesitter Lance Stroll. 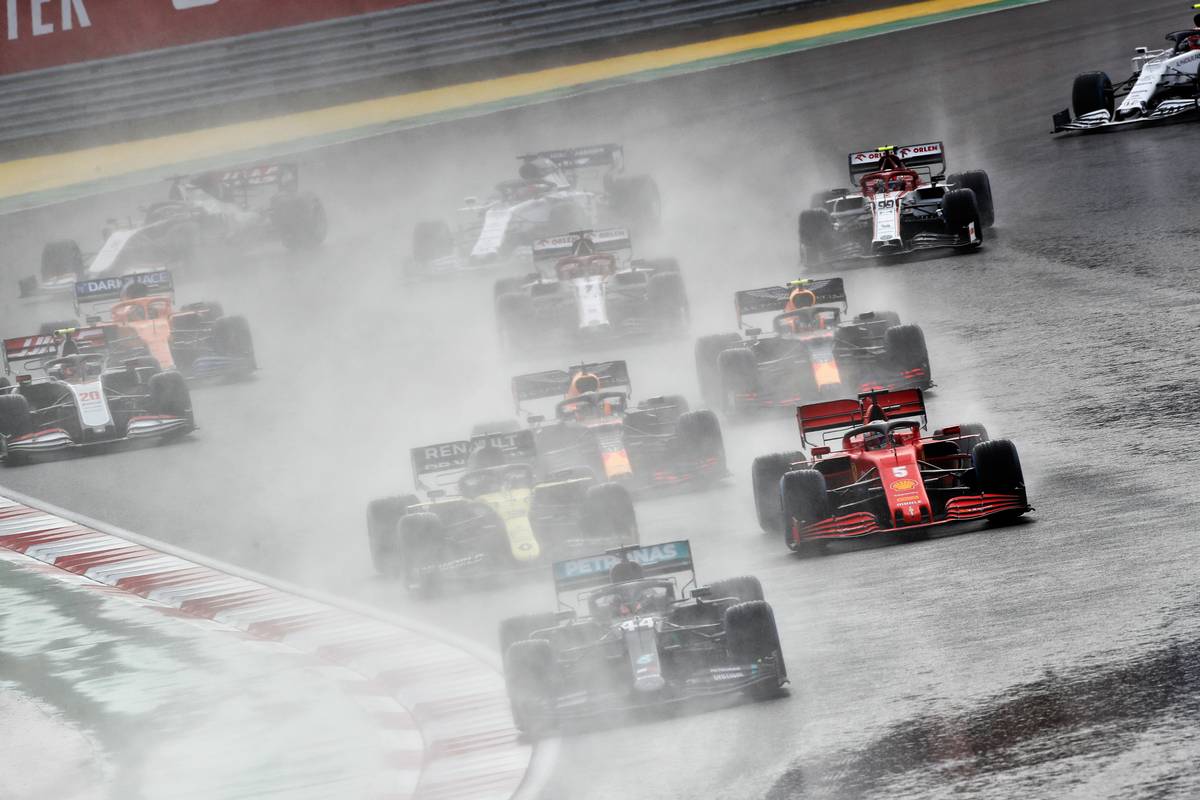 Flying start for Racing Point and Vettel, but Verstappen and Hamilton struggle

Although the rain had stopped sometime before the lights went out, the track remained thoroughly soaked as the race began. Stroll and his Racing Point team mate Sergio Perez achieved excellent launches and headed into turn 1 in first and second, while Max Verstappen nearly stalled and then struggled to get up to speed. By the time he recovered he was startled to find himself not just in fourth place, but behind Sebastian Vettel whose Ferrari had flown up the order from its starting position of 11th on the grid.

Lewis Hamilton had made up positions at the start but then promptly lost them again as the Mercedes continued to struggle for any kind of grip on the newly resurfaced track. But at least he fared better than his team mate Valtteri Bottas, who was tapped into a spin at turn 1 by Esteban Ocon who himself had been clipped by his Renault team mate Daniel Ricciardo. A second spin on the opening lap meant that the Finn was left in 18th place, and while he was soon threading his way back through the slower cars ahead it seemed like there was little chance of keeping his title hopes alive now.

By lap 5 Stroll had pulled out a six second lead over Perez, with Vettel eight seconds further back followed by Verstappen and his Red Bull team mate Alex ALbon. Hamilton had steadied himself in sixth ahead of Ricciardo, followed by Kimi Raikkonen who was soon passed by McLaren's Carlos Sainz. Kevin Magnussen rounded out the top ten, while Giovinazzi had recovered from his pre-race incident and pit lane start to leap up to 11th ahead of the two AlphaTauris. 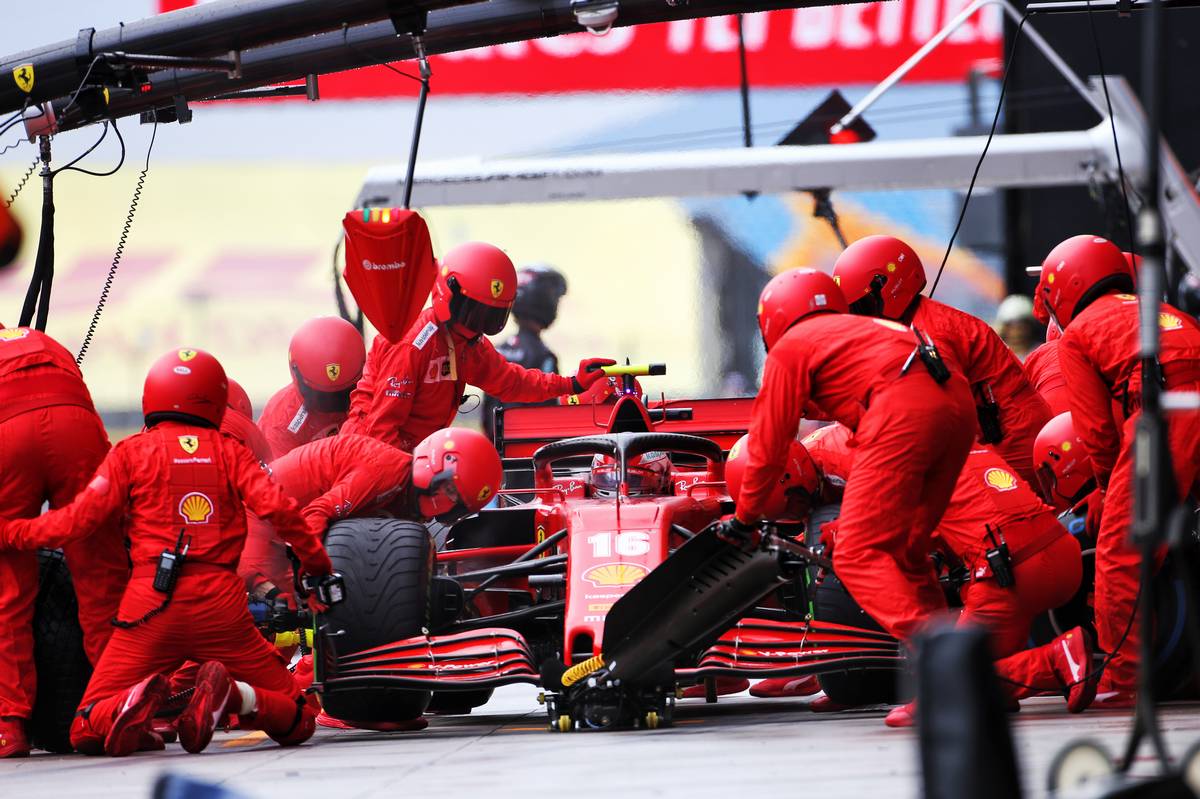 With each passing lap the circuit was starting to develop a dryer line causing the full wet tyres to overheat, and the field started to close up on the two Racing Points. Charles Leclerc rolled the dice and pitted on lap 7 for intermediates, with Bottas following suit a lap later given that he had little to lose at this point after his first lap misadventures. Their respective team mates Vettel and Hamilton were in on lap 9 dropping them to seventh and eighth respectively.

Racing Point were forced to respond and called Stroll in for service next time by and he returned to the track in fourth. Perez and Ricciardo were both in moments later, but Red Bull tried to extend their first run leaving Verstappen and Albon running 1-2 albeit significantly slower than those now in the inters. Verstappen was finally ordered in - somewhat reluctantly - on lap 12 and the strategy narrowly paid off as he returned to the race just ahead of Vettel and Hamilton who were locked in battle for fifth place.

Albon was the last driver to switch to the intermediates, dropping him to sixth place which restored Stroll and Perez to the lead. The race was briefly neutralised on lap 13 by a Virtual Safety Car to allow marshals to recover Giovinazzi's battered Alfa Romeo which had finally crawled to a stop at turn 9. When the race resumed Hamilton threw everything into attacking Vettel as the Ferrari squirmed on cold tyres, only to lock up himself in turn 12 opening the door for Albon to steal the position. The Red Bull was then quick to easily out-brake Vettel into turn 7 to make up two positions in less than a lap. 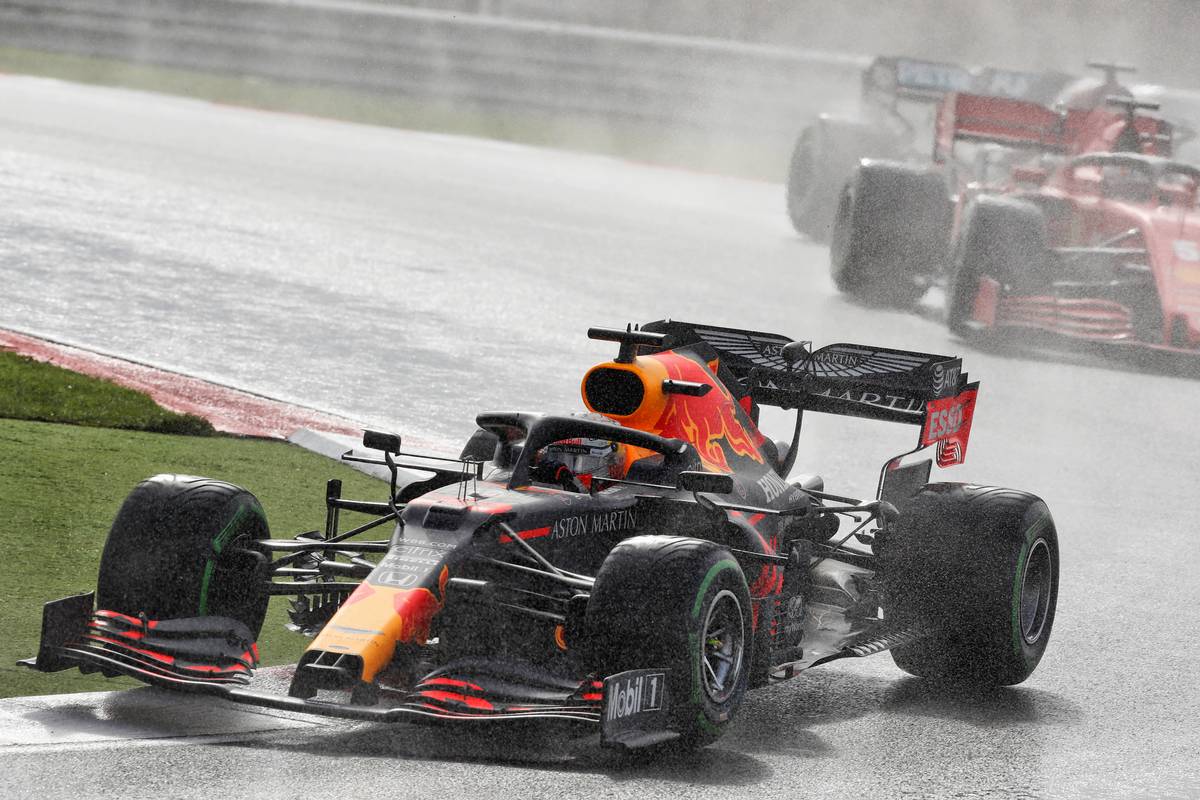 Verstappen spins out of podium contention

Albon started to close up to his team mate who by now was right on Perez' tail. The Dutch driver thought he saw a chance to overtake down the inside into turn 11 but got drenched in the rooster tail of water thrown up by the Racing Point. His car lost grip and went into a wild spin, pirouetting first one way and then the other down the straight but crucially keeping off the barriers so that he was able to continue albeit with flat-spotted tyres that obliged him to pit for a new set of inters, returning him to the fray in eighth place.

The drying line meant that the intermediate tyres were now starting to overheat, but deep puddles in parts of the track meant slicks remained out of the question. The situation didn't suit the two Racing Points, allowing Albon, Vettel and Hamilton to draw ever closer as DRS was enabled for the first time on lap 30. When Leclerc pitted for a second time from ninth place on lap 31 he opted for a new set of inters, and Raikkonen made the same selection when he pitted a lap later. although a slow service dropped him to 17th. Ricciardo was in on lap 33 after losing spots to Sainz and Verstappen, and also chose to stay on the inters.

The stalemate at the front was broken on lap 34 when Vettel pitted, but he too suffered a slow stop with problems attaching the rear right wheel. A more dramatic development saw Albon lose the back end of his Red Bull at turn 4 and spin off, dropping him to sixth and allowing Hamilton up take third ahead of Verstappen and Vettel. Racing Point were finally forced to react on lap 37 by summoning Stroll to pit lane which briefly left Perez in charge, but Hamilton then sailed past him using DRS into turn 12 to take the lead for the first time. 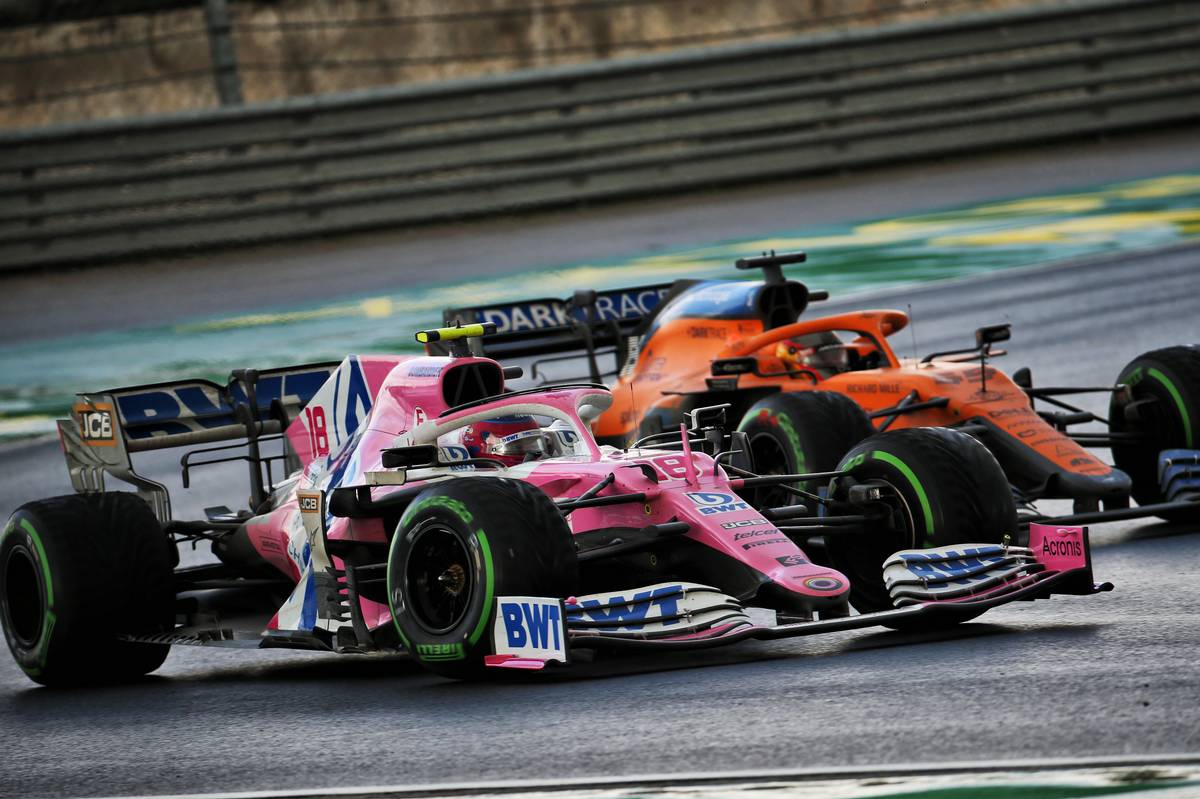 As Hamilton opened up a huge lead at the front, the day was starting to unravel for Stroll who was already complaining of graining on his new set of intermediates which enabled Vettel to pass him on lap 40. When Stroll counterattacked at turn 12, it only succeeded in opening the door for Leclerc to pass him as well. The Monegasque then went on to dispatch his team mate for fourth place. Stroll continued to struggle and soon found himself behind ALbon and Sainz, shattering his dreams of a maiden race win.

With 15 laps to go Hamilton continued to find impressive speed on his worn inters, giving him a 14s lead over Perez and about to lap his team mate after Bottas had suffered further spins. Hamilton now had nearly half a minute - a full pit stop - over Leclerc who had taken up third place as Verstappen came in for his second stop of the day. Vettel continued to run in fourth place followed by Sainz who had just got the better of Albon as Verstappen slotted back in just behind his team mate. Meanwhile Norris took up ninth place behind Stroll after a slow speed spin for Ricciardo who had drifted off line into turn 12.

No one had switched to slicks, and a poor lap for Leclerc showed why it was still too dangerous. It was followed by spins at turn 4 for Albon and Verstappen as they lapped Raikkonen who also went around. Verstappen recovered best but that was the end of any talk about dry weather tyres: Hamilton was adamant that he was fine on his old inters which had effectively 'melted down' to de facto slicks anyway giving him a six second a lap advantage over Bottas who was now on a new set of the same compound. There were also warnings from pit wall of incoming heavy rain before the finish. 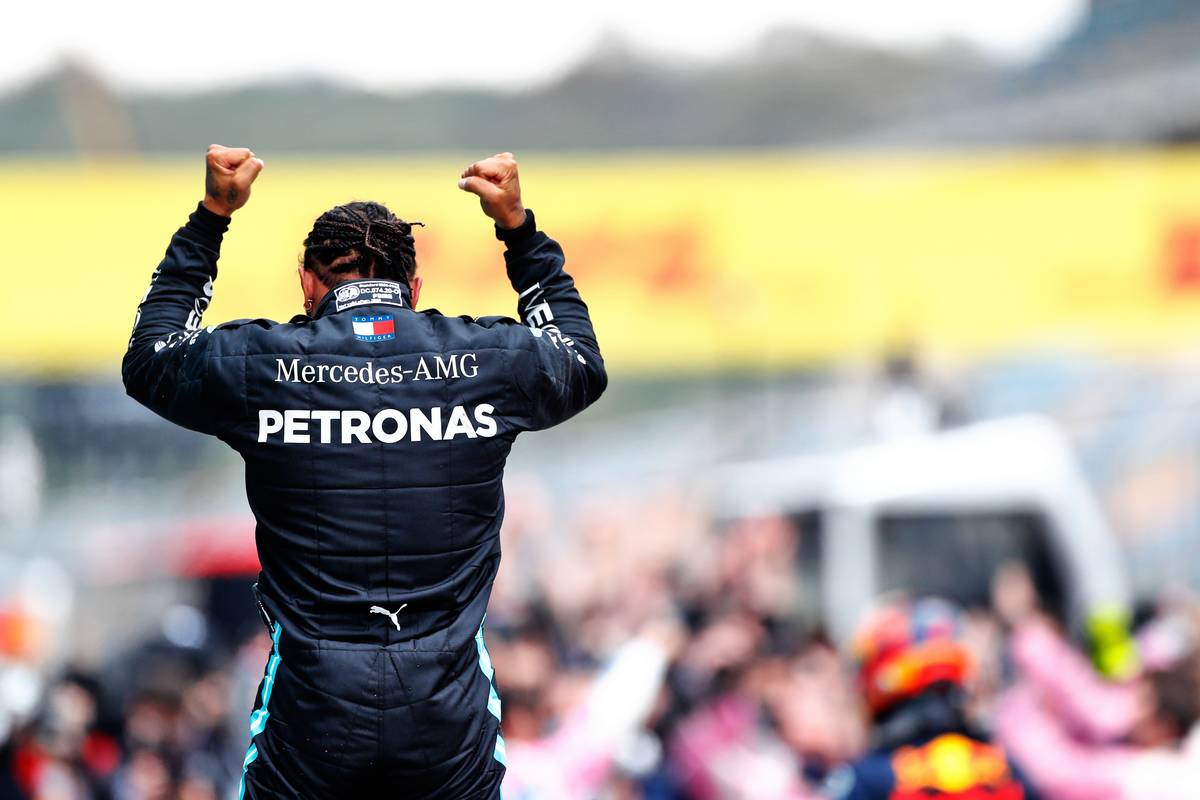 Hamilton claims seventh title ahead of Perez and Vettel

The threat or rain was enough for Mercedes to consider a safety second pit stop for Hamilton, but the Britain countermanded the call and stayed out. He was proved right, and the rain held off long enough for him to cross the line to claim his seventh title. Meanwhile Perez almost lost second place to Leclerc when he locked up on the final lap, but the Ferrari then ran wide allowing Perez to recover the position and also for Vettel to steal the final podium place at the last second.

Behind Leclerc, Sainz picked up fifth for McLaren followed by Verstappen and Albon, with Norris taking the point for fastest lap as he finished in eighth ahead of Stroll and Ricciardo. Ocon just missed out on the points in 11th ahead of Daniil Kvyat and Pierre Gasly, while Bottas was a miserable (by his standards) 14th ahead of fellow Finn Raikkonen. George Russell was the last man still running after retirements for Haas pair Romain Grosjean and Kevin Magnussen on laps 49 and 55, and a spin for Latifi on lap 39.

Hamilton: 'I feel like I'm only just getting started'