While not a proper power circuit, the Bahrain International Circuit does incorporate a couple of decent straights where strong velocity can offer an edge.

Last year's event showcased the mighty output of Ferrari's power unit, with Charles Leclerc securing pole and only missing out on his maiden Grand Prix win for the fault of a technical issue.

But this year, the Italian outfit's engine has been a liability rather than an asset, as the Scuderia's performance in qualifying on Saturday demonstrated once again, although the aero deficit of its SF1000 was also a factor in Sebastian Vettel and Charles Leclerc's disappointing performance.

Daniel Ricciardo's Renault was the field's fastest car down Sakhir's main straight with a top speed of 328 km/h and was unsurprisingly followed by the R.S.10 of teammate Esteban Ocon. The pair qualified respectively sixth and seventh.

A usual, Williams trimmed its FW43 to the max to try and pull George Russell up the order, the Briton clocking in third fastest, but qualifying P14.

As usual, a few contenders demonstrated the relative importance of top speed, or rather the necessity to strike the best compromise between drag and handling.

Max Verstappen was a laggard on the straight in qualifying - over 10 km/h slower than Ricciardo, yet the handling qualities of Red Bull's RB16 more than made up in Bahrain's corners for the car's top speed deficit.

A similar remark applies to poleman Lewis Hamilton's Mercedes, but Verstappen's teammate Alex Albon was significantly faster than the Dutchman down the main straight, yet conceded 0.596s to the latter at the end of his best qualifying lap, perhaps indicating different aero set-ups in the Red Bull camp. 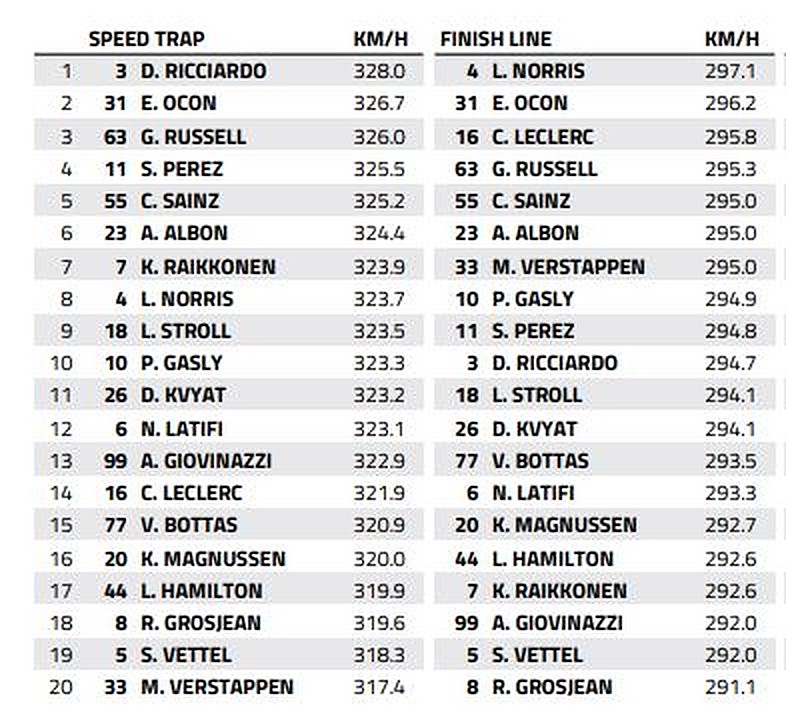