Otmar Szafnauer says 2020 was "a year of missed opportunities" for Racing Point, but the team boss says his troops will come back stronger next season under the Aston Martin Racing banner.

Racing was pipped to third by rival McLaren in the Constructors' championship in F1's season finale in Abu Dhabi on Sunday, having lost Sakhir GP winner Sergio Perez in the early stages of the race following an engine failure while Lance Stroll could only deliver a single point to his team at Yas Marina.

"A difficult evening where things didn’t go our way," said Szafnauer after the disappointing race.

"Lance’s race was heavily compromised by being held up by Sainz deliberately driving slowly in the pit lane, while Sergio retired on Lap 10 with a loss of power.

"Those developments left us facing an uphill task to retain third place in the constructors’ championship and we finished just seven points shy of that goal in the end."

For Szafnauer, Sunday's events reflected a year of missed opportunities for Racing Point. But the American's assessment also included positives, like Perez's win at Sakhir, that will constitute the foundation of the team's strength in 2021.

"It’s been a year of missed opportunities for several reasons – including more than our fair share of bad luck that cost us valuable points," said Szafnauer.

"We will take the disappointment tonight in our stride and focus on the positives of an incredibly strong season where we enjoyed some great moments.

"We have shown that we have a competitive car and team, which will give us a great base to come back even stronger in 2021 under the Aston Martin name."

Verstappen: Abu Dhabi win not a sign of early success in 2021 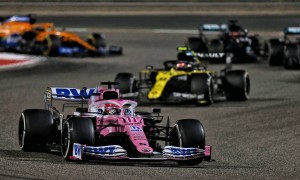