French broadcaster Canal Plus has put together a stunning animation that reminds us once again of how miraculous Romain Grosjean's survival truly was last year in Bahrain.

The former Haas driver escaped the well documented fiery crash on the first lap of the Sakhir Grand Prix with just minor burns to his hands, an extraordinary - and inexplicable - outcome given the sheer violence of the crash and the Frenchman's tenuous chances of extricating himself from the mangled wreck and consecutive inferno.

In a 30-minute documentary broadcasted on its Sport Reporter program, Canal Plus revisited the incident, piecing together the unfortunate sequence of events using onboard footage but also an amazing animation that details Grosjean's impact with the barrier and how the motion followed by the Haas' survivor cell thereafter.

In the short film, Grosjean confides his thoughts on the crash, admitting that he had given up at one point on his hopes of surviving before fighting his way out of the blaze, while his wife Marion conveys the emotions that swirled in her mind as she witnessed the agonizing moment live on TV from home.

Have collected the animation clips into one video here (footage was placed amongst interview footage in the documentary).

But the film also highlights the ordeal endured by Haas team members as they awaited news on their driver.

"When the race actually started, I was watching both of our guys onboard," recalled Grosjean's race engineer Ayao Komatsu.

"Initially I didn't think it was Romain, and then I saw on the GPS - 'GRO Stopped'".

Haas engineer Dominic Haines also remembered the excruciating long moment that elapsed until the team received confirmation that its driver had not only survived the crash but was out of harm's way.

"In the first lap of the race, one of the key things that we look at is just making sure that the data from the car is coming back okay," Haines explained.

"So we're really focusing on the telemetry data that is streaming. And all of a sudden the data stops, and it stops and he's going 200 km/h, and then it just cuts out.

"I immediately go on the radio and say 'Are you okay?'. But the worse thing to hear is silence. There was a good 30 seconds where I was just, yeah… awful just an awful sensation.

"Somebody saw on another feed, 'He's walking, he's walking', and I heard that come in my ear and then you know, okay, he's out of the car, he's okay but until then it was just horrible, a horrible day." 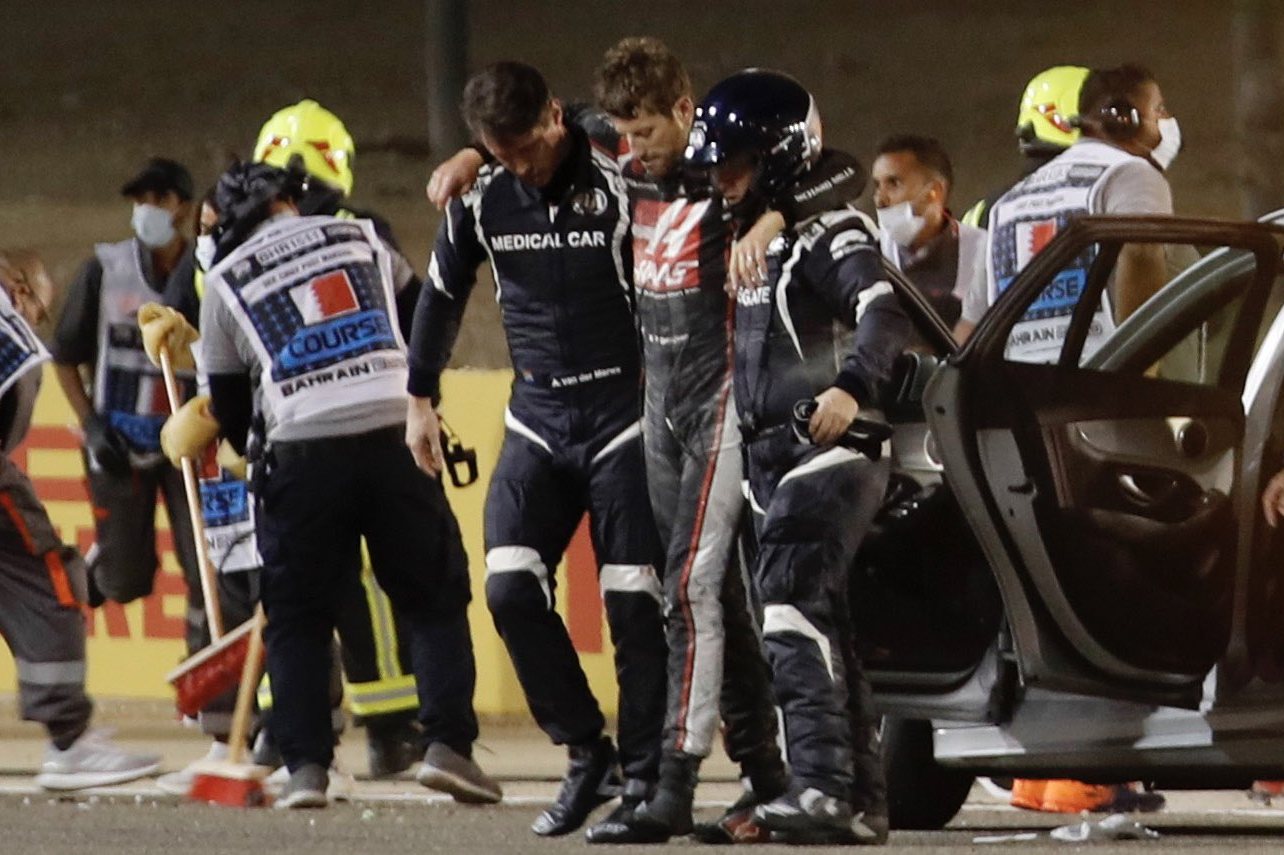 Finally, while Grosjean acknowledged the incredible luck that spared him a terrible fate, the Frenchman underscored the crucial role played by the Halo in his accident and paid tribute to the young man whose tragic death led to the introduction of the mandatory cockpit safety device.

"Jules Bianchi saved my life thanks to the Halo," said Grosjean. "Yet I was firmly against its introduction. What an idiot I was…"

"Jules saved my life, he saved the life of other drivers. I will forever be grateful to him."