McLaren driver Lando Norris is one of the top motorsports stars set to take part in a $25,000 Twitch Rivals charity tournament in Minecraft this week.

Norris is hosting the competition and will be one of four team captains taking part. He will be joined by Red Bull reserve and test driver Alex Albon, as well as by former Renault junior Max Fewtrell, with more to be announced.

The competition will get underway at 6pm GMT on Wednesday March 3 and will last for the rest of the day. Norris will be playing to raise funds for mental health charity Mind, which has partnered with McLaren since the start of 2020.

That will be followed by ‘Boat Racing’ where teams compete on a closed circuit ice track, watching out for the perilous ice blocks to avoid sinking their boat. After that comes ‘Bow Wash’ which is described as "a test of balance, timing and precision where the teams must fire arrows at their rivals from aerial platforms."

The best-of-five final will see the top two teams thrown into a world full of disintegrating floors over deadly void below. All the stages will include racing and PVP (player-versus-player) modes.

Norris was one of the F1 stars who helped boost the profile of online gaming during last year's initial coronavirus lockdown. As well as racing sims, he's also a big fan of Call of Duty battle royale Warzone.

He and Albon, along with Max Verstappen and George Russell, have long been avid gamers. Ferrari's Charles Leclerc also got bitten by the Esports bug in 2020 and was among those taking part in the FIA's official Virtual Grand Prix series. 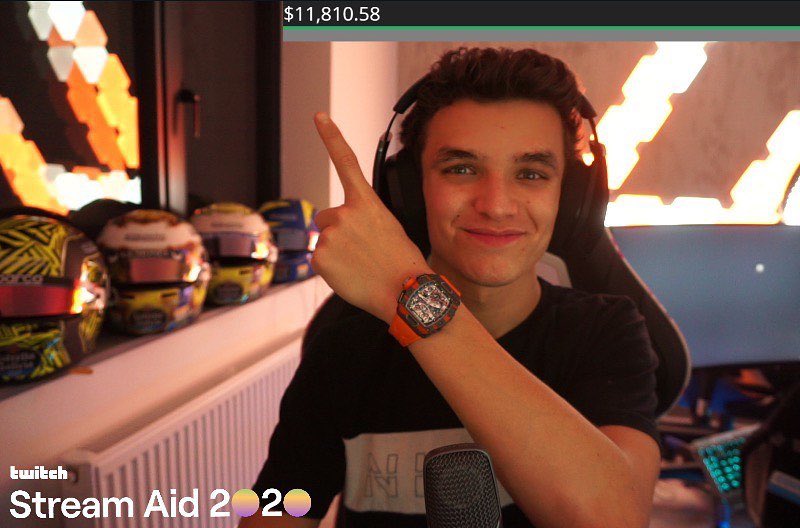 Norris recently launched his own Esports organisation named Quadrant, but with a full season of real world racing in prospect he's been cutting down on virtual competitions in recent months.

“I asked Max Verstappen during the briefing of the Abu Dhabi Grand Prix if he expects to race a lot on the sim this winter," Norris told acingNews365.

"For me that's not the case as I will be spending a lot of time with my family,” he continued. “I don’t have a sim with my parents and therefore I don’t expect that I will do much sim racing."

Instead, Norris said that he hoped to use some of his spare time working on helmet designs in association with Bell which manufactures his racing lids.

"I expect Bell to send me a few more helmets," he commented. "I like to make helmet designs so it’s nice that Bell sends me some helmets.”

Norris and former team mate Carlos Sainz sported stunning replica helmets back at the 2020 Eifel Grand Prix which were based on designs they had worn earlier in the season at Silverstone, all for the benefit of Mind.

With Sainz now having moved to Ferrari, Norris will be joined by new team mate Daniel Ricciardo for the 2021 season.