Anthony Davidson says the proposed ‘halo’ concept aimed at improving driver head protection is “not ideal” as it impairs vision, but the former F1 driver thinks it is the “best compromise” at the moment.

In the wake of Jules Bianchi and Justin Wilson’s deaths, the FIA has been ramping up testing and investigations to prevent further head injuries.

Among the different solutions sampled, the Grand Prix Drivers’ Association (GPDA) recently declared itself in favour of the ‘halo’ design: an oval-shaped structure that surrounds the driver’s head but needs the support of a vertical strut (see illustration below). It was Mercedes that had initially brought forward such layout. 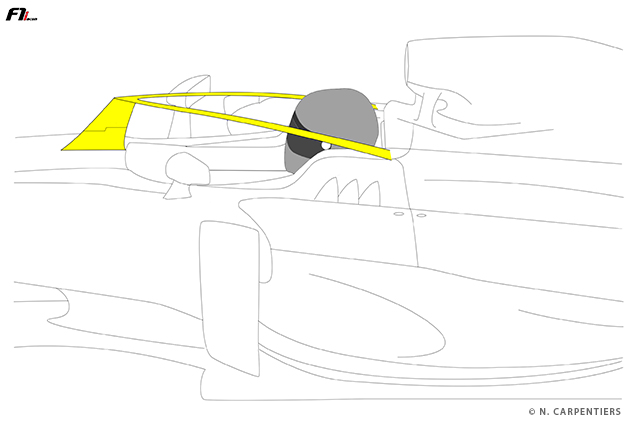 Davidson, who is accustomed to racing with a closed cockpit in the World Endurance Championship, was able to test the ‘halo’ system on the world champions’ simulator and admits

“Side vision doesn’t seem to be too different at all compared to what the drivers would be used to, but the version that I tried had a central fin or post,” the former Minardi, BAR, and Super Aguri racer told NBCSN TV journalist Will Buxton in a wide-ranging interview.

“I think a lot of the teams have been working on that in conjunction with the FIA to come up with the best solution. It’s not ideal. It really is not an ideal solution and it’s never going to be.

“The more you try and increase protection for the safety of drivers, the flipside is you suffer with visibility and the central post is, honestly, like a big aerial sticking up in many ways which the drivers already have to deal with.

“I’d say it’s quite a big distraction, but I only drove it for a couple of laps and that was on a simulator and not in the real world. It might be easier in the real world. Visibility is quite difficult at the best of times in a simulator compared to reality. Hopefully it’s not as difficult when they start running them in anger. But it’s never going to be as good as not having one for visibility.”

Despite his reservations about the halo concept, Davidson is confident the system can be further improved to minimise the associated visual disturbance.

“I’ve really thought long and hard about it, and I think it is the best solution for now. I don’t think full closed canopies in Formula One are necessarily the right way. If you had a wheel hit a sportscar canopy, I don’t know if it would bounce off or come through. I’ve seen them break in the past. I don’t think that a full canopy necessarily gives you full protection.

“Things might have moved on since I last had a go. I’m sure a lot more work has been done. Maybe they can make the central pillar thinner, and the thinner you go obviously it might be weaker in a side impact but every step you can go in terms of thinness will help the driver see more clearly.

“Through lots of thought you come to a conclusion that there is no easy solution. But for now, this seems to be the best compromise.”