Red Bull's Max Verstappen was once again in charge of proceedings in second practice for the Styrian Grand Prix in Spielberg, Austria.

Verstappen's best time of 1:05.412s was a third of a second quicker than McLaren's Daniel Ricciardo, with Esteban Ocon third fastest for Alpin ahead of Mercedes' Lewis Hamilton.

There were brief spins during the session for Carlos Sainz, Nicholas Latifi and Nikita Mazepin, along with a curious incident in pit lane for Valtteri Bottas. Pierre Gasly was unable to take part in the session due to a power unit change taking place.

Rain was heading toward the Red Bull Ring, but it was still sunny as the teams prepared for the second hour of practice on Friday afternoon, with the notable exception of Pierre Gasly as the AlphaTauri crew got started with a precautionary power unit change after the Frenchman had come second in FP1.

When the track reopened for business after lunch, Kimi Raikkonen was at the head of the field as he sought to make up for lost time having sat out first practice in favour of Alfa Romeo reserve driver Robert Kubica. He was not along for long, and within minutes everyone bar Valtteri Bottas had come out to play. Fernando Alonso set the early pace with a time of 1:06.984s on mediums, but Max Verstappen soon shaved a quarter of a second off that on the hard compound.

Alonso improved to the top again, but by now the drivers were commenting on spots of rain falling in parts of the circuit, with Yuki Tsunoda commenting that the conditions were "tricky". That didn't stop Lewis Hamilton going top with a time of 1:06.358s, the Mercedes now 0.285s quicker than the latest effort from verstappen followed by Alonso, Lando Norris, Charles Leclerc, Daniel Ricciardo Esteban Ocon, Sebastian Vettel, Antonio Giovinazzi and Carlos Sainz, who strayed wide into the kerb and went for a spin at turn 4 that sent him through the travel. 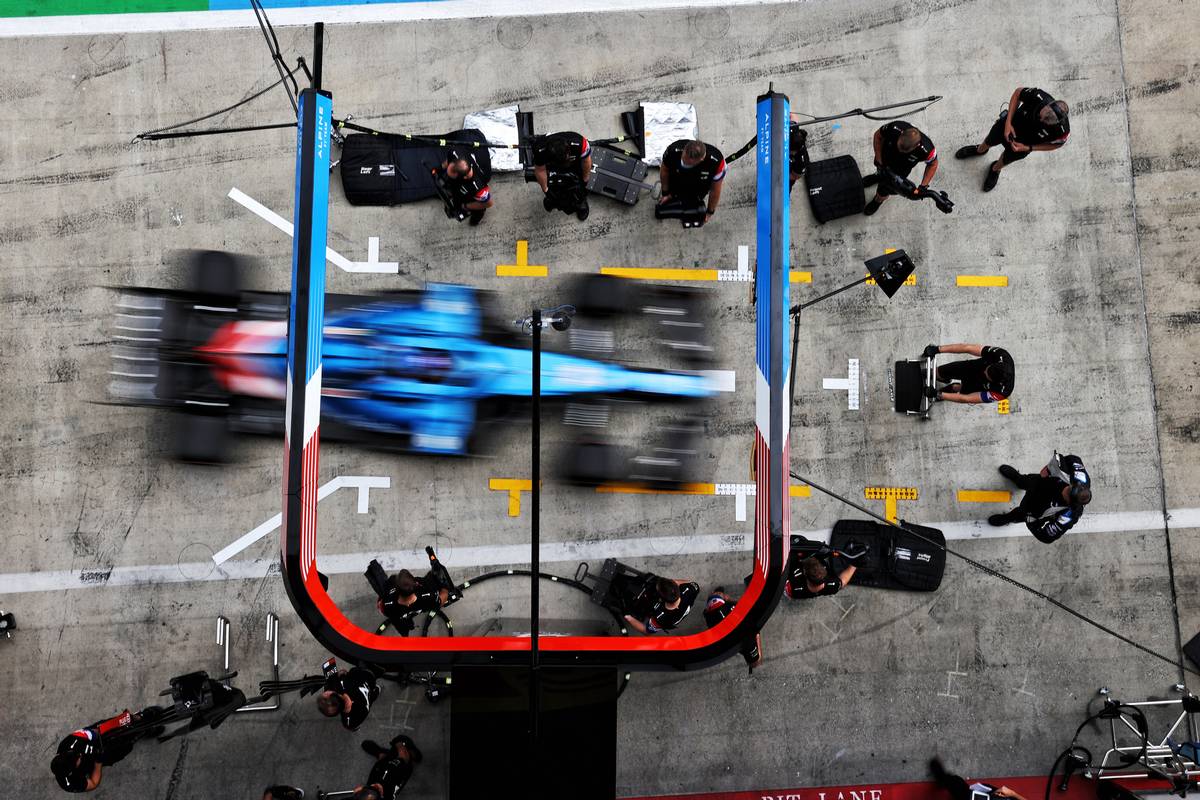 The light rain quickly eased, allowing improved laps for Verstappen (going top with a time of 1:06.192s) and Bottas who was finally at work on the sort rubber and straight into second place six hundredths slower than the Red Bull. Sergio Perez had worked his way up to fourth ahead of Ricciardo's latest that had eased him ahead of Norris and Leclerc, while Tsunoda had worked his way into the top ten in ninth ahead of Ocon.

Preliminary work done, attention turned to qualifying simulations: Aston Martin made a move to the softs which allowed Vettel and his team mate Lance Stroll to go top. Hamilton then pipped them both with a time of 1:05.796s but this was promptly bettered by Ocon by six thousandths, while Norris split the Astons to go fourth quickest. There were more spins, with Nicholas Latifi in the gravel at turn 6 and Nikita Mazepin off at turn 4, but both were able to get back underway and return to pit lane with minimal delay.

The move to soft tyres enabled Verstappen push on to 1:05.412s at the halfway mark, with Ricciardo up to second from Ocon, Hamilton, Alonso, Vettel, Norris, Stroll, Perez and Giovinazzi just pushing Sainz out of the top ten. Hamilton's bid to go top was initially successful but was then deleted for exceeding track limits - as was his cool-down lap time.

After that it was back to longer race distance simulations meaning that the timesheets remained broadly unchanged. Having been late to the part, Bottas had continued to go his own way by running the same set of soft tyres than he'd started the session for the first 40 minutes. When he did finally pit for a set of the hard compound, the Mercedes snapped ninety degrees as Bottas lit up his tyres when he sought to exit and ended up having to be pushed back into position by the McLaren pit crew, a risky incident that the race stewards marked for later review.