Lewis Hamilton reignited his world championship campaign with victory in his home British Grand Prix, collecting his 99th career win with a late pass on Ferrari's Charles Leclerc at Silverstone.

Earlier Hamilton had dramatically clashed with his Red Bull rival Max Verstappen on the first lap, with Verstappen sent spinning off into the gravel at Copse, winded but unhurt, triggering a lengthy red flag for barrier repairs.

Hamilton had to overcome a ten second penalty for causing the collision to hunt down Leclerc for victory, with Valtteri Bottas picking up the final podium place ahead of McLaren pair Lando Norris and Daniel Ricciardo. 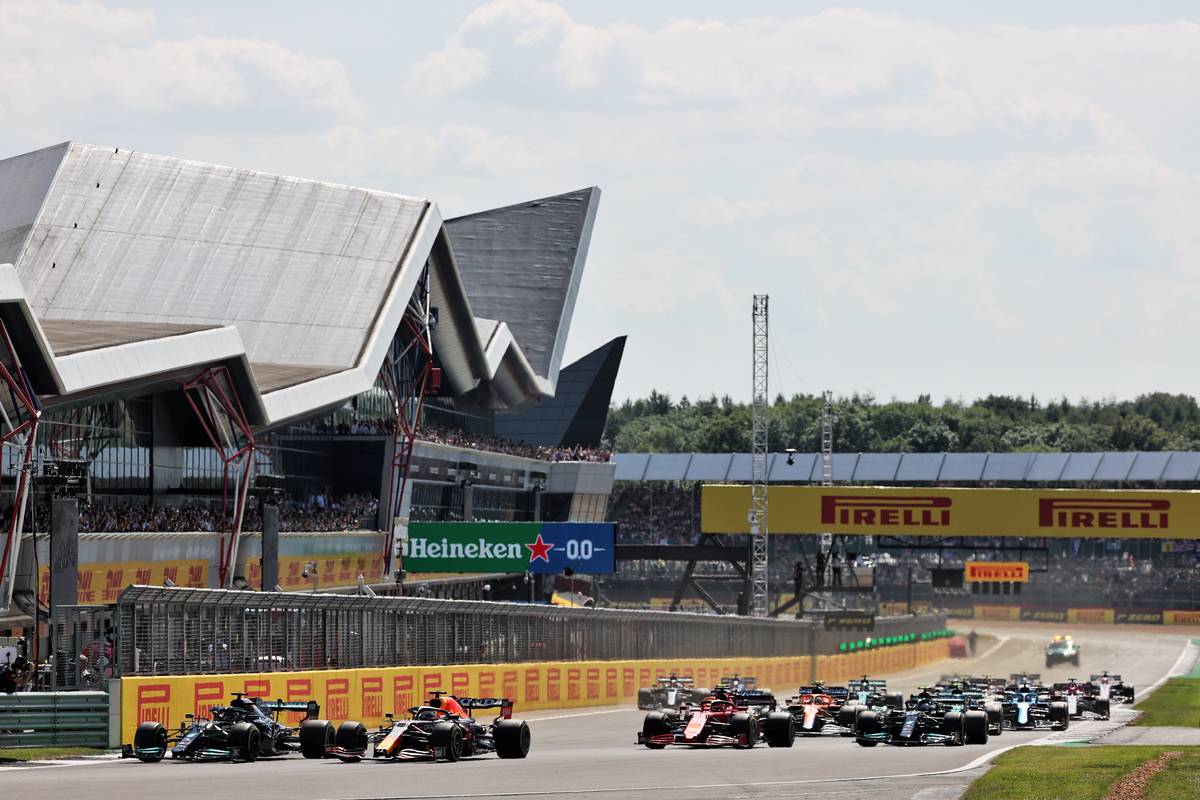 Scorching sunshine greeted the drivers on Sunday afternoon as they headed to the grid for the start of the British Grand Prix - at least, the 19 that had survived the challenge of the inaugural sprint qualifying race the previous day. Sadly, Sergio Perez was not among them after Red Bull's overnight repairs to the car breached parc ferme conditions and forced him to start from pit lane. He would also be the only driver starting on the hard compound, everyone else having gone for the medium tyres.

Meanwhile Perez' team mate was starting from the front, Max Verstappen having wrested pole position from Lewis Hamilton during the sprint race and now hoping to establish the same upper hand again when the lights went out for the main event. In fact it was Hamilton starting on what had had proved to be the 'quicker' side of the grid this weekend who duly got the better launch, sending the pair into the opening corners wheel-to-wheel.

Neither driver was inclined to give an inch - Hamilton kept attacking, Verstappen robustly defending - and contact was inevitable heading into Copse. The front left of the Mercedes clipped the right rear of the Red Bull and Verstappen was sent spinning off through the gravel and into a heavy impact with the tyre wall. It triggered an instant safety car which quickly metastasized into a full red stoppage, as a winded Verstappen headed to the medical centre for a full check-up while the marshals cleared away the extensively damaged RB16B and started their work repairing the barrier. 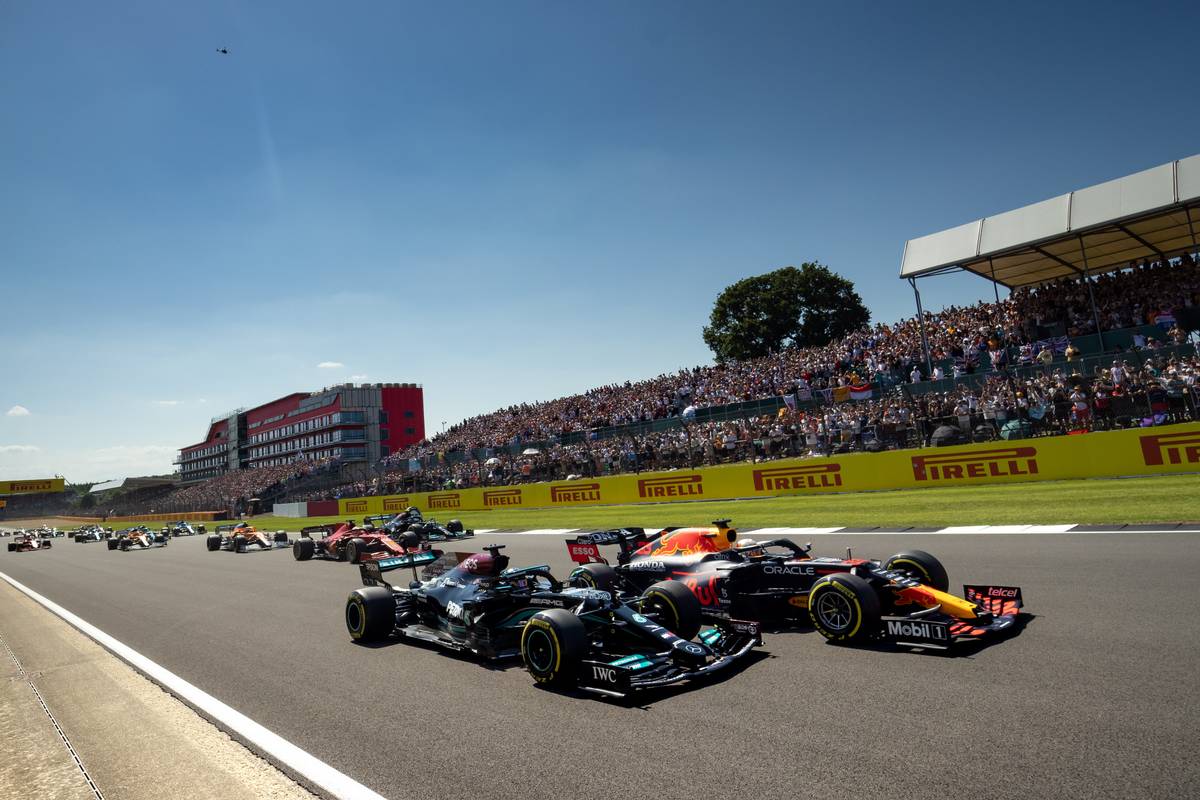 The race stewards were kept busy reviewing the incident, and there was a sense of inevitability to their pronouncement of a sanction for Hamilton. The surprise was that it was relatively lenient, a mere ten second time penalty that would have doubtless been greeted with fury at the Red Bull garage who had appeared to be advocating for nothing less than outright disqualification.

The big winner of all the first lap mayhem was Charles Leclerc, the Ferrari having jumped Valtteri Bottas at the start and then been in perfect position to blast past Hamilton in the aftermath of the first lap incident before the race was suspended. Further back, McLaren's Lando Norris and Daniel Ricciardo were now in fourth and fifth ahead of Aston Martin's Sebastian Vettel who had got the jump on Fernando Alonso, while Carlos Sainz was up to eighth ahead of a flying Kimi Raikkonen who had gained four places to put the Alfa Romeo ahead of Esteban Ocon in the second Alpine.

After a delay lasting almost 40 minutes it was time to get the race back underway with a second standing start, the leaders having taken on fresh medium tyres and Hamilton now kitted out with a replacement front wing. Leclerc got a solid start and held the lead, quickly pulling away out of DRS range from Hamilton, who was understandably disinclined to push things too hard again this early in the race after his previous experience. Meanwhile Norris got the better of Bottas for third as Vettel spun out at the exit of Luffield while fighting with Alonso; he rejoined at the back of the field, but subsequently retired due to damage. 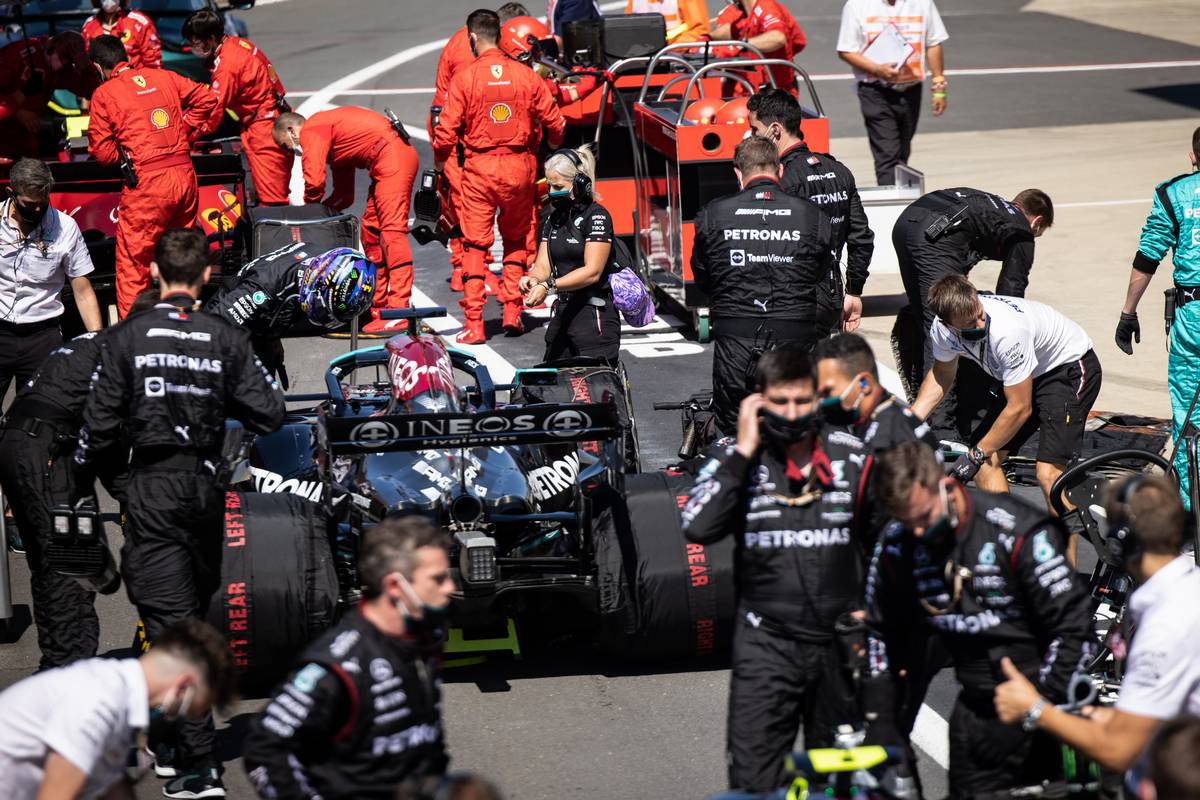 After the dramatic start, the race settled down as teams waited to see how the medium tyres would fare in the blisteringly hot conditions, and how it would affect the pit stop strategies with Mercedes having to factor in Hamilton's ten second penalty. The world champion was briefly back in DRS range of the leader after Leclerc lost time scrolling through steering wheel menus to address an engine mapping issue on the Ferrari, but he was unable to do anything with the momentary opportunity and Leclerc was soon pulling away again.

Norris was the first of the leaders to make a scheduled pit stop on lap 22, but there was a delay to the left rear tyre change. Mercedes reacted immediately and brought Bottas in next time, a slick stop successfully putting the Finn back out just ahead of the McLaren. Hamilton was the next of the front runners to come in on lap 28, the ten second penalty inevitably dropping him behind Norris. Ferrari opted to bring in Sainz next time around for a stop blighted by an issue with the front left wheel gun. That put extra pressure on the pit crew when Leclerc came in from the lead next time by. Fortunately this time it was a flawless performance and the Monegasque returned to the track with an eight second lead over Bottas and Norris.

With 20 laps to go and everyone having pitted, Hamilton breezed down the inside of Norris down the old main straight to pick up third place and set his sights on catching Bottas. Ricciardo was still in fifth ahead of Sainz and Alonso, with Lance Stroll doing a solid job for Aston Martin in eighth ahead of Perez, who after his original pit lane start was now flying the Red Bull standard. Unable to find a way past Stroll, Perez opted for a second pit stop on lap 39 for a fresh set of mediums - but it came at the cost of seven positions and dropped him out of the points again. 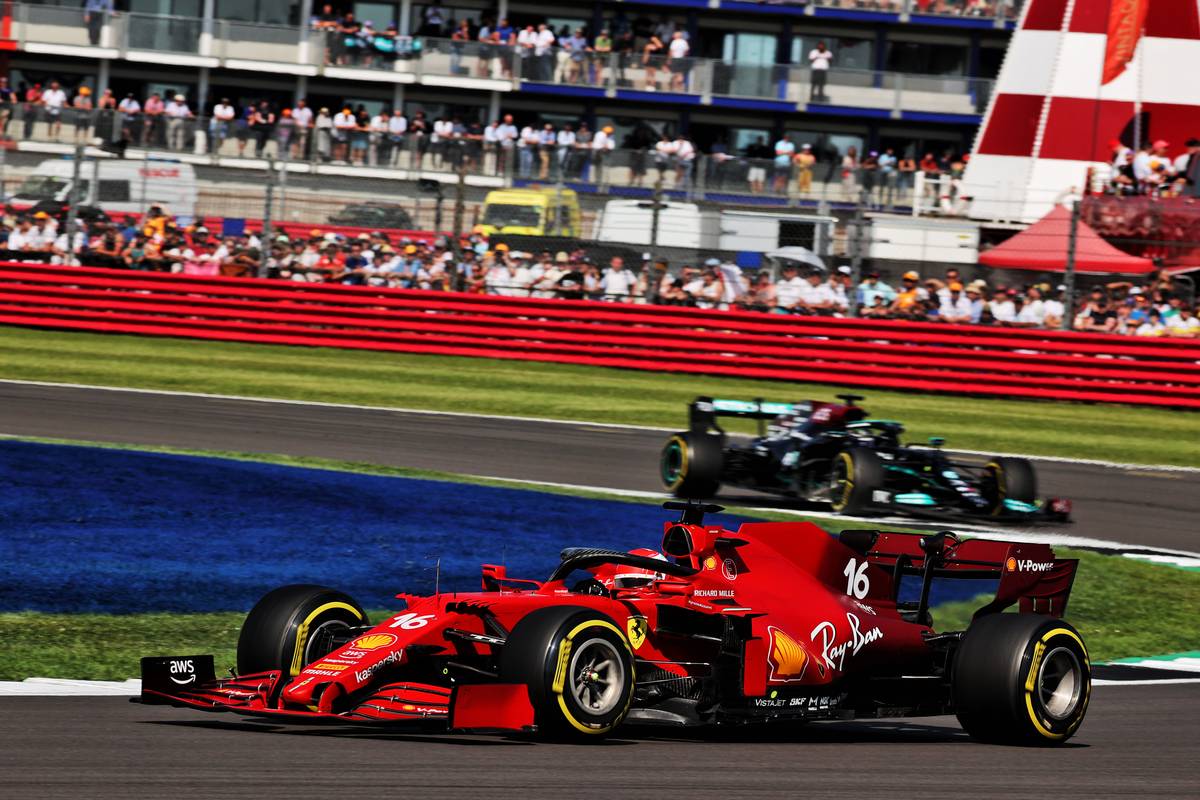 Having closed up on Bottas, Hamilton was given a free pass on the Finn when the Mercedes pit wall decreed a team order to invert positions. Hamilton immediately started eating into Leclerc's lead with the team telling him he was on course to catch the Ferrari before the finish: passing once he got there being quite another matter, of course. With five laps to go the gap was under two seconds, and next time by Hamilton was within DRS range, but the Mercedes was beginning to lose momentum as the tyres degraded.

With a sense of poetic symmetry, it all came down to the same part of the circuit at Copse where Hamilton had previously clashed with Verstappen. This time it was Leclerc who blinked, missing the apex and slipping onto the outside kerb which handed the lead - and victory - to Hamilton, moving him within eight points of Verstappen in the drivers championship. Bottas secured third place ahead of Norris and Ricciardo, with Sainz holding on to sixth place ahead of Alonso, Stroll, Ocon and Yuki Tsunoda.

A late switch to soft tyres left Gasly just outside the points, with George Russell finishing in 12th ahead of Antonio Giovinazzi and Nicholas Latifi. A late spin left Raikkonen in 15th just ahead of Perez, with Nikita Mazepin and Mick Schumacher the final cars crossing the line.