Gasly qualified P6 on Friday and sought to take advantage of Lewis Hamilton's slow start in Saturday's sprint race to move up the order.

But last year's Italian Grand Prix winner, as he negotiated the first chicane, slightly misjudged his gap to McLaren's Daniel Ricciardo, hitting the back of the Aussie's car and damaging his front wing.

However, the wing failed as Gasly entered Curva Grande and lodged itself under the AlphaTauri which in turn sent the AT02 into the gravel trap and in the barriers.

Gasly was expected to line up at the back of the grid following the mishap, but the Italian outfit has taken advantage of the circumstances to fit the Frenchman's car with a fresh engine.

The change by itself would have yielded an inconsequential grid penalty, but the introduction of a different specification energy store imposes a pitlane start.

Gasly's teammate, Yuki Tsunoda, will launch his maiden Italian Grand Prix from fifteenth on the grid.

Monza Speed Trap: Who is the fastest of them all? 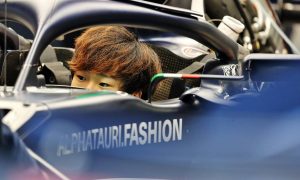