Daniel Ricciardo picked up his first F1 victory for McLaren, with team mate Lando Norris making it a 1-2 for the squad for the first time in 11 years and their first win since 2012.

The pair finished ahead of Mercedes driver Valtteri Bottas, who had managed to fight his way back from a pit lane start, with Ferrari's Charles Leclerc next after a post-race time penalty was applied to Red Bull's Sergio Perez.

However the most dramatic moment of the race came on lap 26 when Max Verstappen and Lewis Hamilton crashed out of the race after making contact when Hamilton came out of pit lane side-by-side with Verstappen.

With neither driver willing to give an inch into turn 2, a collision was inevitable and both cars went into the gravel with the Red Bull's rear wheel coming to rest on the front nose of the Mercedes. 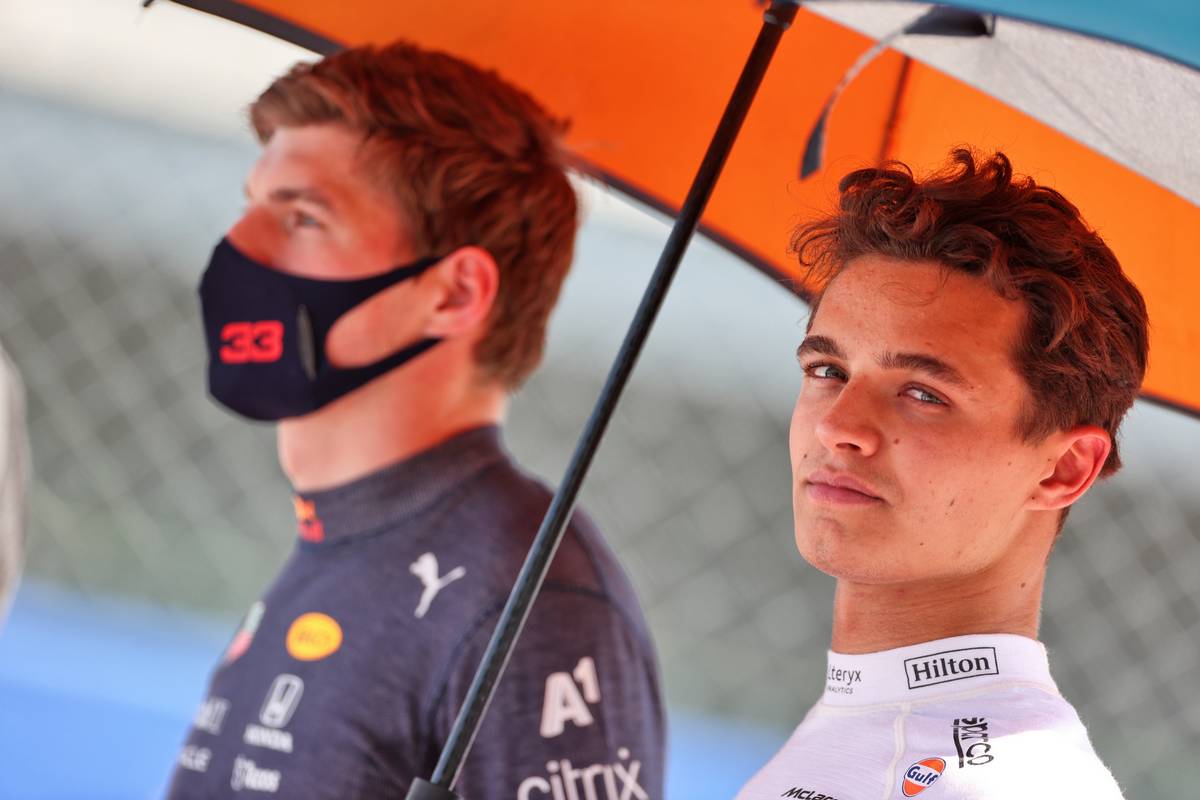 After formal qualifying on Friday followed by the sprint qualifying race on Saturday, it was finally time to get the Italian Grand Prix itself underway on a warm, sunny Sunday afternoon at the Autodromo Nazionale Monza.

Red Bull's Max Verstappen was starting from pole ahead of McLaren duo Daniel Ricciardo and Lando Norris, a poor sprint having consigned Lewis Hamilton to fourth. His Mercedes team mate Valtteri Bottas was not among the 18 cars lining up on the grid after engine component changes left him starting from pit lane. He was due to be joined there by Pierre Gasly after the AlphaTauri having crashed out of the sprint, but Gasly then reported a sticking throttle which forced him out. It was a sad end to the day for the 2020 race winner, compounded by his team mate Yuki Tsunoda suffering a mechanical issue on his out-lap and which meant he also had to be pushed back into the garage.

That left 17 cars on the grid and Bottas at pit exit ready to get the race started when the lights went out. With a free choice of tyres, virtually everyone was on the medium compound with the surprising exception of Hamilton who had elected to start on the hard tyres, a choice described as "weird' by Ferrari's Charles Leclerc who was starting from fifth.

Despite a solid start for Verstappen, Ricciardo got the jump on his former team mate and leapt into the lead, leaving the Dutch driver battling to stay ahead of Hamilton who had escaped an early challenge from Leclerc to pass Norris and run wheel-to-wheel with Verstappen into the chicane. The two made minor contact, and Hamilton's attempt to sweep around the outside and briefly onto the grass cost him time, dropping him back behind Norris to where he'd started in fourth. Meanwhile Antonio Giovinazzi had run wide and swept across as he came back on the track, making contact with Carlos Sainz. The Alfa Romeo was sent spinning which triggered a virtual safety car as Giovinazzi recovered to pit lane leaving a trail of debris on the track for the marshals to clear up.

The race resumed with Ricciardo retaining the lead from Verstappen and Norris, and Hamilton still ahead of Leclerc and Sainz. That left Sergio Perez in seventh in the second Red Bull followed by Lance Stroll and Alpine pair Fernando Alonso and Esteban Ocon, leaving Williams' Nicholas Latifi just outside the points in 11th. Giovinazzi had rejoined the race at the back albeit now also with a five second penalty for his clash with Sainz.

Verstappen was reporting that he wasn't able to make a move on Ricciardo, but further back Latifi was able to jump Ocon for tenth and Perez made a bold move on Sainz by going wheel-to-wheel through the first chicane and then completing the move through the second. Lap 12 saw Norris run wide the final corner, giving Hamilton half a chance to pull off a DRS pass into turn 1. The world champion was unable to make it stick, although the defence was taking its toll on Norris' tyres. Meanwhile Hamilton's team mate Bottas was on the march from the back, soon passing Ocon and Latifi on lap 14 to move into the top ten after his pit lane start. Vettel also attempted to go side-by-side with Ocon only to have the door slammed shut on him by the young French driver. The incident earned an immediate review from the race stewards, resulting in a five second penalty for Ocon.

After 18 laps, both Ricciardo and Verstappen were complaining of rear tyre wear but they were still five seconds ahead of Norris who was holding up Hamilton's progress and allowing Leclerc to stay in touch in fifth, albeit with half an eye on the rear view mirror for Perez' approach. Although he was now up to ninth place behind Sainz and Stroll, Bottas remained almost half a minute off the race leaders.

With the race approaching half distance, the timing of the pit stop was becoming critical with Verstappen's lack of grip sending him straight over the first chicane. However it was actually Ricciardo who pitted first on lap 23, emerging back on track just ahead of Bottas, while Verstappen was left in control of the race and putting his foot down for a fast lap as much as the tyres would allow. The Red Bull was in next time by, but the team's normally superslick pit operation went horribly awry and he was left stationary for over 11s because of a sticking tyre. At the same moment Hamilton ambushed Norris through Curva Grande for what was now the race lead, an absolute disaster for Red Bull and for Verstappen. 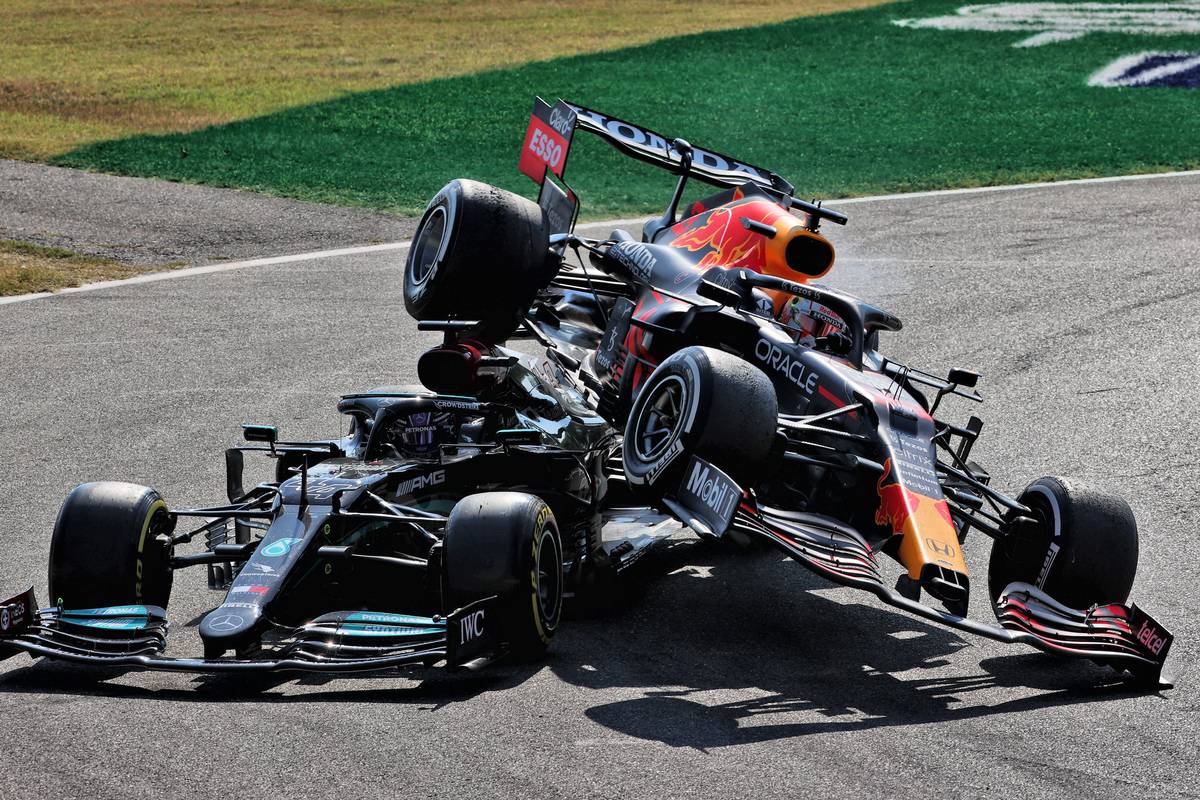 After Ricciardo and Verstappen's stops, Hamilton responded on lap 26. His pit stop was also slower than optimal meaning, that he came back out on track right alongside Verstappen at pit exit. Neither man was willing to give an inch going through turn 2, and a violent contact was inevitable. The Red Bull ran right over the top of the Mercedes and came to rest on the other car's nose, with the Halo cockpit protection proving vital in protecting Hamilton's head from a potentially fatal impact from the Red Bull's tyre. A safety car was deployed even as Hamilton tried frantically to reverse his way out of the accident, but to no avail. The race stewards confirmed that the clash would be investigated after the finish.

Anyone who hadn't already stopped - such as Leclerc, Perez and George Russell - now dived down pit lane to take advantage of the situation. Ricciardo was back into the lead ahead of Leclerc followed by Norris and Perez while Carlos Sainz found himself in fifth ahead of Bottas, with the remainder of the top ten taken up by Stroll, Alonso, Russell and Latifi. The restart saw Ricciardo blast away to safety leaving Leclerc and Norris scrapping over second: despite being squeezed by the Ferrari, Norris held his nerve and was duly rewarded with second place. An unsettled Leclerc then lost out to Perez but the Mexican had gone off track in the process, meaning that he should have immediately handed the place back as a precaution. But he didn't, and Leclerc was now locked in mortal combat with Bottas over fourth place with the Mercedes finally completing the pass at the first chicane on lap 34. That meant Perez no longer had the option to hand the place back to Leclerc, and a five second penalty from the race stewards duly followed.

Ricciardo's lead was now down to half a second, and Norris was on the McLaren team radio asking if the Aussie could pick up the pace - perhaps a subtle appeal for team orders to put him into the lead, but the team told him that a team 1-2 was the priority and Norris took the hint and complied. However his plea had not been without merit, as Perez and Bottas were both closing fast. Ricciardo was eventually able to respond and started to pull away, easing the pressure on Norris from the penalised Perez and the impatient Bottas. No one was proving able to pull out a significant gap, and with 15 laps remaining in the race the top ten were covered by just 11 seconds in a DRS-assisted parade.

Despite the Red Bull's time penalty, Bottas was still trying his best to legitimately take the position on track when there was a virtual safety car on lap 44 for Nikita Mazepin's Haas grinding to a halt just after the Ascari chicane. The Russian had earlier picked up a five second penalty for tipping his team mate Mick Schumacher into a spin at turn 4 on lap 33. 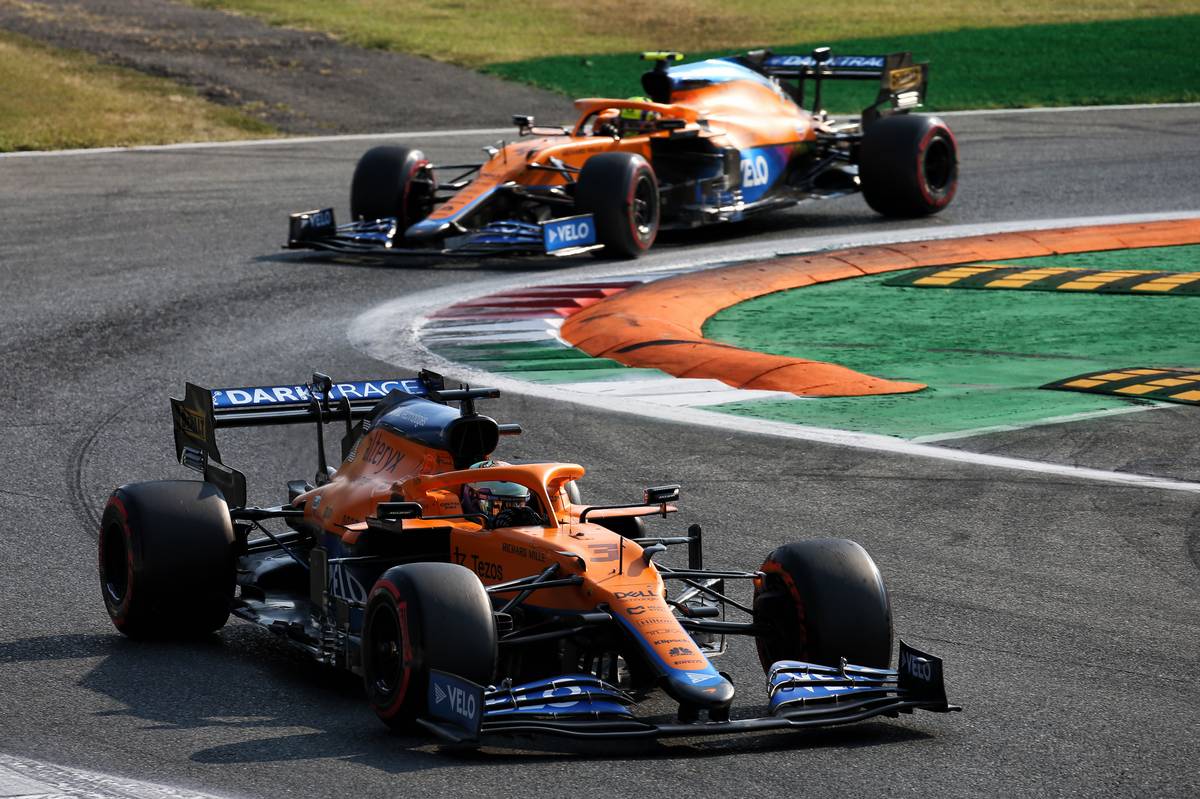 It was only a brief VSC interruption and the race was soon back up to full speed. Ricciardo and Norris were now firmly in control and flying in formation in first and second, while Bottas continued his assault on Perez for third even though the position would undoubtedly be his once the time penalty was applied to Perez, which would drop the Red Bull behind Leclerc.

Sainz, Stroll, Alonso and Russell continued to run in place to the finish, while Ocon had managed to get back into the points with a pass on Latifi. The Canadian eventually crossed the line just outside the top ten followed by Vettel and the two Alfa Romeos of Giovinazzi and Robert Kubica, with Schumacher the last car to make it across the line.