When Daniel Ricciardo announced that he would be leaving Renault and joining McLaren in 2021, many fans wondered whether this would consign the young Briton to number two status at the team.

But the first half of the season saw Norris emphatically in charge, as Ricciardo struggled to adjust to such a different chassis style.

It's only been in recent outings that Ricciardo has been back to his old self, and last weekend he clinched his first Grand Prix victory since he won at Monaco in 2018 for Red Bull.

Last week at Monza, Norris was right behind Ricciardo at the line to complete the first team 1-2 since 2010, joining in whole-heartedly with the celebrations despite having missed out on the chance of a maiden victory in 52 outings.

“Daniel led from the start, we were in these positions [on merit]," Norris told the media including Motorsport Week after Sunday's race. "That’s why it’s we more than deserved it. We were there on pace, where Daniel put the car, where I put the car.

Norris said that having earned the win rather than gained from the misfortunes of others was a boost for the team moving forwards: "It gives us that confidence to go in the future.”

And he acknowledged that the win was a big step forward for Ricciardo, which meant the pressure was now on him to respond.

“In terms of what he can do on track now compared to what he could do a few months ago he’s definitely a lot closer, for sure,” he said. "It’s also good for me in a way, as much as I hate it, because you want to beat anyone in any circumstance!

"It’s only going to push me more, push the team more, help us as a team in the constructors’ as well," referring to McLaren's ongoing battle with Ferrari over fourth place in the standings.

“We’re racing Ferrari, who have got two extremely good drivers, to beat them week in week out," he said. "It’s been a tough first half of the season for us when Daniel has been struggling that little bit, but now he’s come through. 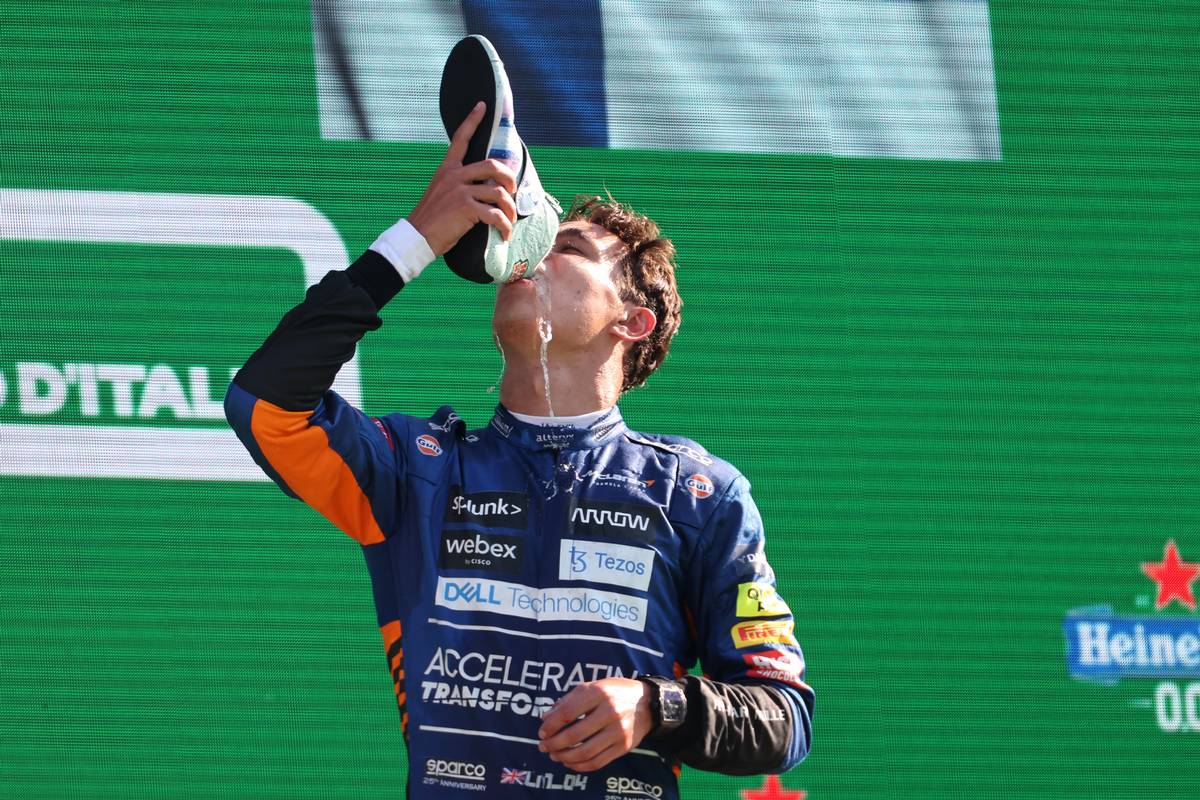 "He’s showing what he can do and what everyone knows he can do, and the reason he came to McLaren. It’s only going to be better for all of us."

As a consequence of winning the Italian Grand Prix, Ricciardo deployed the most formidable weapon in his arsenal - the dreaded 'shoey' in which he, Norris and McLaren CEO drank champagne from the Aussie's rank racing boot.

“It tasted alright,” Norris told Crash.net, while not exactly sounding keen to experience it again any time soon. “Not a big fan of that kind of drink anyway.

"When you have the addition of it coming out of a shoe, from Daniel, where his sweaty foot’s been for the last two hours!" he continued. “That’s really not something I advise for other people to try ever

"I hope I never have to do it again. But I did say – I think we said – at the beginning of the year or some time that if we were on the podium together, I would do it.

"I stood by it and was happy to do it. Zak did it as well. I think he really did love it. It was cool, a cool experience. It’s a good memory for everyone. As much as I hated it, I did enjoy it.”

Lewis Hamilton, Max Verstappen, Christian Horner, Nico Rosberg, Lance Stroll, Mark Webber, Martin Brundle and Sir Patrick are among the select few to have had a taste of the 'boot-chug' on the podium since its first appearance after the 2016 German Grand Prix.