McLaren's Lando Norris emerged victorious with his maiden Formula 1 pole position, in a dramatic finish to qualifying for the 2021 Russian Grand Prix.

The morning's torrential rain had stopped by the start of the session but the track remained too wet for slicks until the final minutes of Q3, with those brave enough to make the switch early being duly rewarded.

As well as Norris, there was success for Ferrari's Carlos Sainz who will start from second while George Russell took third place for Williams ahead of Lewis Hamilton, after a torrid finish to the session for Mercedes.

With sodden Spa barely in the rear view mirror, it was back to watching the skies again in Sochi as heavy rain caused massive disruption to the Saturday morning schedule including the cancellation of Formula 1's final scheduled practice. It now threatened further delays to qualifying in the afternoon, but for once the luck was with us and the rain stopped with half an hour before the planned start of the session. It meant that the drivers were able to head out on time to do battle on the wet but rapidly draining street circuit. 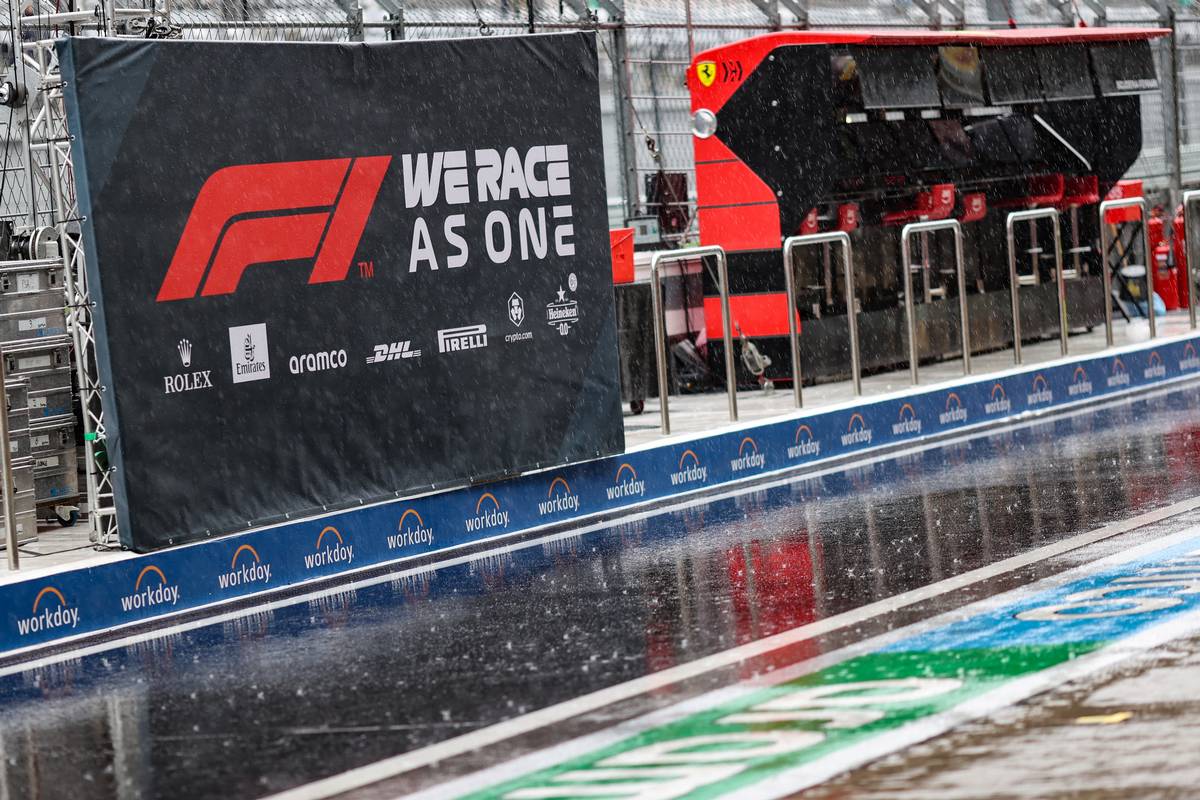 Q1: Mercedes cruise through as Verstappen sits out qualifying

With everyone wary about the possibility of the rain picking up again, there was a queue of cars on intermediates (and Alpine's Fernando Alonso a lone outlier on full wets) at pit exit waiting to head out when the lights went green.

The first target time was set by AlphaTauri's Pierre Gasly at 1:51.519s, but Ferrari's Charles Leclerc soon wiped that out by more than a second and then McLaren's Lando Norris took the benchmark down to 1:49.872s. The minute-by-minute improvement in the conditions was confirmed by Gasly's next effort which was six and half tenths faster still. Leclerc's next run was thwarted by Antonio Giovinazzi's Alfa Romeo pirouetting across the track ahead of him at turn 16, but fortunately the Italian was able to recover and return to pit lane without incurring any damage.

The two Mercedes drivers Lewis Hamilton and Valtteri Bottas then took up their post at the top to ensure that the weather wouldn't catch them out, Hamilton pulling a second clear of his team mate and the rest of the field with a time of 1:46.937s. However Nicholas Latifi then punched in the fourth quickest time so far in the Williams to show that there was still plenty of track evolution yet to come. 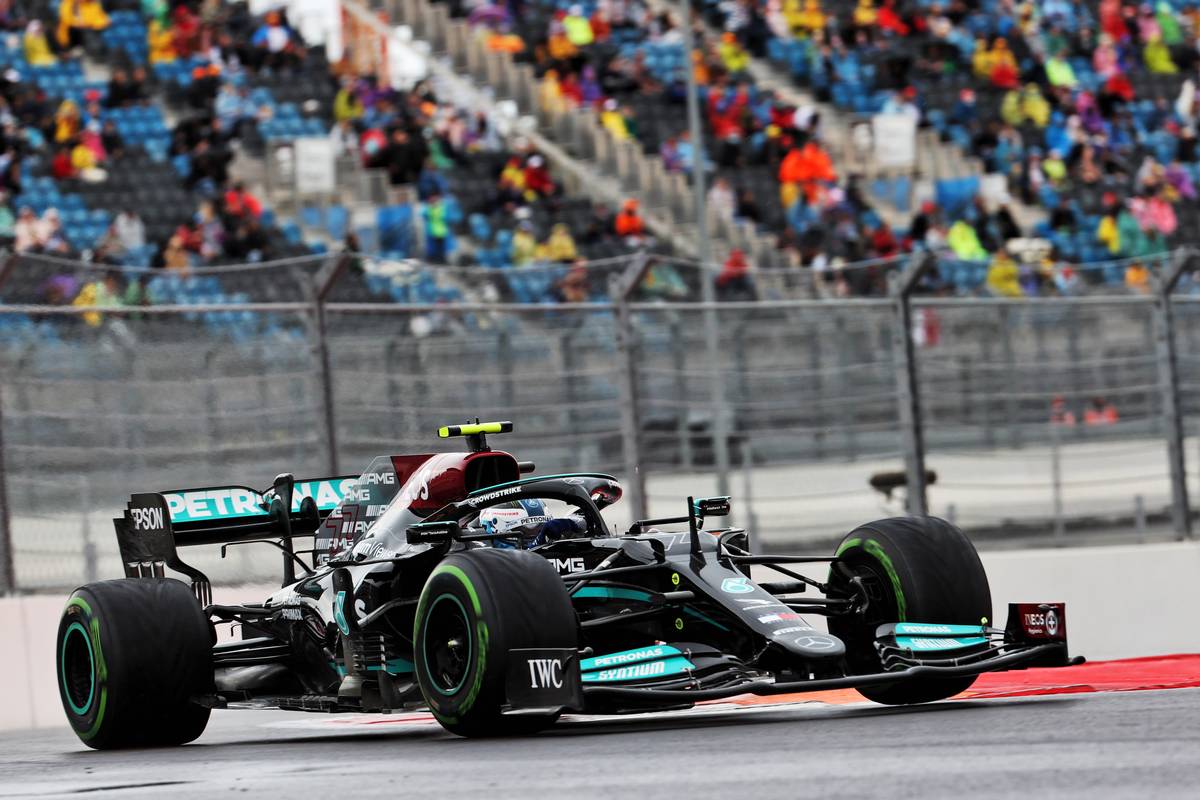 After a shaky first lap, Sergio Perez carried Red Bull's colours to the top of the timing screens with a new time of 1:46.455s. Alonso (now on inters) briefly split the two Mercedes in third before a new lap from Bottas restored the Finn to the top on 1:46.396s. With less than three minutes remaining, drivers headed to pit lane for fresh tyres for one last push to ensure they survived the cut, although they had to wait until yellow flags for Perez going wide at turn 2 ended before they could properly get down to business.

As the time ran out and the water spray settled, Hamilton snatched the top spot with a final offering of 1:45.992s - 12s slower than Friday's dry running, but a healthy four tenths quicker than Bottas who was followed by Perez, Vettel, Norris, Gasly, Alonso and Carlos Sainz. Ocon and Latifi rounded out the top ten, followed by George Russell and then Lance Stroll who had been badly baulked on his final lap by Daniel Ricciardo. The Aussie was also through in 13th ahead of Leclerc.

Yuki Tsunoda narrowly squeaked through in 15th with his final run, but those taking an early bath were Kimi Raikkonen, Mick Schumacher, Antonio Giovinazzi and Nikita Mazepin. Max Verstappen didn't even stir to set a representative time in the session given that his back row grid penalty for taking new engine components is nailed on, as it is for both Leclerc - and now also Latifi, which was announced during the session. 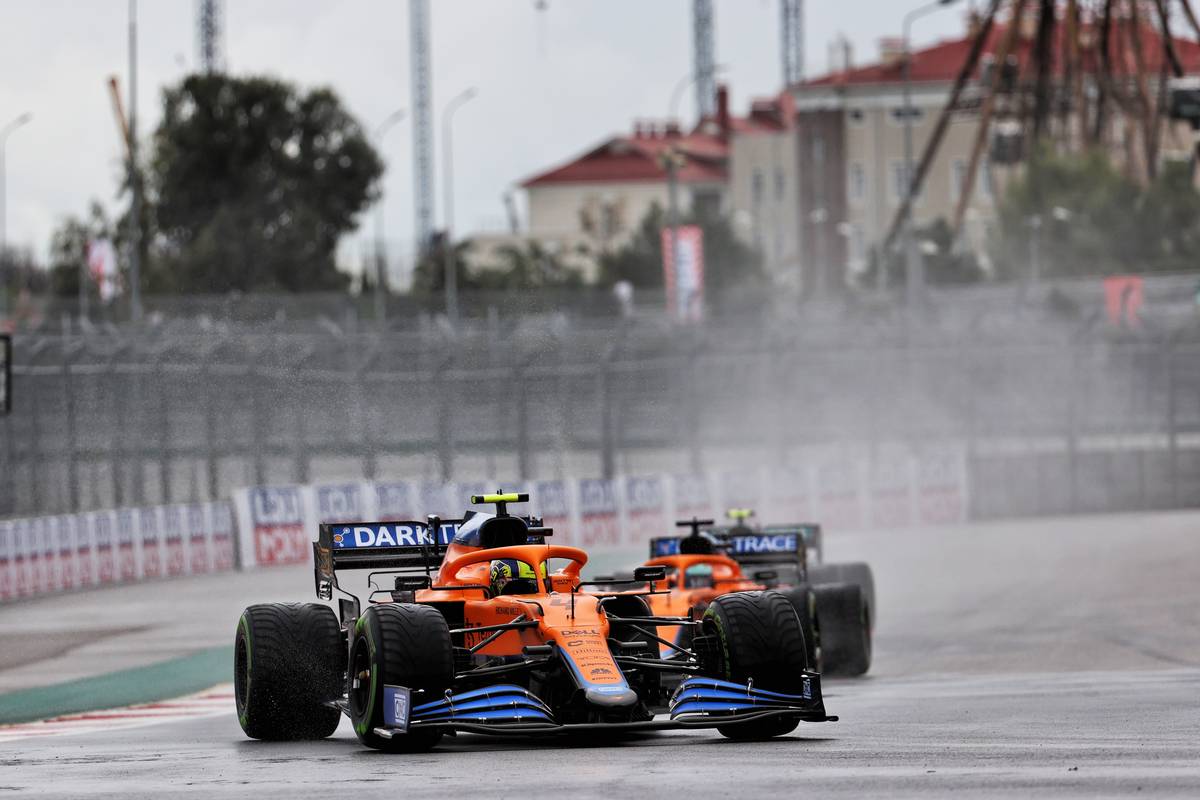 Q2: Mercedes sails on as Vettel and Gasly fail to make the cut

Drivers were once again quick to get back to work when the track reopened for the second round of qualifying, conditions currently still too wet for anything other than new intermediates despite the suggestion of a dry line beginning to form. Gasly was complaining of a lack of grip as he prepared to start his first flying lap, which nonetheless put him top for the time being with 1:46.671s ahead of Stroll, Ocon and Alonso.

Norris then went four tenths quicker and Hamilton's first run was significantly only 0.158s quicker than the McLaren. Perez was fifth fastest while Bottas bailed on his first run after going straight on at turn 2, but then went top with his second lap of 1:45.506s which was almost six tenths quicker than Hamilton who soon responded by shaving a further tenth off his team mate's time to go top again.

Norris was still hanging on to third from Alonso, Stroll, Perez, Ocon, Gasly, Vettel and Sainz, which left the elimination zone provisionally occupied by Tsunoda, Ricciardo and Russell, with Latifi and Leclerc having now called it a day in view of their back-of-the-grid penalties and not recording representative lap times in Q2.

Hamilton and Bottas both improved their times at the top as the chequered flag came out, Alonso moving up to third with his final run ahead of Norris, Perez, Ocon and Stroll. Monza race winner Ricciardo dug deep to finish safely in eighth, with Russell also leaving it late to make the cut in ninth ahead of Sainz. Vettel was annoyed ("No way! No way! Arghh!") to learn he was down in 11th and out of the session, along with Gasly (who was livd after making a mistake into turn 2 on his final lap, hitting the Halo with his fist in frustration) and Tsunoda. 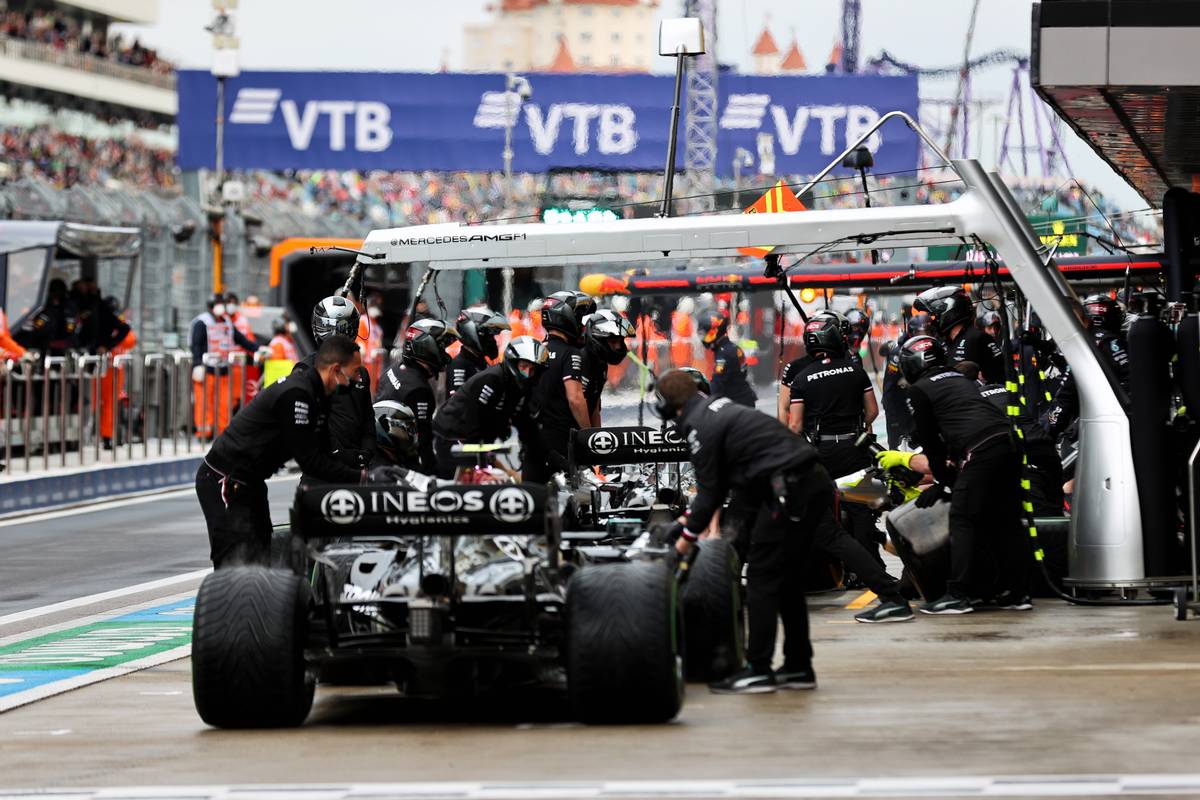 Heading into the final top ten pole shootout and with a clear dry line now developing in places, the key question was whether anyone would gamble on slicks at any point in the next 12 minutes especially as there was no imminent further rain in prospect. Hamilton for one was still playing it safe and was back out on inters for his initial banker laps, and for the time being at least the rest of the drivers dutifully fell into line.

Hamilton duly took the top spot with a time of 1:44.050s which was sixth tenths clear of Bottas, but Norris' first run enabled him to split the two Mercedes with second place, 0.004s quicker than the Finn. Alonso was provisionally fourth followed by Perez, Stroll, Ocon, Ricciardo and Sainz. However Russell aborted his first lap and dived into pit lane, becoming the first man to switch to the slick soft compound and almost careening into the pit wall with a tank-slapper as he struggled to pull away from his still-wet pit box. Seconds later Stroll and Sainz also pitted, and then Norris, Alonso and Ricciardo also took the bait.

Mercedes were the last to react: Hamilton came in for slicks shortly afterwards, but in the process he oversteered and slid into the wall on his way in, damaging his front wing. With Bottas also waiting for service behind him there was frantic activity in the pit box to get both cars back out. Now the question was whether the track conditions really had reached the crossover point to make the slick gamble pay off for anyone, with Hamilton struggling to get the tyres up to operating temperature.

Now it was a lottery as to who would be able to make the slicks work in time: Sainz snatched provisional pole but was then shoved aside by Norris, whose time of 1:41.993s was half a second quicker than the Ferrari. Russell - the man who had taken the initial gamble - was rewarded for his courage with third place ahead of Hamilton, who had been unable to improve his time after spinning at the turn 16 chicane on his final do-or-die run but whose existing time still narrowly proved good enough to keep him on the second row for Sunday's race.

Ricciardo was less than a tenth behind Hamilton in fifth followed by Alonso, with Bottas consigned to seventh ahead of Stroll, Perez and Ocon.