McLaren's Lando Norris secured his first-ever Formula 1 career pole at the climax of Saturday's qualifying for the 2021 Russian Grand Prix, and the 21-year-old Briton said it 'feels amazing'.

Norris had been in the top five in the opening two rounds of the session, but it was the drying conditions at the end of Q3 that gave him the opportunity to strike for the top spot.

Norris was one of the first drivers to switch from intermediates to a set of soft slick tyres for his final run that saw him punch in a time of 1:41.993s, half a second quicker than anyone else.

"It was quite a manic session, but it was going well and obviously we made the decision in the end to go to slicks," he told Johnny Herbert and the media in parc ferme after the end of qualifying.

Judging when to make the switch was crucial, bot just in terms of managing the risk of skidding off the track but also the crossover point in the conditions when the slicks would be able to deliver better performance

"It was tricky, you know, because it was really that crossover section, and the lap before I was like two seconds down, and I wasn't very confident that we were going to improve on the previous lap.

"I kept the tyres warm and prepared the final lap," he continued. "I risked quite a bit, I'm going to admit, and it paid off so I'm a happy boy!

"You never think you're going to get a pole until you get it, and now I've managed to do it," he added. "Oh boy, it feels amazing. I don't know what to say!" 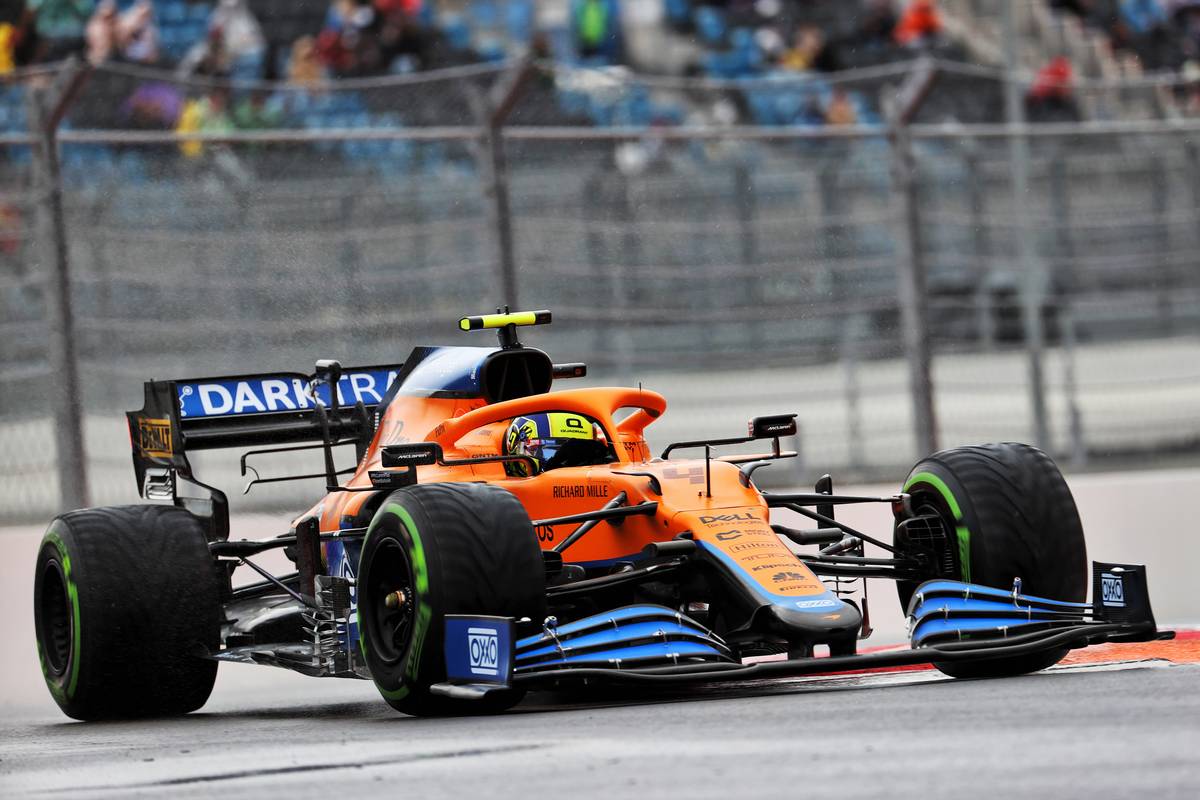 McLaren was already on a high after clinching its first 1-2 success in over a decade last time out in Monza, with Daniel Ricciardo taking victory and Norris crossing the line just behind him in second.

At the time Norris had swallowed any disappointment in missing out on the win and confidently predicted that "my time will come" but no one expected it to come quite this quickly, with Norris now ideally placed to secure a second consecutive victory for the team on Sunday.

"Especially after Monza this is an awesome way to start," Norris agreed. "I guess coming off of Monza it's not something we really expected. But these kind of conditions are when we can take opportunities, and that's exactly what we did today.

"Hopefully we can continue it again tomorrow," he added.

Norris will start tomorrow's race alongside his former team mate Carlos Sainz who now drives for Ferrari, while Williams' George Russell secured a surprise third place on the grid ahead of Lewis Hamilton.

Ricciardo was fifth fastest at the end of the session but faces an investigation by the race stewards for allegedly impeding Aston Martin driver Lance Stroll at the start in the first round.

Charles Leclerc and Max Verstappen didn't feature in the final round of qualifying, with both drivers set to start form the back after incurring penalties for making engine changes.