Valtteri Bottas drove a flawless race for Mercedes to secure victory in the 2021 Turkish Grand Prix at a wet Istanbul Park.

Max Verstappen was satisfied with second place to retake the lead in the drivers championship, with his team mate Sergio Perez in third for a valuable double podium for Red Bull.

Ferrari's Charles Leclerc attempted to go the distance on a single set of inters but ended up fourth after pitting, just ahead of Lewis Hamilton who was not happy when he was also ordered to pit in the closing laps as he bid to overcome a ten place grid penalty.

Rather against expectations, it had been a cold, wet and overcast morning in Istanbul in the build-up to the Turkish Grand Prix. As the cars headed to the grid for the start of the race there was still heavy drizzle in the air preventing the track from drying, leaving it greasy and slippery. It meant that intermediates were the tyre of the choice for all 20 starters as Valtteri Bottas led Max Verstappen to the start line, followed by Charles Leclerc and AlphaTauri's Pierre Gasly. Someway back - almost lost in the murk and gloom - Lewis Hamilton took up his 11th having served his ten place penalty, leaving the reigning world champion with his eyes on damage limitation and maybe, just possibly, a podium finish if all went to plan. 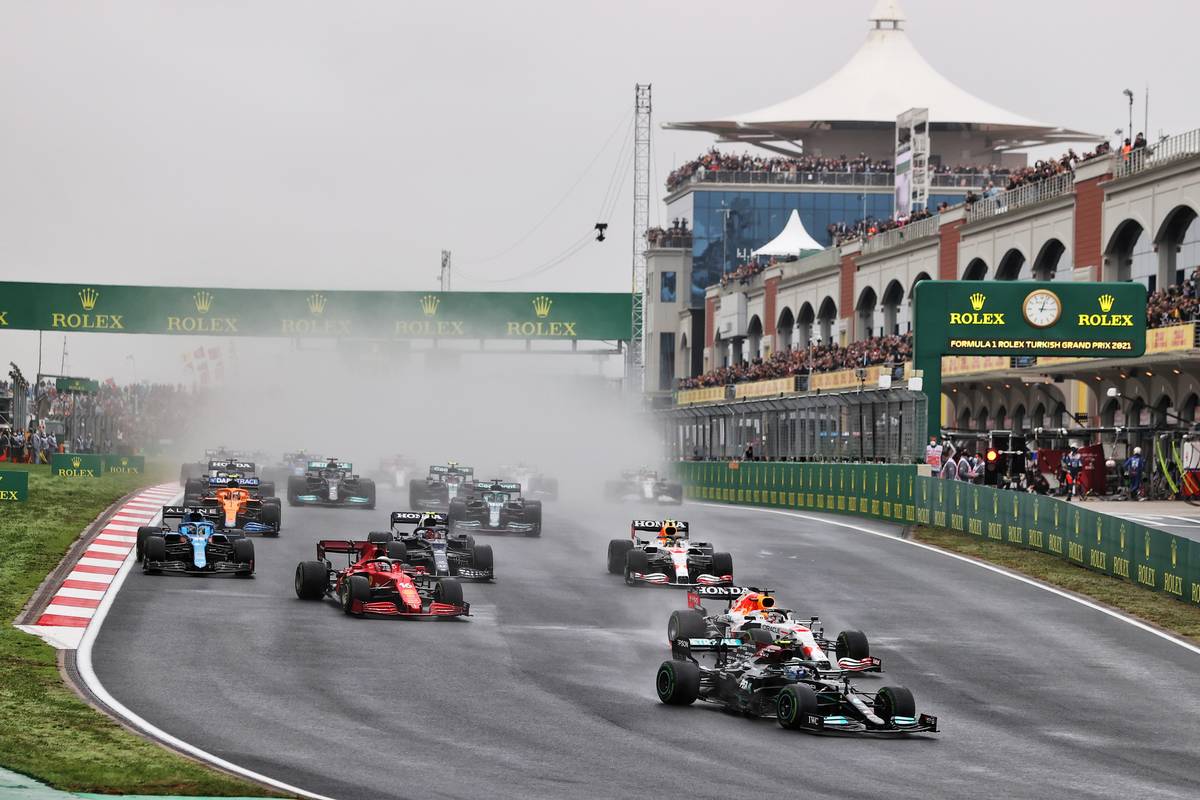 A slow start from Verstappen enabled Bottas to secure the lead into turn 1 with Leclerc probing down the outside line but ultimately settling back into third ahead of Gasly, who was himself busy fending off Fernando Alonso. That spat resulted in the Alpine being sent spinning around, fortunately without collecting anyone else or hitting the barrier as he dropped to 15th, with Gasly subsequently handed a five second penalty for causing the collision. Sergio Perez benefitted from the clash ahead of him to move up into fourth ahead of Gasly, with Lando Norris sixth from Lance Stroll and Yuki Tsunoda. Aware of the need to get a move on, Hamilton took a no-nonsense approach to pass Sebastian Vettel for ninth even at the risk of potential damage to his front wing.

The cars settled into an evenly spaced formation with around two seconds separating each of the cars in the top ten. It was closer between the cars running further down the order, wth Alonso having his second incident of the day in the form of contact with Mick Schumacher. The Haas was bumped off and rejoined at the back, Alonso inevitably earning himself a five second penalty from the stewards for triggering the clash. Having a better time of it were back row starters Carlos Sainz and Daniel Ricciardo, quickly up to 14th and 15th respectively after having served their grid penalties for taking on completely new power unit components this weekend. Sainz soon dispatched George Russell, Kimi Raikkonen and Antonio Giovinazzi in quick succession to rise to 13th place by lap 8.

By contrast Hamilton's progress had been temporarily thwarted by Tsunoda, who was robustly resisting the Mercedes driver's advances. Finally the superior pace of the W12 proved too much for the Japanese driver to hold off, and Hamilton blasted around the outside of the quick left-hander turn 3 to pick up eighth place on lap 8, with his sights immediately now locked on Stroll's Aston Martin ahead. This time it took Hamilton just one lap before pulling off a carbon copy repeat of his previous successful pass. Lap 11 then saw Hamilton make easy work of slipstreaming and passing Norris, this time at turn 12, setting the fastest lap of the race so far on the way even though the track was still stubbornly refusing to dry. After that it was time to start reeling in Gasly. 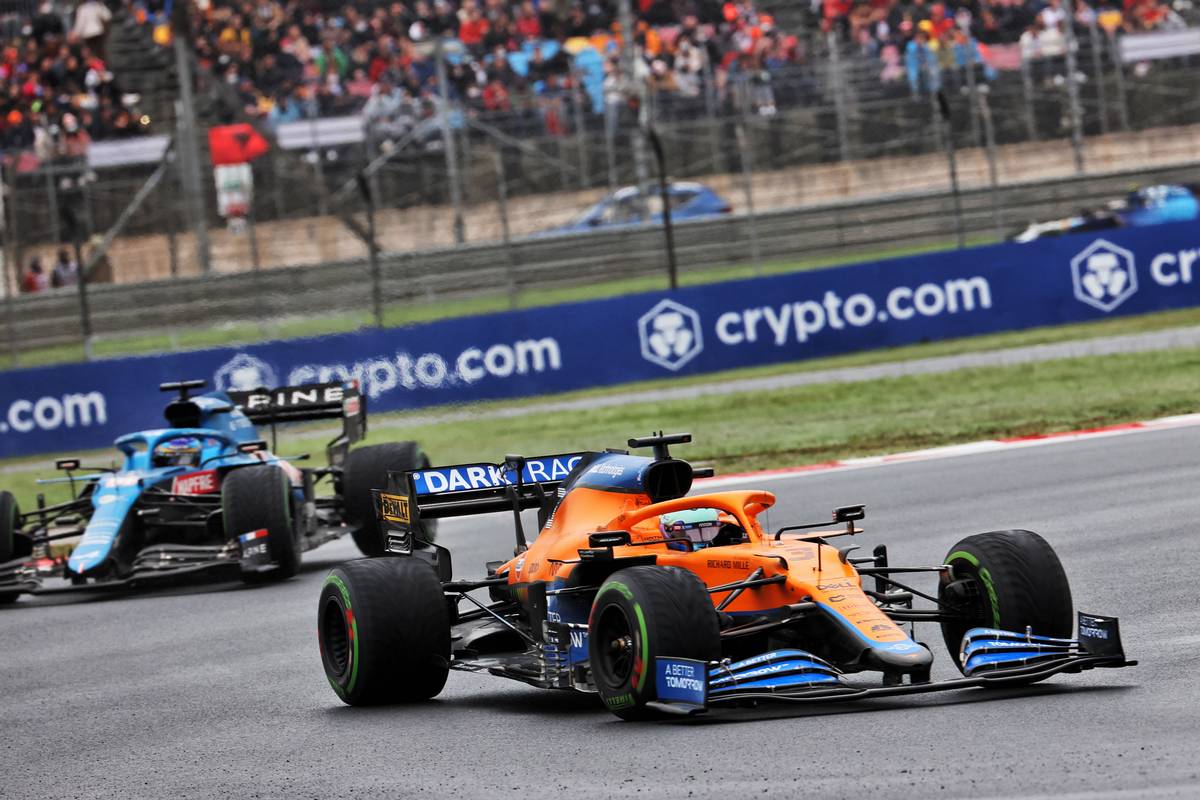 Lap 15 saw Hamilton get a huge tow down the straight to make it relatively straightforward to pass the AlphaTauri at turn 12, putting him up to fifth. However he was still eight seconds off the back of the next car up the road in the form of Perez, who would undoubtedly be intent on making life difficult for the Mercedes driver. Hamilton was still setting fastest laps but increasingly worried about excessive wear on the front intermediate tyres as the focus turned to the timing of pit stops. There were no obvious gaps in the running order to exploit and the track was still stubbornly refusing to dry to allow a switch to slicks, with Bottas and others reporting that the rain had picked up again in recent laps. The other man on the move was Sainz: having bumped his way past Vettel on lap 14 (escaping possible censure from the stewards in the process), the Ferrari man made quick work passing Tsunoda on lap 18. However Ricciardo hadn't managed to keep up and was still down in 16th place just ahead of Alonso, the McLaren clearly not enjoying the conditions this weekend.

With little to lose, Ricciardo was the first driver to blink in the game of pit lane chicken, coming in on lap 23 for a new set of inters. Shortly after the yellow flags came out for a spinner - but it wasn't Ricciardo but rather Tsunoda getting out of shape at turn 9. That threw away all his earlier hard work as he fell to 17th just ahead of Ricciardo, who didn't appear to be finding any immediate extra speed from his fresh wet weather rubber compared to the pace of his team mate Norris on a used set. It was something that the other teams noted with forensic interest and it wasn't until lap 32 that Alonso was the next man to take the pit stop bait.

In the meantime Hamilton survived a scare lapping a heedless Nikita Mazepin at turn 12 on lap 29 and continued his march on Perez who was now within DRS range. The Mexican continued to play his part in the Red Bull race strategy by holding Hamilton at bay with a stellar defence of his position through the final corners of lap 34 and into turn 1, Perez complaining that Hamilton had forced him into the pit road during their battle. 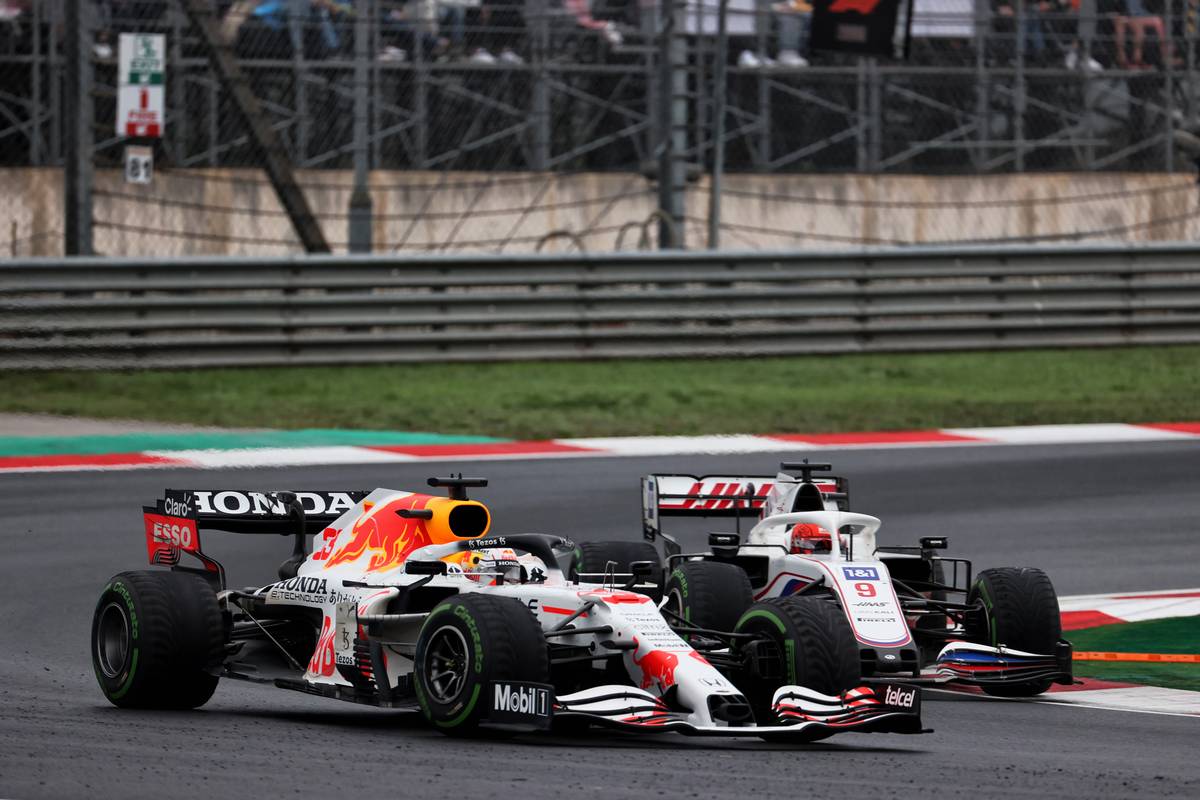 With Ricciardo's pace picking up, lap 37 saw Max Verstappen pit for the first (and only) time for new inters, returning to the track just ahead of the Gasly/Hamilton battle. Sainz was also in, but a slow stop cost him track position by the time he came back out. Norris, Tsunoda and Russell also pitted, but the big shock was Vettel taking on a new set of slick tyres - which quickly proved to be a terrible choice. It left him crawling back to pit lane for replacement inters with his tail between his legs after immediately aquaplaning off.

Bottas soon pitted, leaving Leclerc minding the store in the lead. Perez was also in, freeing up Hamilton who immediately set a time one second quicker than a struggling Verstappen was managing on much fresher inters. When Mercedes then told him to pit, Hamilton immediately objected and opted to stay out, but the team were less convinced that the inters could last the entire race without failing catastrophically. Leclerc also wanted to stay out but he promptly locked up and oversteered at the apex of turn 12 which lost him a second of his advantage over Bottas, who was ratcheting up the pace and closing down the gap to the Ferrari. Leclerc's gambit finally faltered on lap 47, when Bottas caught and past him, at the same time as his team mate Sainz picked off Ocon for eighth. Leclerc finally surrendered to the inevitable and pitted on lap 48 coming back out on fifth behind Hamilton who still seemed untroubled on those worn inters. 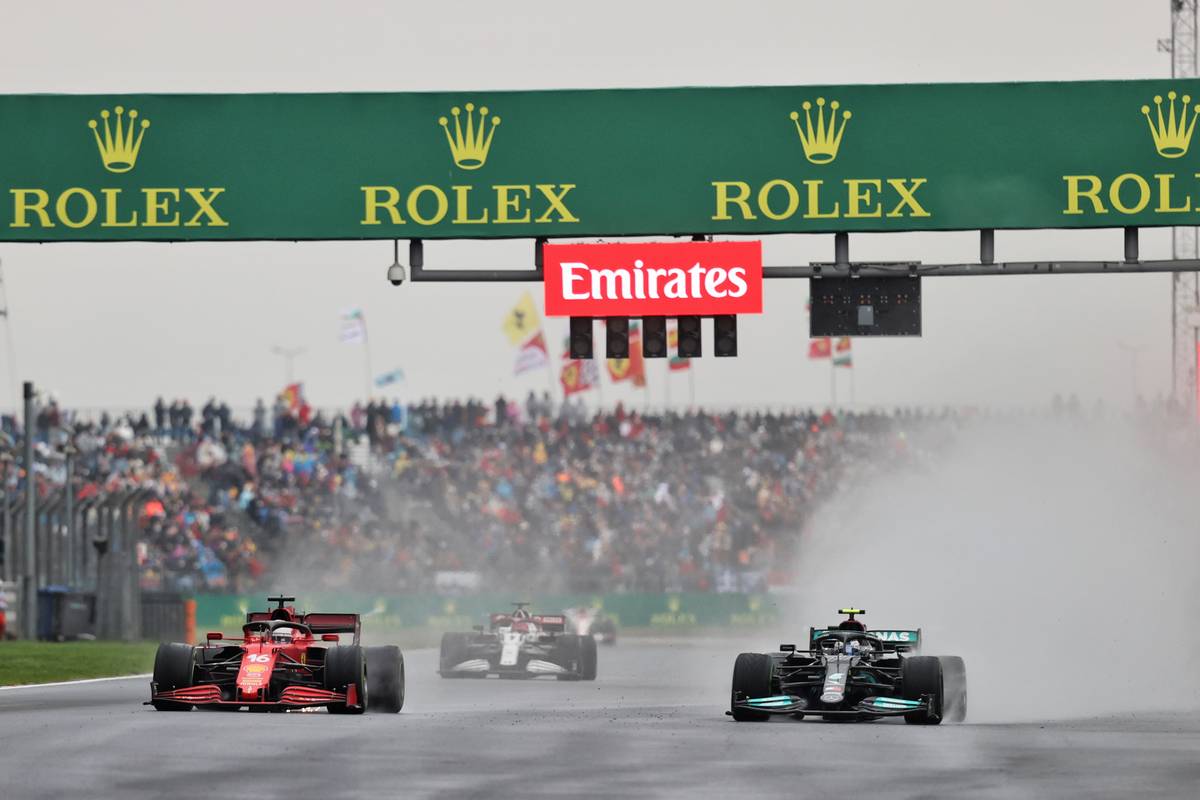 However the improved pace of Gasly meant that Hamilton was at imminent risk of losing the option to pit and come back out in the gap on track for fifth; with the real chance of tyre failure combined with gathering rain clouds overhead he finally acceded to orders from the Mercedes pit wall to come in on lap 51. But he really wasn't very happy with the decision, and grew less content as the final laps of the race unfolded..

The lead of the race was firmly in the hands of Bottas who had a 7.5s advantage over Verstappen, the Red Bull driver having reported problems with his car's steering although he still had a 20s lead over Perez in third. Meanwhile Leclerc was struggling to get his new inters up to temperature in order to hold off Hamilton, who now had Gasly and Norris breathing down his neck with four laps to go. Finally the situation stabilised as all the various new sets of tyres bedded in, and the order of the top seven was unchanged at the chequered flag with Sainz, Stroll and Ocon taking the remaining points positions, the Frenchman the only driver to make it all the way to the finish without a pit stop although by the end he was losing time hand over fist compared with those around him.

Just missing out on the top ten were the Alfa Romeos of Giovinazzi and Raikkonen, with Ricciardo 13th followed by Tsunoda, Russell, Alonso, Nicholas Latifi, Sebastian Vettel and finally the two Haas cars of Schumacher and Mazepin, with no retirements despite the tricky conditions. 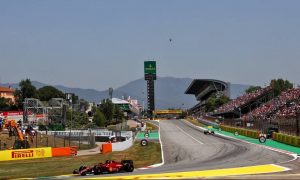