Christian Horner says Max Verstappen's triumph in Austin – a hunting ground historically dominated by the mighty Mercedes team – was "a big one" for Red Bull.

A flawless performance in the US Grand Prix coupled with a bold undercut strategy allowed Verstappen to overturn an early deficit to Hamilton and then fend off the seven-time world champion to conquer his eighth win of the 2021 season.

The triumph puts the Dutchman 12 points clear of his rival in the Drivers' championship with five rounds to go while Red Bull reduced its gap to Mercedes in the Constructors' standings to 23 points.

"This is a big one because it has been such a stronghold of Lewis and Mercedes," said Horner.

"To get the pole was a landmark moment for us and then to convert it into a win even though we weren’t leading at the end of the first lap." 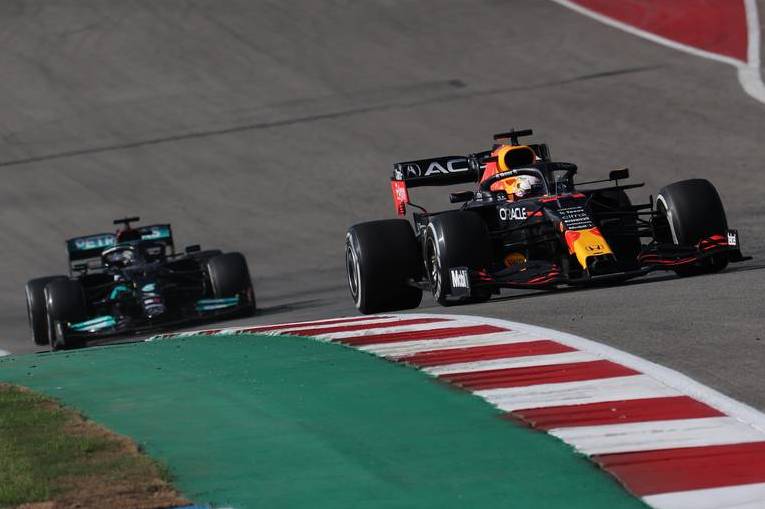 While the battle between F1's top two protagonists was fought on the track and won by a "phenomenal" Verstappen, Horner also underscored the crucial strategic dimension of the race at the Circuit of the Americas.

"I think we were quicker on the Medium tyre and Max could see that Lewis was sliding around a lot and we were in danger of overheating our own tyres by being stuck so we decided to take the gamble and bag some free air," added the Red Bull team boss.

"It was then going to put us under pressure at the end of the race as it was inevitable that Mercedes would run long.

"We were able to push them to pit early in the first stint by getting Checo in as well.

"Of course, they then had the ability to go long in the middle stint to give them an eight-lap tyre advantage to the end of the race.

"Max did a fantastic job managing the degradation and having enough rear tyres left for those crucial final five laps when Lewis was looming large. A phenomenal performance by him."

Horner admitted enduring a stressful finale on the Red Bull pitwall, especially when Verstappen caught up with backmarker Mick Schumacher on the penultimate lap.

Although the Dutchman lost time to Hamilton as he was running in the wake of the Haas, there was a silver lining to his plight.

"Mick on the last lap cost us, but he also gave us DRS – he nearly gave me a heart attack as well," Horner said.

"But Max just managed to keep enough in hand and that was a classy, classy drive, a crucial drive.

"I think I’ve aged about 25 years in that race. I really didn’t think we could hang on at the end there because it was such a long stint and we were out of tyres.

"For him to protect the tyres, hang in there and be quick where he needed to be, he deserves that victory today."