Carlos Sainz says he was confused and unhappy with a call by the stewards in the US Grand Prix that ordered him to swap positions with a McLaren to which he believed he had already yielded.

Sainz enjoyed a frantic scrap with both Daniel Ricciardo and Lando Norris on the opening lap of the race, initially gaining the upper hand over the pair before settling in between the McLaren duo.

Sainz had purposefully yielded to Ricciardo, fearing a call from the stewards a dicey wheel-to-wheel fight with the Aussie.

The call did indeed come but it was an order for him to relinquish his position to Norris, not Ricciardo, a decision the Spaniard vehemently contested as it ultimately set him back not one, but two positions in the running order.

"On Lap 1 there was a bit of a mess with the two McLarens, fighting the two of them, trying to defend, and in the end I made it ahead of them but I decided to let by one of them just in case the stewards were going to take action," Sainz told Sky F1.

"And in the end, they even took action even though I let them by. "A bit confusing to be honest and I don’t like how they play with the positions, because I think what I actually did - letting by one of them - was already quite genuine and should have been enough." 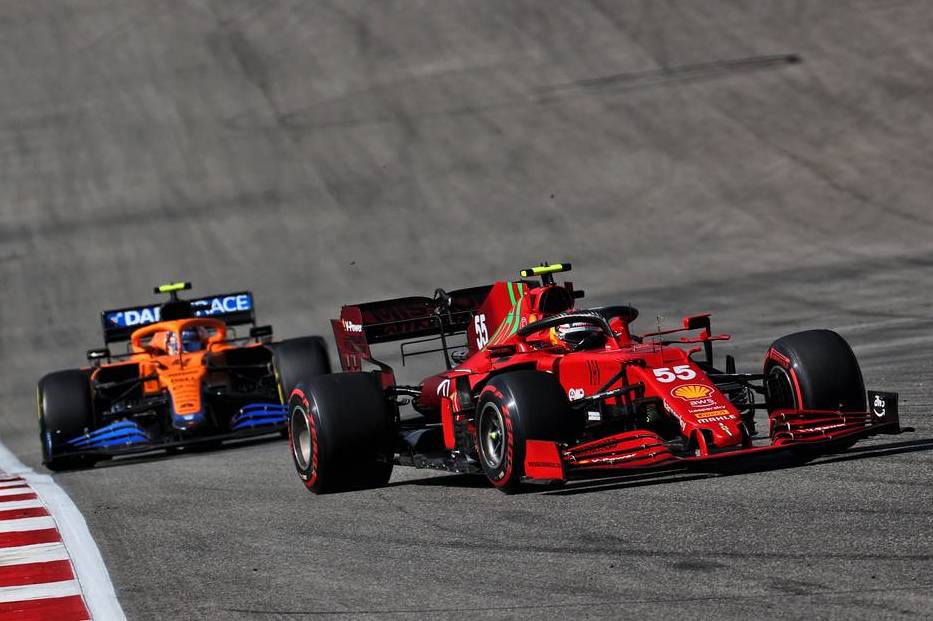 Sainz eventually gained an upper hand over Norris but despite his best efforts, the Ferrari charger was unable to overhaul Ricciardo for fifth, his strategic undercut attempt squandered by a slow pitstop executed by the Scuderia.

"I had to pass Lando and then I was stuck the whole race behind Ricciardo and we pulled the trigger for an undercut.

"But again, another slow pit stop didn’t allow us to undercut, and we got stuck again behind him. A pretty bad race for me."

During his spirited battle with Ricciardo, the Spaniard noted on the radio in the heat of the moment that the McLaren driver's defensive driving was "a bit dirty".

But Sainz, who went on to finish P7 after conceding a position to Valtteri Bottas on the penultimate lap of the race, later admitted that the Aussie's antics were just par for the course.

"My take is that the guy on the inside does this kind of thing on purpose always to try and squeeze the guy on the outside, I would have done the same," he explained.

"The thing is that it could have been rough with the contact, I think he could have done it a bit cleaner because I nearly spun, but it’s all good, I would have done a similar thing if I was in his position.

"It was a good battle, just we should have been ahead with the pit stop that we did to undercut him, and in the end we were again behind. We shouldn’t have been there."