Lando Norris admitted after Sunday's US Grand Prix that he had endured a scary first lap as he battled at close quarters with McLaren teammate Daniel Ricciardo and Ferrari's Carlos Sainz.

Norris launched his race from P7 on the grid and was running in the wake of Charles Leclerc, Ricciardo and Sainz when he closed in on the trio on the approach to COTA's Turn 12, briefly overtaking his teammate and Sainz before backing out of the move.

It was a heart-stopping moment for the Briton.

"I was so scared, because the thing is, it’s such a wide track and it was three abreast," Norris explained.

"I knew Daniel was on the outside so I had to be careful. I couldn’t brake too late because I knew Charles was just ahead.

"The angle, I was on the apex and Charles was pretty much… I was going to T-bone him if I went in any harder. It got a little bit sketchy, obviously didn’t pull the move off. Bit of a shame." 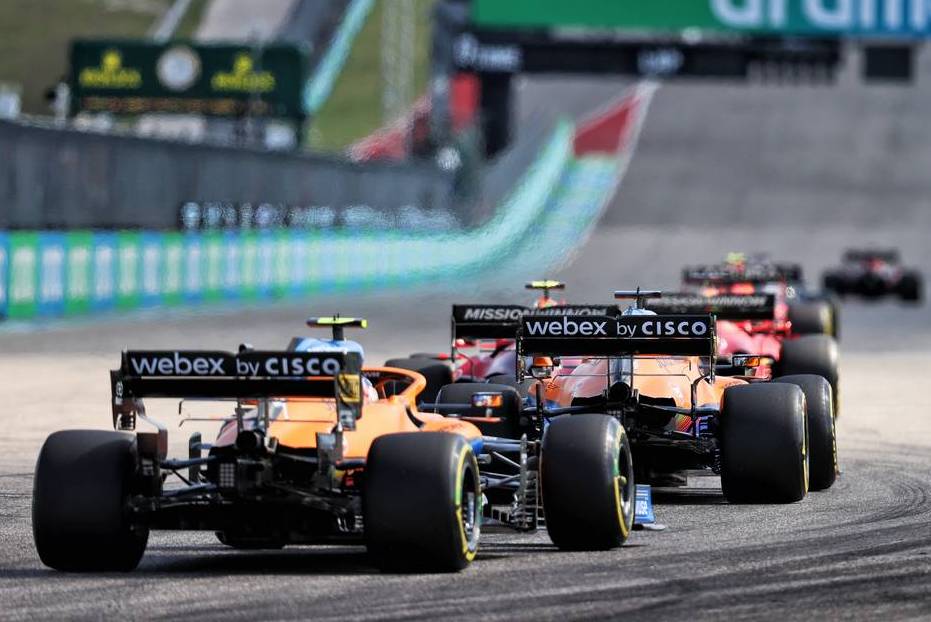 Thereafter followed a long afternoon for Norris who lost a position to Mercedes' Valtteri Bottas on his way to finishing P8 overall.

"But altogether, considering Charles was 20 seconds ahead or something on Daniel, I think it showed they [Ferrari] were just the quicker car again today. Disappointing we couldn’t do more, that’s the way it is sometimes."

The end result for the battle for third in the Constructors' standings saw Ferrari reduce its deficit to just 3.5 points with five races to go.

Norris reckons the performance comparison between the McLaren and Ferrari will continue to ebb and flow.

“You don’t know how much they’re saving, everyone is going to be doing something along those lines, everyone’s playing their own game," he said.

"Of course it sometimes yo-yos a bit, you catch up, then drop back and so on. Either way, even when we were at our best pace, the delta is too small.

"Two-tenths ahead, it’s too difficult to overtake. You need to be one second quicker or something, we were never there."