George Russell put Mercedes at the top of the timesheets in second practice for the Miami Grand Prix, finishing a tenth of a second quicker than Ferrari's Charles Leclerc and Red Bull's Sergio Perez.

But it was a terrible time for Perez' team mate Max Verstappen who failed to complete a lap. Initially losing time as the team undertook a precautionary gearbox change, the Red Bull then suffered a steering issue followed by a dramatic brake fire.

Accident-prone Carlos Sainz had another costly spin that put the Ferrari into the barrier and out of action, and there was a second red flag when Nicholas Latifi parked his Williams at turn 9. Valtteri Bottas did not take part in the session due to damage to his Alfa Romeo sustained in FP1.

The first practice session at the brand new, just-completed Miami International Autodrome had seen Ferrari's Charles Leclerc finish fastest and the two Red Bulls of Max Verstappen and Sergio Perez close behind in the top four. But the surprise of the morning had been the improved running of Mercedes with George Russell second quickest, less than a tenth off the pace of Leclerc. Could the Briton maintain the upturn in form in FP2? 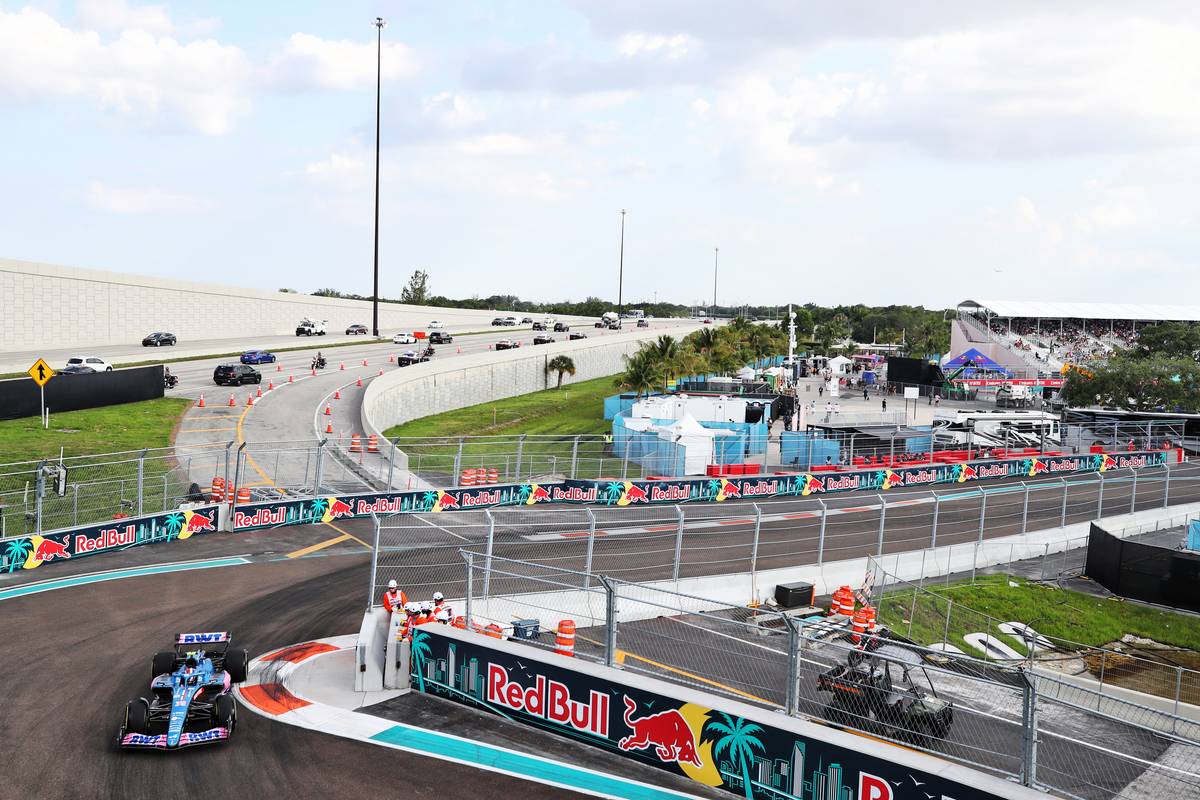 The drivers were certainly keen to get back to work and develop their understanding of the new circuit. However there was a notable absence when the lights went green at the end of pit lane, with Alfa Romeo confirming that Valtteri Bottas would take no part in the3 session after his accident in FP1. Verstappen was also still in the garage with the car up on stands as the Red Bull mechanics worked on the RB18, changing the gearbox on the car after he brushed the wall in FP1. The car had also been struggling with overheating in the hot and humid Florida conditions.

Initially biding their time in the pits were the Mercedes pair of Russell and Hamilton, who were seemingly waiting for more rubber to go down on the virgin asphalt. Of those drivers who were out and circulating, medium tyres were the early choice of tyres with Alpine's Esteban Ocon installing himself at the top of the timesheets with a time of 1:32.906s. That was half a second clear of McLaren pair Lando Norris and Daniel Ricciardo, with Carlos Sainz initially fourth for Ferrari before he jumped to the top on a subsequent push lap and continued to improve from there, keeping him ahead of ever quicker times from Leclerc, Pierre Gasly and Zhou Gaunyu.

There was an early low-speed spin for Perez who lost the back of the Red Bull exiting turn 7 trying to make it into turn 8, but other than flat spotting his tyres there was no harm done and he was soon back on his way. There were issues for both Haas cars, Mick Schumacher having to return to pit lane with a loose sidepod and his team mate Kevin Magnussen shedding bodywork and depositing part of the VF-22's cooling louvre on track as he too headed back to base for running repairs. 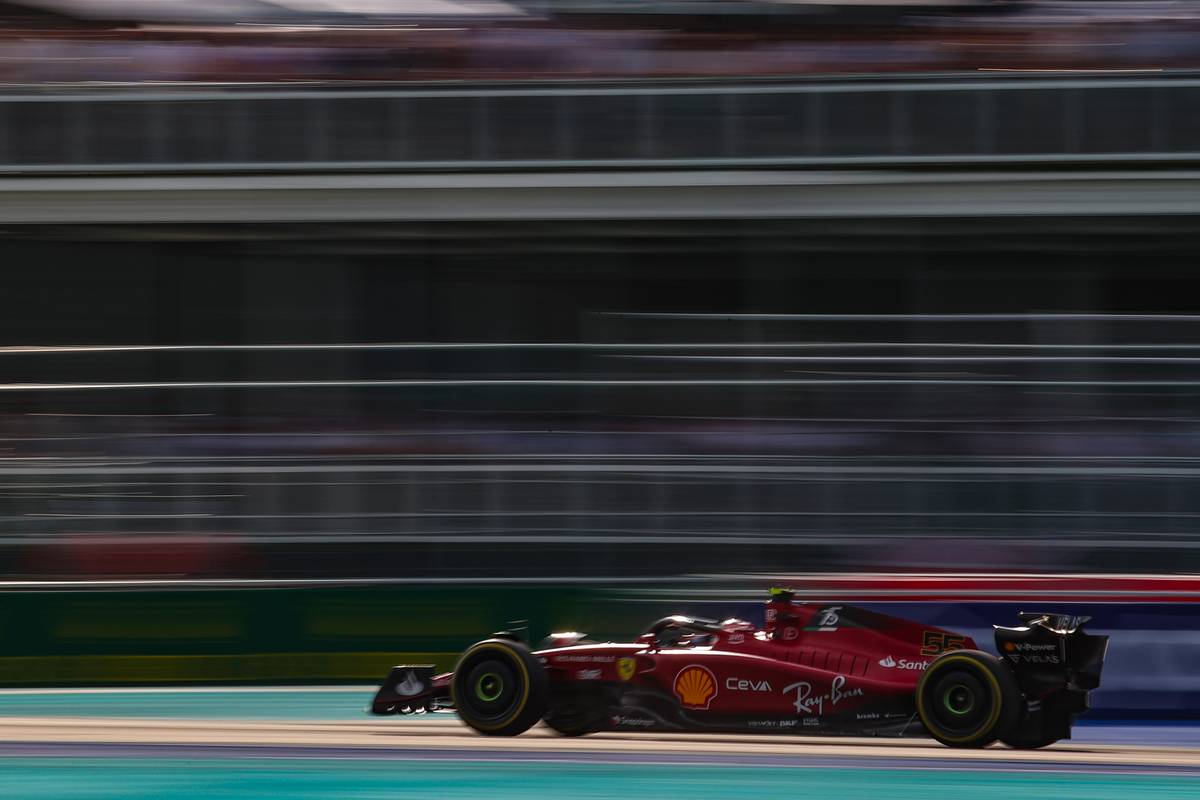 None of these incidents interrupted the session, but moments later the red flags were flying for a somewhat more serious matter. Sainz' terrible run of recent luck had continued, the Spaniard suffering another big accident. This time it happened at the chicane, where he came in too hot and lost the rear of the Ferrari. sending him spinning into the barrier at turn 14. It did enough damage to the F1-75 to ensure that it will be a long night ahead for the mechanics working to buff out the crumpled chassis.

The clock continued to count down as the marshals cleared the scene and removed the wreckage. When the cars led by Alpine's Fernando Alonso were able to get back to work there was just over half an hour remaining, and the loss of time meant that everyone was now concentrating on working on qualifying pace with soft compound tyres. Verstappen was finally able to join the fray, but before he could get up to speed he was reporting that there was 'something wrong' with unresponsive heavy steering. The Red Bull pit wall ordered him to return to the garage, but even as he obeyed the car started sending up alarming amounts of smoke with the rear brakes clearly alight. Once he did make it back to pit lane, the mechanics leapt into action with fire extinguishers but it was evident he would take no further part in the session.

In the meantime, the other drivers were already putting in some impressive push laps. Leclerc was back on top with a time of 1:30.044s which was 0.135s ahead of Hamilton, but moments later it was Russell who went a tenth quicker to shoot to the top with a new benchmark of 1:29.938s - all of which were further encouraging sighs for fans of the Silver Arrows, with Mercedes fielding their first significant upgrades of 2022 after struggling in the opening races of the season. 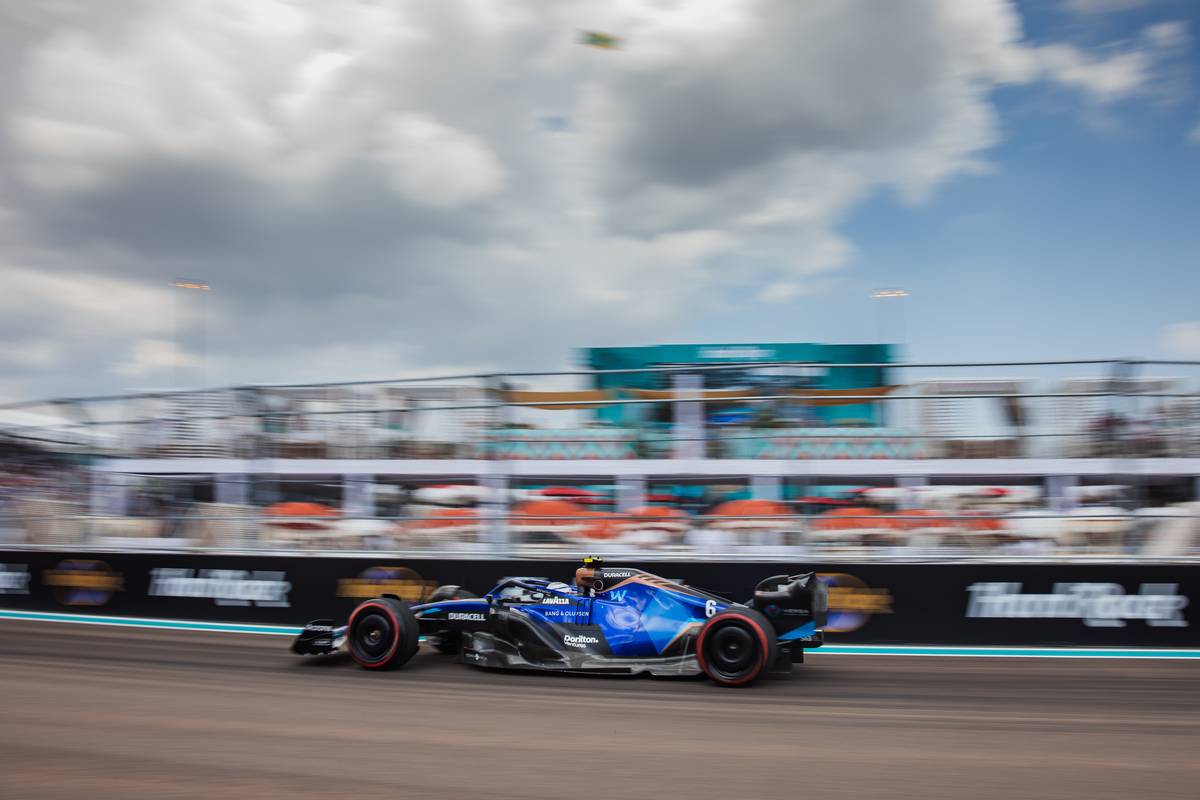 Despite brushing the wall on the way, Perez was able to pip Hamilton to third place while Alonso was up to fifth ahead of Norris, Gasly and Magnussen, briefly making it seven different teams in the top eight before Magnussen got pushed down to P10 by better laps from Zhou and Ocon. The teams were just turning to long race stint simulations when the red flags were out for the second time in FP2, triggered by Nicholas Latifi parking the Williams beside the track at turn 9 with a terminal technical issue on the FW44.

With only a little over ten minutes remaining on the clock once the track went green again, there was now insufficient time to get the laps in that the teams had been planning. The return to the medium tyres meant there was no change in the overall order, despite harmless late spins for Magnussen and Vettel before the chequered flag came out to bring Formula 1's historic first day in Miami to a conclusion.