The consensus surrounding Barcelona has always been that if a car performs well around the Circuit de Catalunya's 4.6 km layout, then it should perform well everywhere.

However, a contender's velocity down the track's main straight is no indication of a design's overall efficiency, as Alex Albon's strong top speed in qualifying tells us.

Albon's Williams was the second fastest car on the straight with a top speed of 333.4 kph, and yet the Anglo-Thai racer and teammate Nicholas Latifi were slowest overall in the Saturday afternoon session.

More interesting was Lewis Hamilton's maximum velocity in qualifying, with the Mercedes driver breezing through the speed trap at a whopping 337.7 kph!

The number not only outpaced Albon by over 4 kph, but it was faster than teammate George Russell's top speed by almost 14 kph, a difference between the two Mercedes chargers that suggests either an erroneous reading or that Hamilton benefitted from a massive tow at some point in the session.

Although Red Bull has typically topped the speed trap numbers this season, in Barcelona both Sergio Perez and Max Verstappen were oddly sat in the middle of the speed range, which perhaps indicates that the RB18 is running a higher downforce package in Spain.

The bulls' velocity on the straight was also just slightly higher than the top speed of Saturday's poleman, Ferrari's Charles Leclerc.

The bottom line? With few opportunities to overtake than at the end of Barcelona's main straight, top speed will come into play in Sunday's race.

But tyre degradation, especially in this afternoon's hot environment, is more likely to be the key differentiator this afternoon, with a two-stop strategy the traditional approach in Spain. 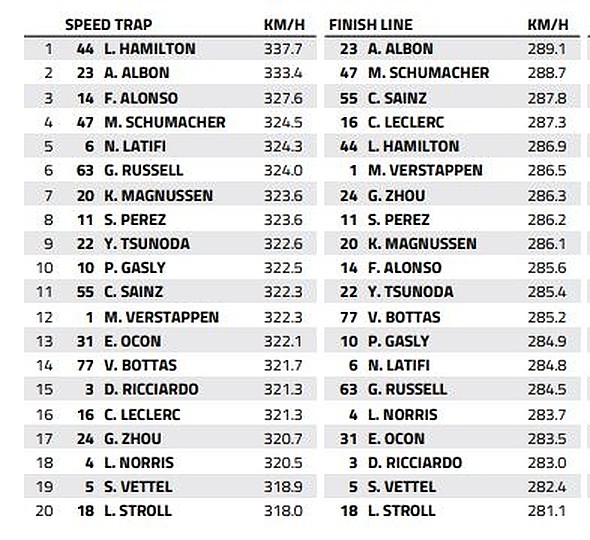