Max Verstappen was emphatically master of the treacherous wet conditions at the Circuit Gilles-Villeneuve on Saturday, and pole position for tomorrow's Canadian Grand Prix was never in doubt for the Red Bull driver.

But there were shocks and surprises elsewhere, with Alpine's Fernando Alonso joining Verstappen on the front row leaving Ferrari's Carlos Sainz starting from third place alongside Mercedes driver Lewis Hamilton.

Both Haas drivers made it through to the final round, with Kevin Magnussen and Mick Schumacher locking out the third row after George Russell's audacious gamble taking slicks for his final run in the Mercedes backfired and left him in P8.

Alfa Romeo's Zhou Guanyu made it through to Q3 for the first time while his team mate Valtteri Bottas just missed the cut at the end of Q2, as did Sergio Perez who crashed and trigged a red flag midway through the second round. 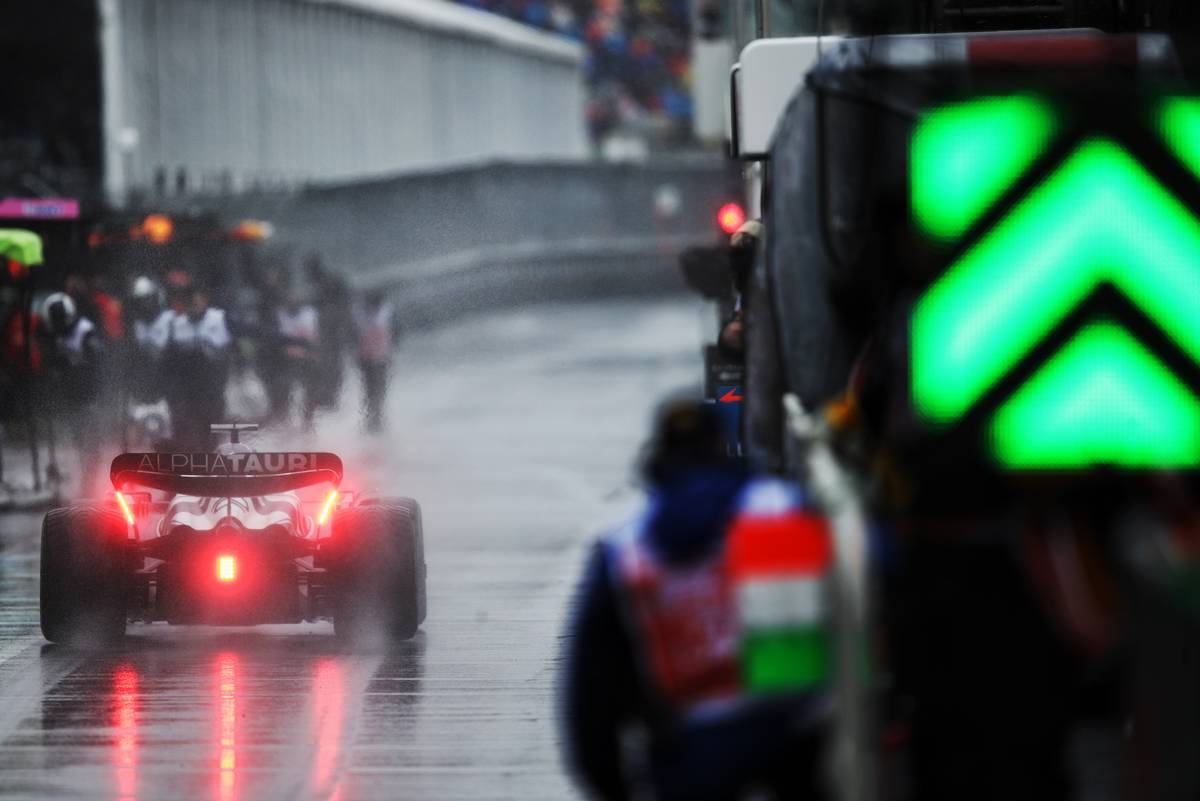 Since the end of a wet final practice, the rain had continued to fall and the Circuit Gilles-Villeneuve remained thoroughly soaked as the Alfa Romeos of Valtteri Bottas and Zhou Guanyu led the field out for the start of qualifying, everyone on extreme wets as befitting the atrocious conditions. The principal aim was to get a time on the board as early as possible before any incidents and accidents started to trigger disruptive and time-consuming yellow and red flags.

Q1: Verstappen masters the rain as Aston Martin and AlphaTauri all at sea

First on the board was Bottas with a time of 1:38.932s, but Zhou quickly bettered that and then it was George Russell going fastest for Mercedes with a time of 1:36.688s, seven tenths quicker than the first effort from Max Verstappen who had opted to put in only a limited number of laps in FP3. Lewis Hamilton was next quickest, with his second run putting him ahead of Alpine's Fernando Alonso and Aston Martin's Sebastian Vettel.

Verstappen was finding his sea legs now and posted a new target time of 1:35.830s, but the times were changing by the minute as the wet tyres lifted water off the racing line allowing Carlos Sainz to go top by 0.018s. Russell was then back on top with a new lap clocking in at 1:34.989s, eight tenths quicker than the Ferrari. All the cars were fuelled for the duration and just kept running, and soon Esteban Ocon was up to second ahead of Carlos Sainz, Pierre Gasly and Lando Norris. 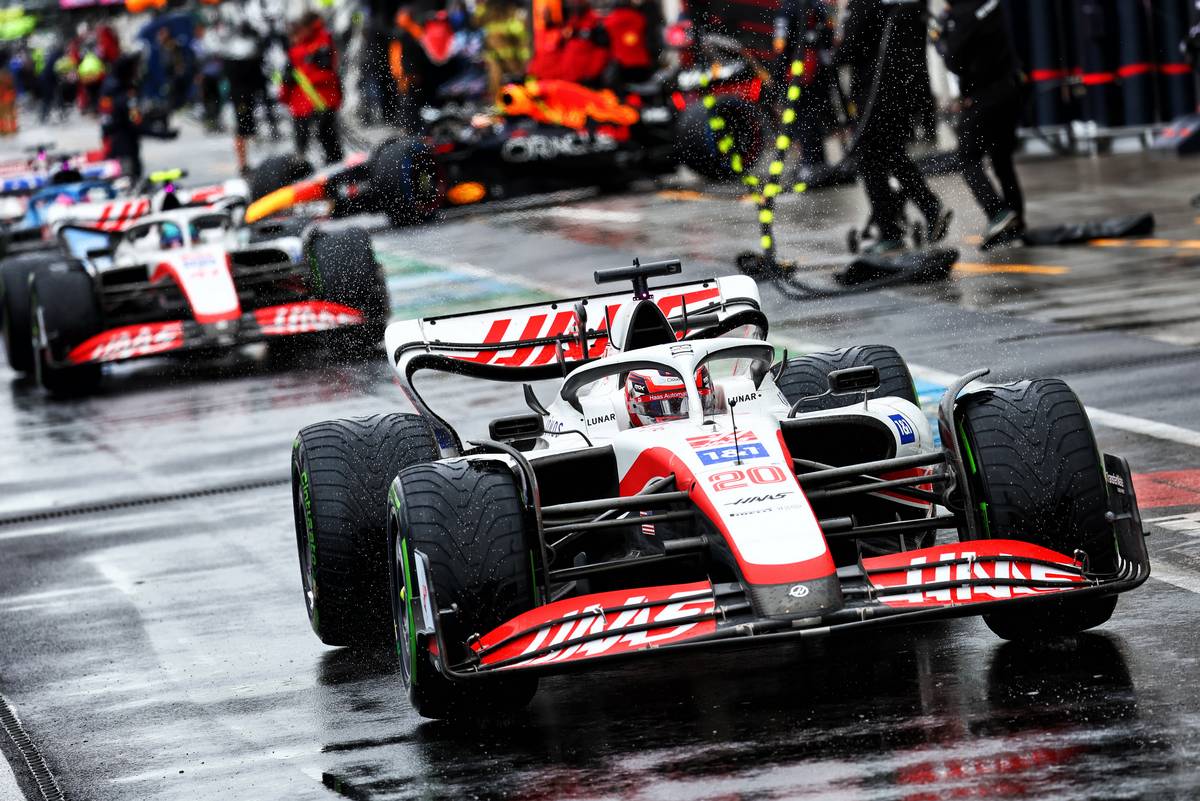 But things were far from settled at this point, as proven by Haas' Kevin Magnussen then going top with 1:34.893s and Bottas even better, before the two Mercedes cars of Russell and Hamilton reclaimed control only for Verstappen to instantly find another seven tenths more. Even that didn't last long, with first Alonso and then Sainz going quicker still. Meanwhile Nicholas Latifi went straight on at turn 1 with Lando Norris also running wide in the same corner, while Esteban Ocon drifted off onto the grass at turn 3 - all proof if any were needed that the conditions were still treacherous.

With such big swings in the times, the danger was being left among the bottom five when the music stopped at the end of this particular party game. At risk of elimination were the Williams of Latifi and Alex Albon, and surprisingly both Aston Martins who weren't showing anything like their earlier pace, while Yuki Tsunoda had headed back in pit lane given he had previously incurred a grid penalty for taking new engine components, and was already consigned to the back of the grid for tomorrow's race leaving him little motivation to continue.

A final flurry of flying laps - despite brief yellows for Sainz running deep in turn 3 - decided the matter. Verstappen managed to go back to the top with a time of 1:32.219s, half a tenth ahead of Alonso, with Sainz in third followed by Magnussen, Charles Leclerc, Ocon, Russell, Daniel Ricciardo and the Alfas of Bottas and Zhou rounding out the top ten. Further back, Albon had made a successful final push to get him out of the drop zone in 14th leaving Norris on the bubble clinging on by his teeth. It meant that Gasly was a surprise elimination in P16 and consigned to the sidelines along with Vettel, Stroll, Latifi and Tsunoda. 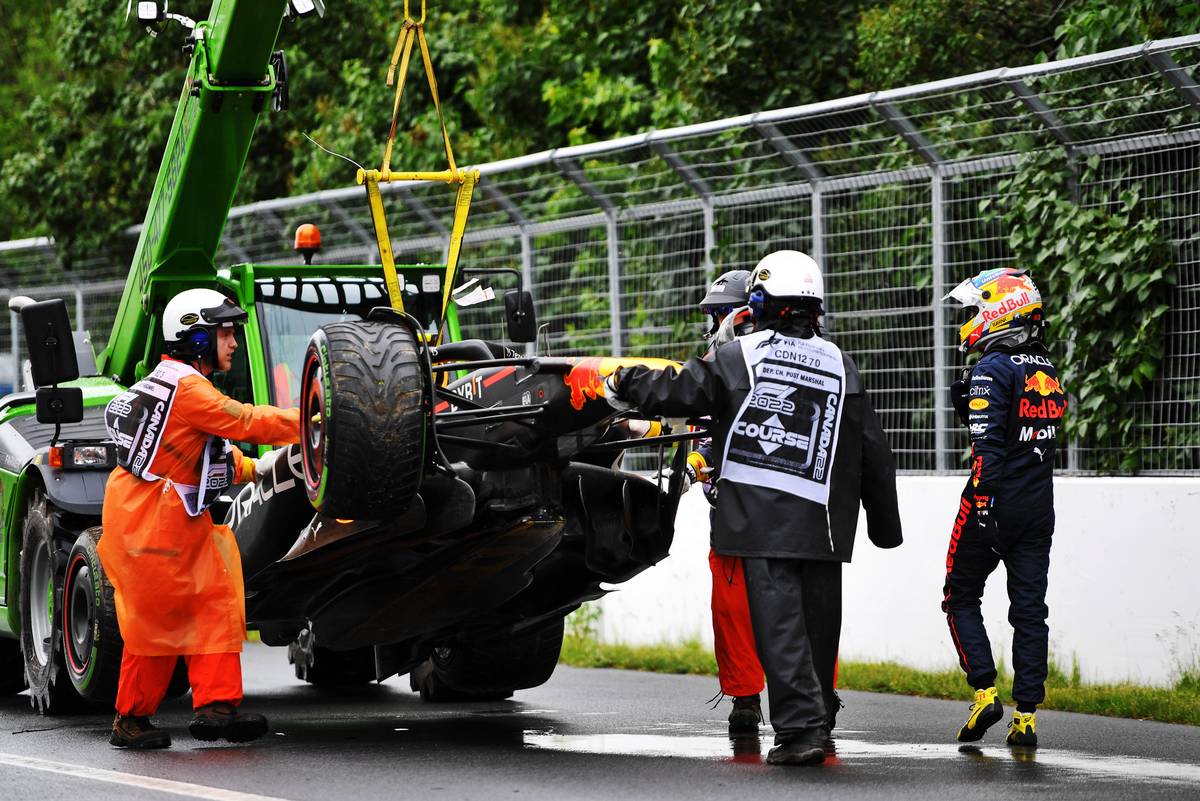 Q2: Verstappen top again from Alonso and Russell, after red flag for Perez

By the time the second round got underway, the sky was brighter and the rain had finally stopped. That tempted some drivers (including Alonso, Sainz, Magnussen, Ocon and Mick Schumacher) to switch to the intermediates while the rest of the field played safe for their first run. The Mercedes cars of Russell and Hamilton were briefly top but Alonso was then two seconds faster on the inters. Verstappen had just gone second ahead of Sainz, Ocon and Bottas when Albon went off at turn 6 having switched to the inters but his front wing appeared to have survived the light impact as he reversed back onto the track.

Sergio Perez then had a bigger hit into the barriers between turns 3 and 4; he tried to extricate the Red Bull but it appeared stuck in the plastic blocks. The low traction of the wet grass not giving him the leverage needed to pull free, forcing race control to red flag the section to allow the marshals to render assistance and restore order to the TechPro components. It was a disaster for the Mexican, who was still shown in eighth place but his time unlikely to last long once the session restarted with nine minutes still on the clock.

The interval allowed the track to dry out further by the time everyone was back out, all now on inters. Verstappen was soon moving the goalposts again with a time of 1:27.764s proving over a second faster than the latest from Alonso, Sainz, Russell, Schumacher and Ocon. Magnussen found more time to briefly jump into second, and Sainz, Russell and Hamilton also advanced but Verstappen nonchalantly punched in a new session best time of 1:25.201s to maintain his one second advantage. Russell then improved to stay second, but Hamilton had found himself shuffled back by the wild flurry of better times all through the field and was out of the top ten with one last run remaining.

When the water spray settled after the chequered flag, Verstappen had just held on to the top spot with a final lap of 1:23.746s, a second clear of Alonso with Russell third quickest from Sainz. Hamilton was through in fifth ahead of Schumacher, Zhou (a first career Q3 appearance for the Chinese rookie), Ocon, Magnussen and Ricciardo. Bottas just missed out in the final seconds, while Albon ended up 12th and the sidelined Perez sank to P13 following his accident. Lando Norris had been unable to set a lap time due to a power unit issue, and Charles Leclerc decided to stay dry in the Ferrari garage given his back row starting spot for tomorrow had already been mandated by grid penalties. 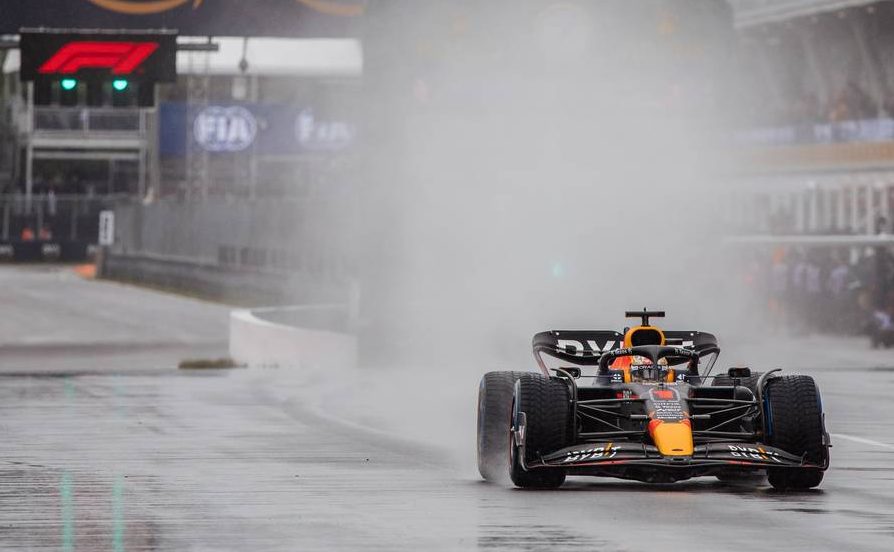 Although a dry line was now clearly evident in some sections of the track, the amount of standing water in key sections meant everyone was still playing safe on inters when they came out to get the final round of qualifying underway. Hamilton was first on track to set a time but Russell was instantly 0.354s quicker than his team mate. Both were a long, long way off the time of 1:22.701s then posted by Verstappen. Sainz soon slipped into second place ahead of Alonso, but no one was within a second of the mighty Red Bull.

Verstappen's next lap was off the pace and he headed for the pits for a change of tyres, allowing others the opportunity to close the gap in his absence - Sainz moving up to second place, now just 0.231s behind the Dutch driver and ahead of Alonso and Schumacher. The rest of the drivers also pitted, and came back out on inters for their final push - with the singular exception of Russell who was gambling on being the only man on slicks at the end of the session, opting for a set of the soft compound. Would it pay off or would he end up in the scenery?

It didn't take long to get an answer as the Mercedes hit standing water in turn 2 and sailed off, although he avoided hitting anything on the way and was able to limp home. Meanwhile his team mate Hamilton was briefly up to second, although by now Verstappen had again gone to warp speed with a new top time of 1:21.620s putting him out of reach. Verstappen then took another four tenths off his time to keep him well ahead of improved times from Alonso and Sainz by the chequered flag leaving Hamilton in fourth ahead of a brilliant all-Haas third row consisting of Magnussen and Schumacher. Ocon finished just ahead of Russell, with Ricciardo and Zhou rounding out the top ten for tomorrow's grid. 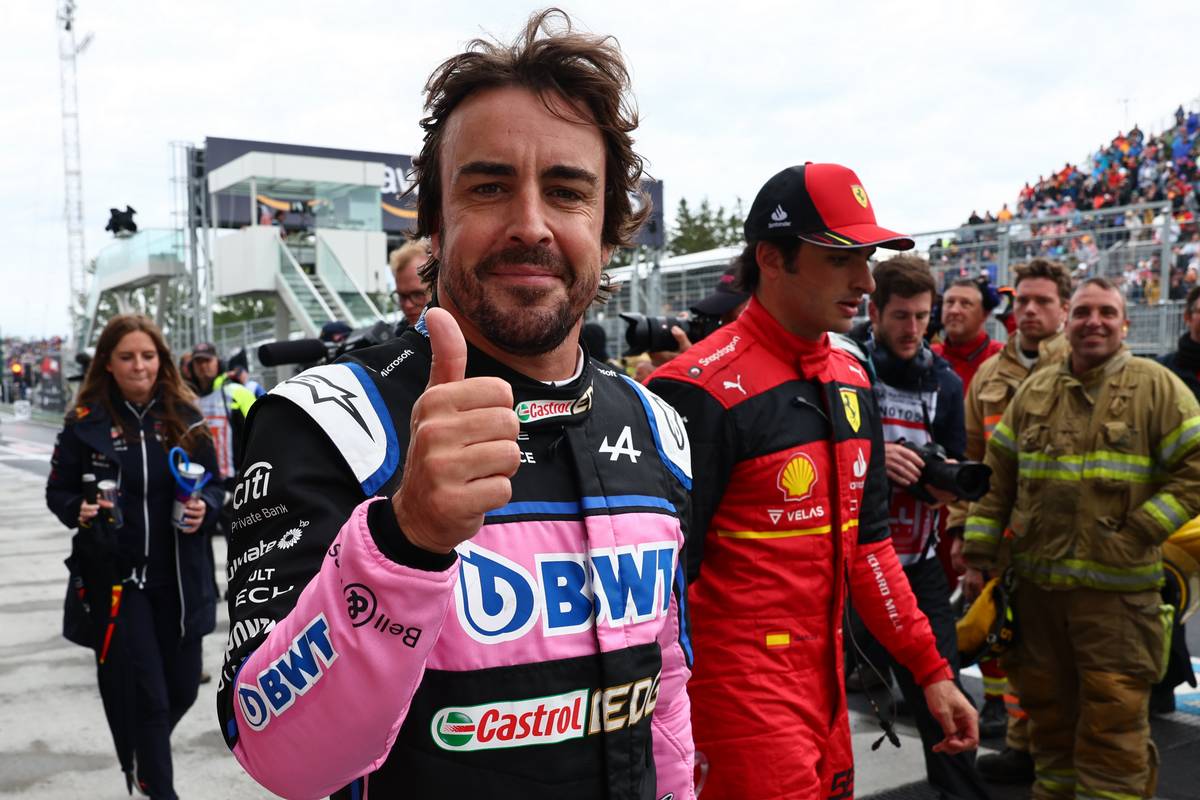