Max Verstappen had looked set to challenge for the prize with his final run only to be suddenly ordered to abort and come in by the Red Bull pit wall, meaning he will start from eighth place on the grid for tomorrow's Singapore Grand Prix.

George Russell was also upset by the outcome of the qualifying session after missing the cut at the end of Q2, in a wet/dry session that saw huge swings in times over the course of the hour.

After a final practice session that had been truncated due to some very wet conditions at the start, there had been no more rain since sunset allowing the track to largely dry out during the intermission. It was much better for the start of qualifying under the dazzling spotlights of Marina Bay Street Circuit, but there were still plenty of remaining hazards lying in wait to catch out the unwary. 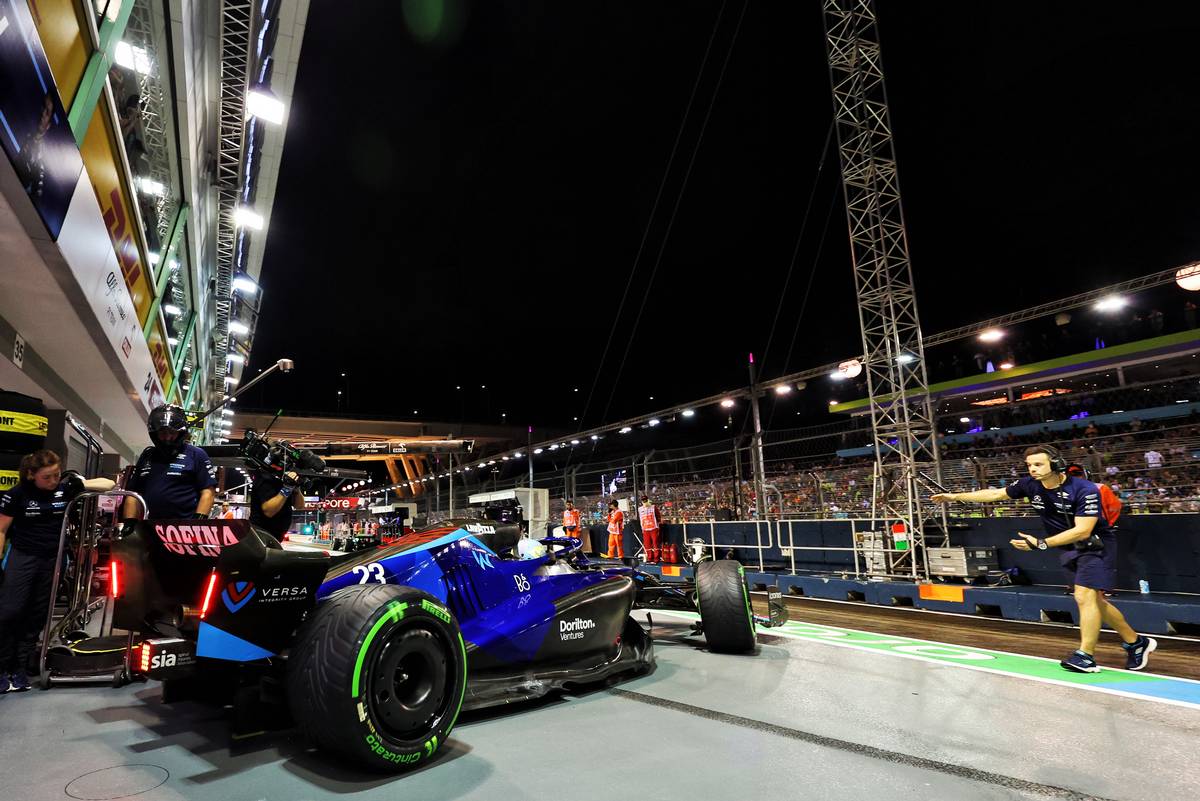 Mercedes pair Lewis Hamilton and George Russell were first to head out, and they were putting caution first by starting their session on intermediates due to some remaining very wet patches at turns 7 and 8 and then turns 17 and 18. The rest of the field concurred with their approach, with Lando Norris soon advising the McLaren pit wall that it was "still a bit damp" to consider slicks.

The first banker laps put Hamilton top with a time of 1:56.937s, 0.162s quicker than his team mate. While significantly slower than Friday's times on the slicks, it was a full second and a half ahead of AlphaTauri pair Yuki Tsunoda and Pierre Gasly. But the track was evolving fast, and Russell's next lap went a second clear of Hamilton. Charles Leclerc then found a similar level of improvements to move ahead of both Silver Arrows cars with a time of 1:55.054s before Red Bull's Sergio Perez then split the two Mercedes for third place with his first lap proving a second slower than the Ferrari.

The timesheets were moving fast, Hamilton going top again with a time of 1:54.689s ahead of Leclerc and Carlos Sainz who was now ahead of Russell, Perez and Norris, but everyone was finding it hard to stay on track. There are plenty of brief yellow flags breaking out forcing other drivers to back off in response. Max Verstappen was next to find more time with a lap of 1:54.395s, but even he was not tempted to switch to slicks yet: "It's still inters," he told his race engineer. 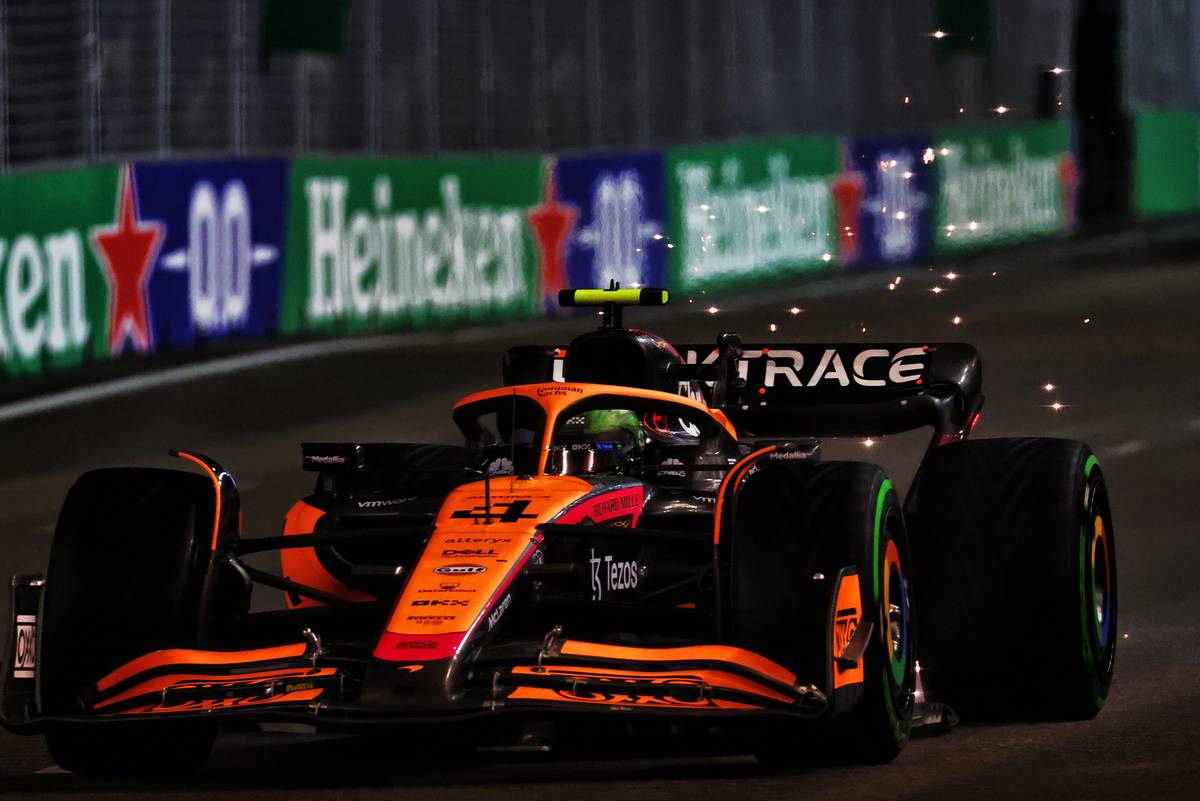 With six minutes remaining, Leclerc was once again on top with a time of 1:54.222s ahead of Verstappen and Perez but even he was struggling to keep the car on the circuit. Meanwhile those at rick of elimination included Williams Alex Albon (who missed the weighbridge and had to be rolled back, costing him vital seconds) along with Yuki Tsunoda, Nicholas Latifi and Haas pair Kevin Magnussen and Mick Schumacher. But there was plenty of time for another lap or two as the track continued to dry up.

Just how much the conditions were changing was underscored by Magnussen then jumping to sixth place on his next lap, with Schumacher now tenth. It underlined that nothing could be taken for granted, as Leclerc shaved more time off his lap to set a new benchmark of 1:54.129s. No one felt secure enough to sit out the final seconds on pit lane, but neither were any of the teams tempted to try a Hail Mary move to slick tyres.

As Verstappen claimed the top spot ahead of a better run from Hamilton that left Leclerc in third, Tsunoda and Gasly improved into the top ten. All this meant that Esteban Ocon and Daniel Ricciardo were now in the drop zone. Schumacher was also in danger again but he had time for one last go that jumped him up to 14th, leaving Norris surviving on the bubble after the Haas' success spelled doom for Valtteri Bottas who joined Ricciardo, Ocon, Albon and Latifi consigned to the sidelines. 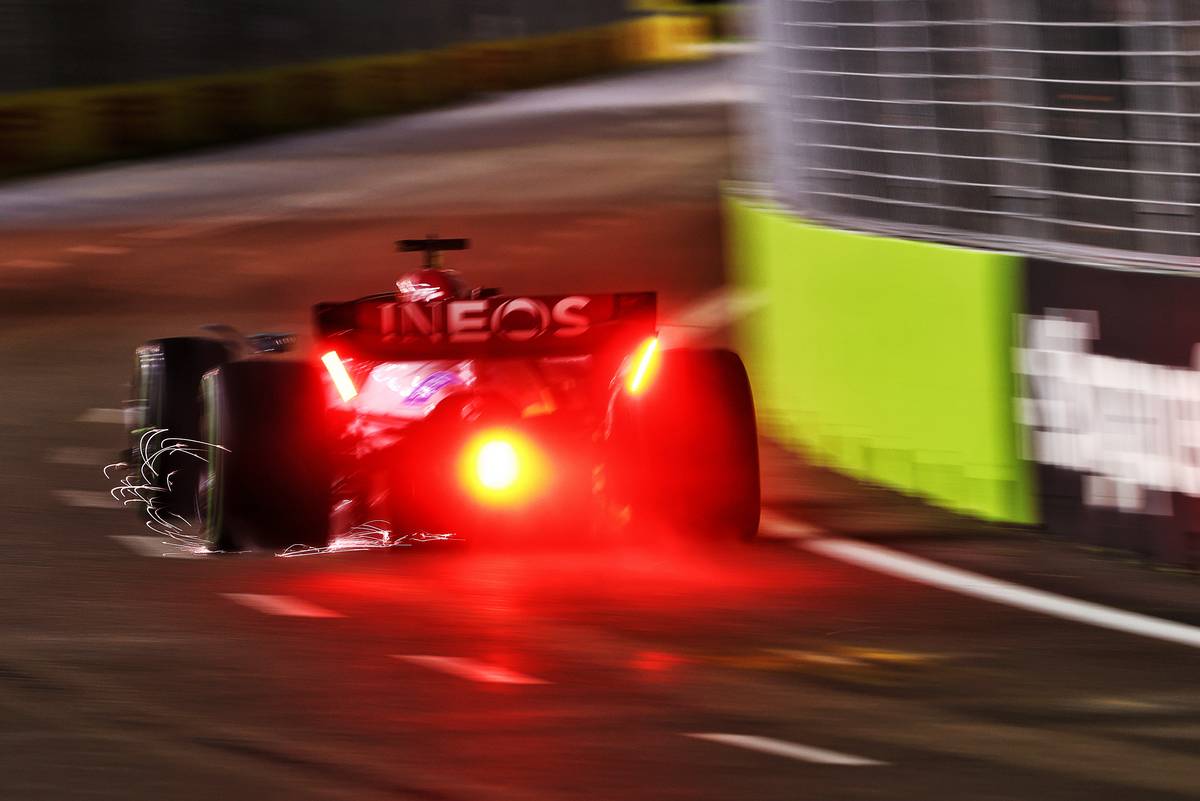 Q2: Leclerc and Hamilton quickest as Russell misses the cut, and slicks backfire on Aston Martin

There was a scramble as all the cars headed out the minute the lights at the end of pit lane went green, to safeguard against any interruptions. Gasly was first out, while Perez was the last to emerge. Everyone was still on intermediates, but some were on used sets while others were on fresh rubber. Leclerc was quick to report back that "it's drying up quickly," suggesting that it would not be long before the bravest drivers would be calling for slicks.

Norris was briefly top with a time of 1:53.995s which was quicker than Alonso, Gasly and Magnussen. But it was over a second and a half slower than Leclerc's run, with Hamilton slipping into second ahead of the Red Bulls of Verstappen and Perez showed up. Sainz had backed off on his first flying lap, and his next was only good enough for fourth - a second slower than his team mate.

Russell was flirting with danger in 14th and not helped by overshooting the entry to the weighbridge as he hustled to get back to his pit box for fresh inters in preparation for another run. Finally a team decided to go all-in on slicks, with Aston Martin drivers Lance Stroll and Sebastian Vettel pitting for the soft compound to use in their final outing, with all eyes in the paddock keenly watching on to see how they fared or whether it would all end in tears. For now, the only driver brave enough to pick up the gauntlet was Alfa Romeo's Zhou Guanyu.

The good news was that they all kept it on the circuit and away from the barrier; the bad news was that everyone put in scruffy, seat-of-the pants efforts in which they lacked grip leaving them significantly slower than they had managed on the inters. "Too early for dries," lamented Vettel. The gambit had failed, but top marks for trying. With drivers who had played safe sticking with the inters now improving into the top ten, Stroll, Vettel and Zhou were all squeezed out. Improvements by Gasly and Alonso then also demoted Russell into the drop zone by six thousandths of a second and there was no time for him to respond. It was the third time this year he hasn't made the top ten pole shoot-out. 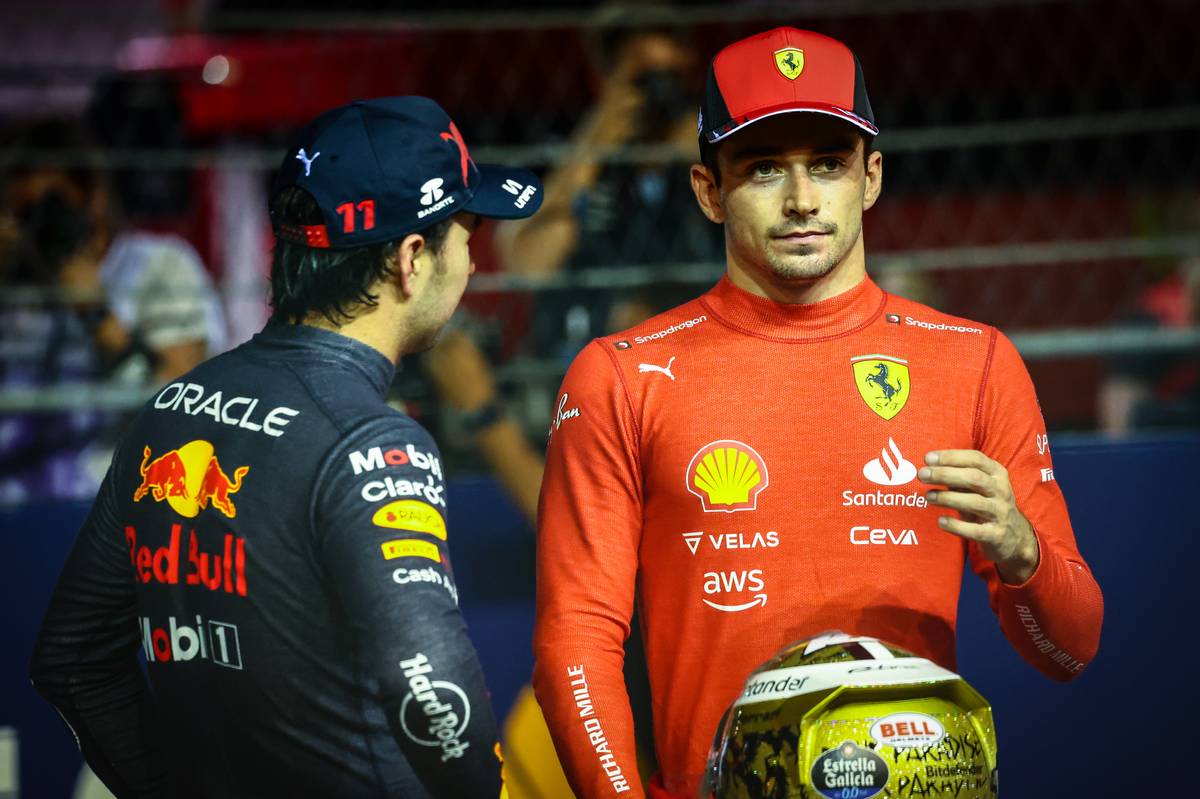 Now the question was how long it would take before everyone moved to the slicks. "It's right on the bubble," commented Christian Horner. The answer was not long in coming, with Verstappen opting to bolt on a set of soft tyres than triggered a rush of copycats down pit lane, Leclerc's coming at the very last minute as the Ferrari exited the garage. Ultimately only Tsunoda and Magnussen were left on the inters.

Verstappen set the first time of 1:56.940s despite a massive snap of oversteer on the way, but Tsunoda was then 1.770s quicker on the inters. It fell to Hamilton to show what the slicks could really do at this point, eclipsing the AlphaTauri by a whopping two seconds. Verstappen's second attempt moved him into second with Sainz going third, but Norris then went into second before Alonso and then Leclerc went quickest or all. Hamilton then completed his own second run and went to the top once again with a time of 1:51.019s, almost nine tenths ahead of Leclerc.

Verstappen pushed to the very limits of adhesion and came close to disaster in the final corners on his way to going second, albeit still 0.376s behind Hamilton. It showed there was still plenty more speed to extract from the drying circuit. Except for the pair who had started on inters, none of the drivers had time to pit for fresh tyres: it was a flat-out duel between the cars out on track as the clock ran out. 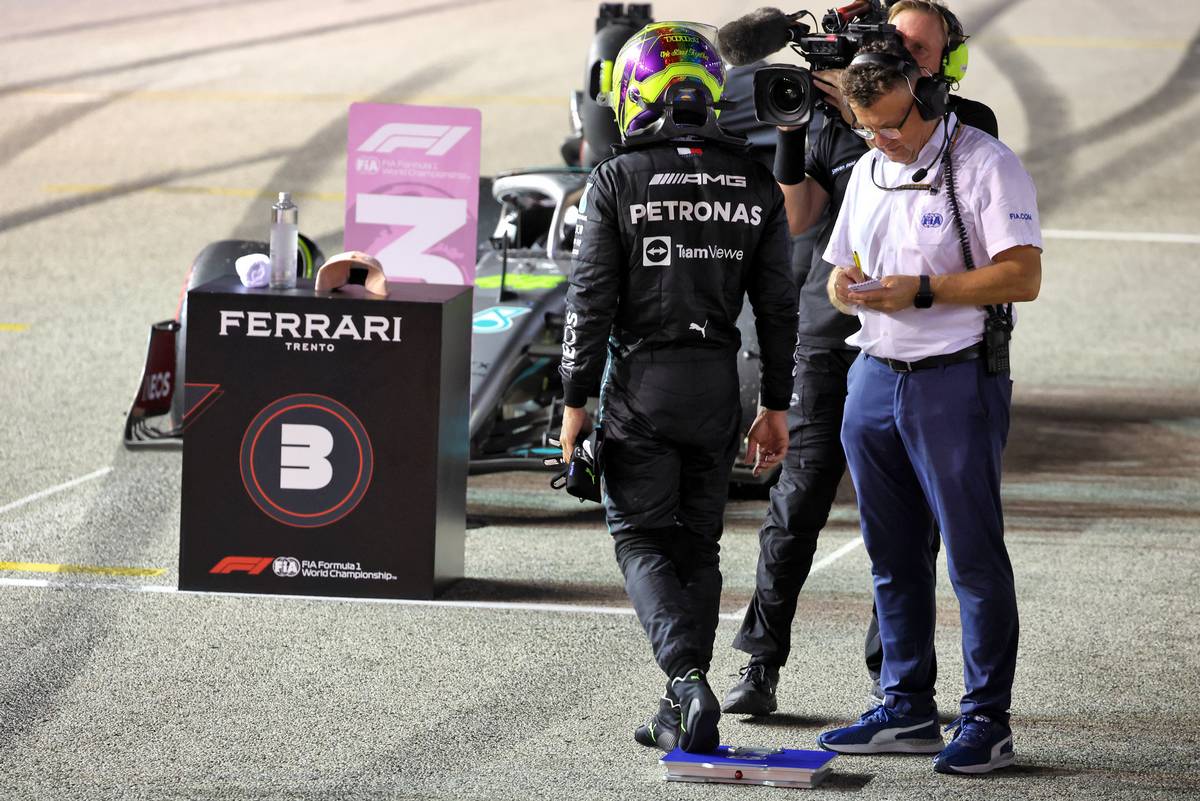 Leclerc improved to go to provisional pole with a time of 1:49.412s ahead of Sainz and a great lap from Fernando Alonso. Perez then split the two Ferraris for second, and Hamilton responded by going third leaving all eyes on Verstappen who was on a charge - until he unexpectedly pitted before completing his lap. It was at the express direction of the Red Bull pit wall, possibly due to a lack of fuel for post-session scrutineering. His team radio comments afterwards almost overwhelmed the bleep machine.

It handed Leclerc pole with Perez alongside him on the front row, followed by Hamilton and Sainz. Fernando Alonso was fifth, with Norris pulling out a strong sixth place despite having struggled all weekend. Gasly was left in seventh followed by Verstappen, who had been consigned to a disappointing eighth for tomorrow's start.