Mercedes boss Toto Wolff described the moment a marshal was still on track as the Singapore Grand Prix was restarted as "very dangerous".

The incident occurred following a short safety car period at the start of the race, with the safety car leading the cars through the pit lane once as Nico Hulkenberg's Force India was removed from the pit straight. With the race restarting at the end of the second lap, a marshal was still on track removing debris as Nico Rosberg led the field across the line at racing speed.

The marshal ran to the outside of the circuit and was able to get back behind the barrier but not before the field was already streaming past into Turn 1, and Wolff says the incident may have been caused by race control trying to restart the race as quickly as possible.

"Wow! Last year’s guy was drunk at least, but I don’t think this guy had such a good time out there!" Wolff joked, referencing a trespasser on track in 2015 which caused the safety car to be deployed.

"It was very dangerous. We must give credit to race control because they restarted the race very quickly, and this is what we have asked them – not to spend endless time behind the safety car, and that probably triggered that one of the marshals, meaning well, was out there cleaning up the mess. This seems to happen and I’m really happy it ended up with nobody being hurt."

Rosberg himself said both the drivers and marshal had been surprised how quickly the safety car was called back in.

“Yeah that was pretty hairy for sure," Rosberg said. "I think just as we didn’t expect the restart, he didn’t either, because the restart was somehow pretty abrupt. Luckily he got out of the way just about in time so it was OK, so of course we have to drive a bit carefully through there.” 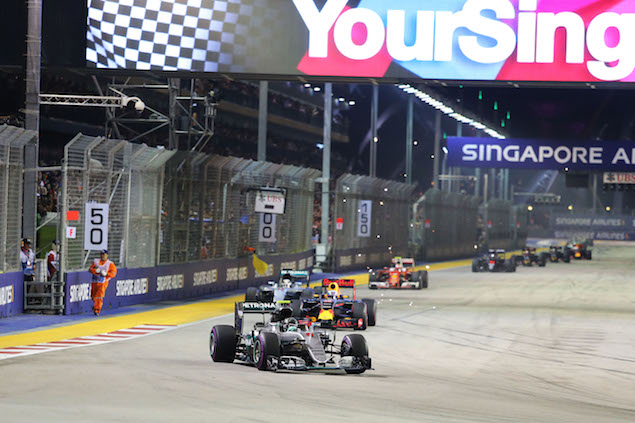 Silbermann says ... Not so sleepy in Singapore

'We were too conservative', says Kvyat