Christian Horner admits “it would have been difficult to challenge” Mercedes’ Lewis Hamilton at last Sunday's rain-hit Brazilian Grand Prix even if Red Bull had made the right tyre call.

The Milton Keynes-based outfit gambled on a switch to the intermediate compound only for the conditions to worsen at Interlagos.

This forced both Red Bull drivers to pit for a new set of extreme-weather tyres, which dropped them down the order.

Max Verstappen then showed tremendous speed to recover to third over the final segment of the race, but Horner thinks Hamilton, who led the race from start to finish, had the situation under control up front.

“It would have been difficult to challenge Lewis,” the Red Bull team principal said. “We managed to get into second place, but Lewis seemed to have the pace to cover us, so that is why we took a slight risk with the strategy to roll the dice, looking like hopefully the intermediate would come alive.

“It became apparent to us shortly afterwards as the rain very slightly increased, that we needed to abort that strategy, which was quite painful behind the Safety Car because you drop back a significant amount of positions.”

While Hamilton seemed out of reach, Nico Rosberg, who could not match his team-mate’s pace under the rain, admitted after the race that he had been relieved to see Red Bull pit Verstappen for inters, as it helped him secure second place at Interlagos. 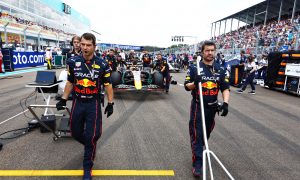