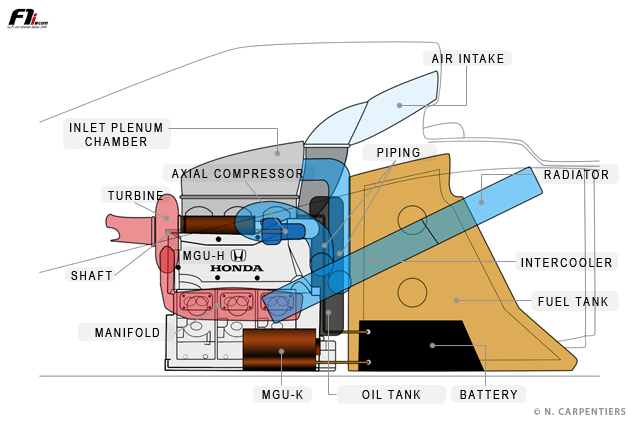 Balancing tradition and modernism has always been part of the Japanese mantra and way of life. But when it comes to motor racing, the Land of the Rising Sun has constantly embraced innovation at unabated speed. With high-technology etched in the country’s DNA, the Formula One circus has been quite eager to see what lies behind the new Honda hybrid power unit.

Poor reliability has been hampering McLaren’s progress from the onset, but many observers have always believed these teething problems were only the result of bold technical calls made by the Japanese manufacturer. So keen was Honda to catch up with their rivals that it started using pioneering technologies… before these had been thoroughly tried and tested. Mindful of the engine development scope reducing over the next seasons, the Sakura-based giant did not want to start its 2015 campaign with a conventional, but unspectacular, turbocharged V6 power unit.

Honda’s radical engine design also spawns – this might even be the No. 1 reason – from McLaren’s aggressive technical specifications and “size zero” MP4-30, the brainchild of aerodynamicist Peter Prodromou. Indeed, McLaren has insisted on giving maximum freedom to Adrian Newey’s former protégé at Red Bull.

“Having the engine, its ancillaries and the ERS impede on the car’s aerodynamic performance was simply not an option,” said McLaren racing director Eric Boullier. “The chassis has been designed to wrap up so compactly at the rear that we had to include all elements into a tight package with nothing sticking out. In order to achieve this, Honda actually had to make several attempts and come up with three versions of the power unit because the initial two did not meet the chassis/aero technical specifications. It took them a lot of effort.” 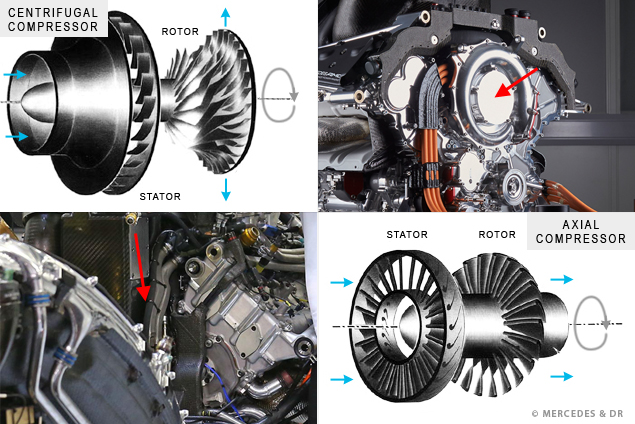 AN AXIAL COMPRESSOR FOR A RADICAL DESIGN

In order to declutter its PU installation, Honda has followed in the footsteps of Mercedes and split the compressor and the turbine, albeit in a different way compared to the current benchmark. As detailed by Autosport’s Craig Scarborough, the Japanese constructor has pushed the ‘minimal volume’ concept even further on its RA615H. The compressor has actually been placed within the Vee of the engine – in between the two cylinder banks – and alongside the MGU-H. A clever solution indeed, but how do you make it work?

Lodging a compressor in such a tight place has led the engineers at Sakura to opt for an axial compressor instead of a centrifugal rotor. What’s the difference? An axial compressor sees the airflow go through transversally, along the rotational axis. This allows the mechanical component to have an elongated shape, which in turn helps save space but does require a more twisted pipework system. On the other hand, the centrifugal design channels the airflow perpendicularly to its rotational axis, hence its bigger dimensions.

Although the axial compressor has a faster rotational speed – which improves engine and MGU-H operation –, it is harder to reach the same compression ratio as its centrifugal counterpart. Indeed, Article 5.1.6 of this year’s FIA technical regulations reads that “pressure charging may only be effected by the use of a sole single stage compressor linked to a sole single stage exhaust turbine by a shaft assembly parallel to the engine crankshaft”. However, this setback is partially offset by the 100kg/hr restriction on fuel flow (typical maximum boost pressure is around 3.5 bar abs in these conditions). Meanwhile, the turbine has a more conventional positioning, i.e. behind the engine.