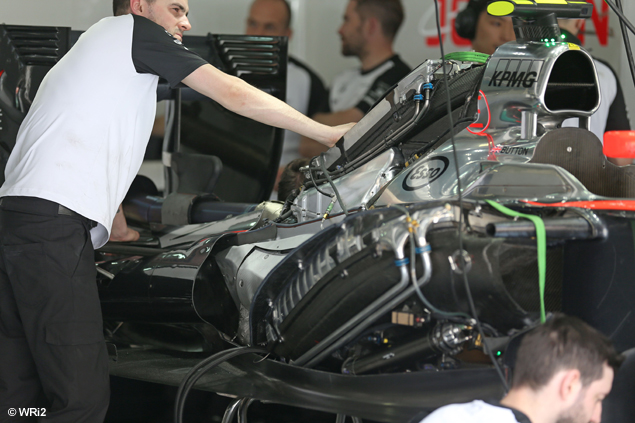 THE IMPORTANCE OF BEING COMPACT

As shown on the illustrations below, Honda’s V6 engine installation is quite close to Mercedes’ implementation, but there are definitely several differences.

First of all, the RA615H’s axial compressor allows a tighter overall package than on the PU106B Hybrid, which features a centrifugal rotor. As a result, the Japanese power unit needs very specific pipework. Another difference comes from the MGU-H’s cooling requirements since the motor generator sits in a tight space, i.e. within the Vee of the engine and alongside the axial compressor. In order to recover energy from the exhaust, Honda has elected to go for the log manifold design… which was one of the key features on last year’s Mercedes PU106A! For this season, the German behemoth has decided to switch to a more conventional manifold design. Theoretically, the shorter log manifold solution enables constructors to have a tighter package as well as allowing for more energy to be fed towards the turbine.

However, there are also similarities between the Honda hybrid unit and the Mercedes power plant. The split turbo installation benefits cooling since the compressor and the associated ducts are placed in front of the engine, namely far from the 900°C heat released by the turbine and the red-hot exhausts. With the compressed air needing less cooling, the whole assembly enables teams to use a smaller intercooler (compared for instance to the Renault Energy F1-2015 where the compressor and turbine are implemented together). 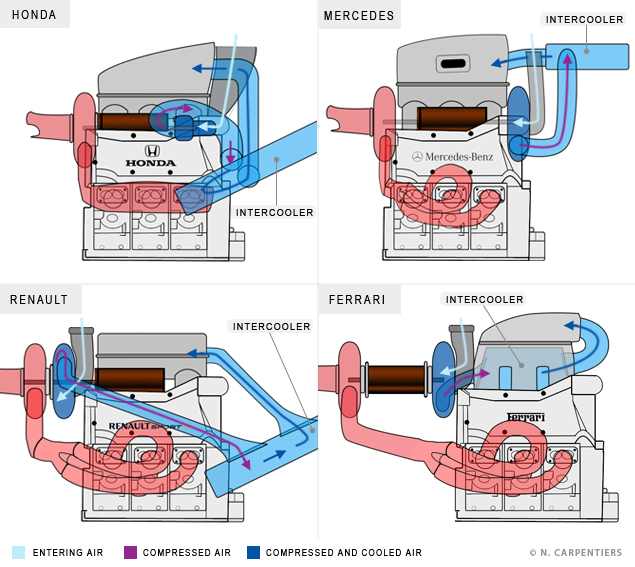 Speaking of intercooler, Mercedes, Honda, and Ferrari all have a different installations on their respective power unit. The W06 Hybrid’s intercooler has a central positioning and is lodged directly within the monocoque, while the Honda-powered MP4-30 has a more traditional design with the intercooler placed in the car’s right sidepod. On the Ferrari power unit*, the same component sits within the two cylinder banks in order to limit airflow resistance in the sidepods.

Another advantage of Mercedes’ and Honda’s split installation is the shorter pipework between the compressor and the intercooler. Therefore, the compressed air needs less time and less energy to circulate, which in turn helps reduce the turbo lag phenomenon. This also means that a greater part of the energy recovered by the ERS can be used for the actual boost, as the MGU-H feeds less energy towards the turbine when the driver is not on the throttle.

*This year’s Ferrari 059/4 has still its turbocharger placed at the back of the engine (just like Renault’s Energy F1-2015) and its slightly revised intercooler within the two rows of cylinders. However, it remains unclear whether the MGU-H still sits in between the compressor and the turbine.