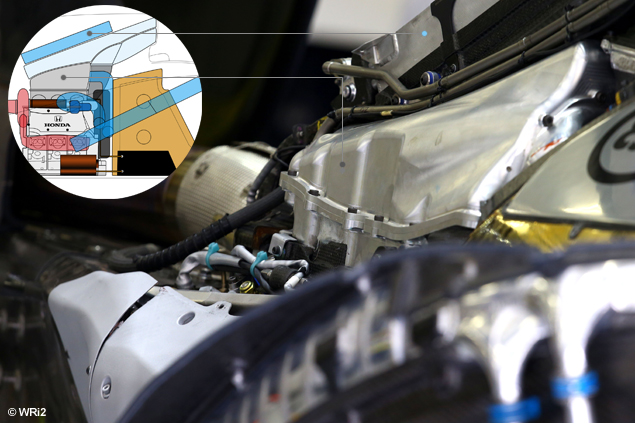 NOVELTIES ACROSS THE BOARD

Above the V6 engine, the car’s air intake is split into a pair of ducts. The first duct feeds cooling air to a big radiator – actually an ERS cooler – that is attached directly to it. Hot air coming off this element then flows along the curve of the engine cover, down towards an oversized flared vent at the rear.

The second duct is more conventional and feeds air to the internal combustion engine via the compressor and the inlet plenum chamber. The latter is made of aluminium and sits quite low, as the inlet variable trumpets are oriented at 90 degrees and thus direct the cooling air perpendicularly towards the cylinders.

Once Honda gets on top of its current reliability woes, there is no doubt McLaren will be able to make the most of its “zero size” MP4-30. But the clock is ticking...

Another originality is the single unit that fits the battery as well as the control electronic boxes of both MGUs (see below). This compact design most certainly frees up space beneath the oil tank and helps have a tighter overall package, but it also makes cooling quite tricky.

And with both motor-generator units absolutely requiring water or oil cooling, Honda has so far been forced to downtune its power unit in order to avoid any overheating issues or any leaks in the cooling system because of faulty seals. The MGU-K and oil tank have a more conventional positioning, respectively in front of the engine and beneath the left cylinder bank.

Once Honda gets on top of its current reliability woes, there is no doubt McLaren will be able to make the most of its “zero size” MP4-30. Meanwhile, the renewed alliance will need to show gaman (resilience in Japanese) and bide its time. “Fall seven times, stand up eight” says a popular proverb in the Land of the Rising Sun. 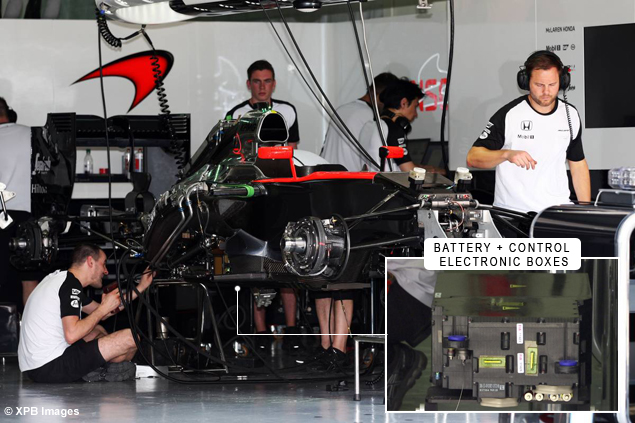 NB: All the drawings in this feature have been made with a view to offering informative comparisons to the readers. Therefore, these are simplified, easy-to-digest illustrations of the complex F1 power units.