Lewis Hamilton's promotion of F1 outside of the sport may have brought praise from Bernie Ecclestone over the past few years, but Sebastian Vettel stepped up his game in 2015.

Not only was he the nearest challenger to Mercedes on the track, Vettel provided plenty of entertainment off it as he brought humour to the paddock and often trying to light the spark between Hamilton and Nico Rosberg.

Here, F1i brings you some of Vettel's off-track highlights as he started the year by blagging his way in to the Mercedes garage... 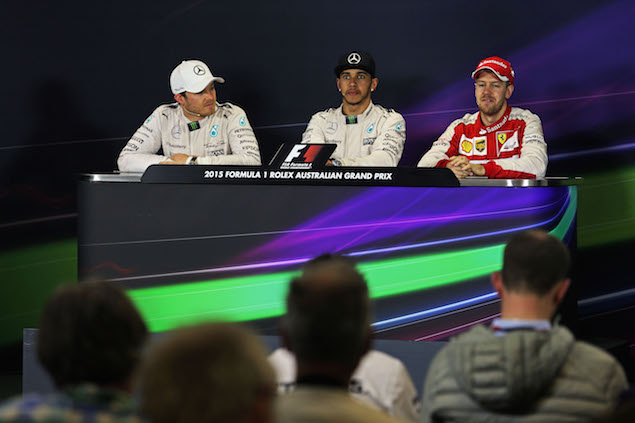 NR: “I hope we can have a good fight. That would be awesome. I think the next couple of races we’re going to be leading the way for sure, and we’re going to try and keep it that way, but we know it would be good if they can come a bit closer, as long as they don’t come too close…”

SV: “Be honest. Do you really hope so? Seriously? You finished 30 seconds ahead of us and you hope it’s going to be closer? So you hope you slow down? Is that what you’re saying?”

NR: “I hope that you can give us a challenge! Because it’s important for the sport and for the fans. And I do think about the show. Half of me – or a part of me – thinks about the show because I want to give people a great time at home watching on TV or at the track. If you do come a bit closer, that would be awesome for everybody.”

SV: “First suggestion, if you don’t mind, I think your garage becomes public for Malaysia and everyone can have a look. No? I’m joking.”

NR: “You can come if you want, we can invite you…”