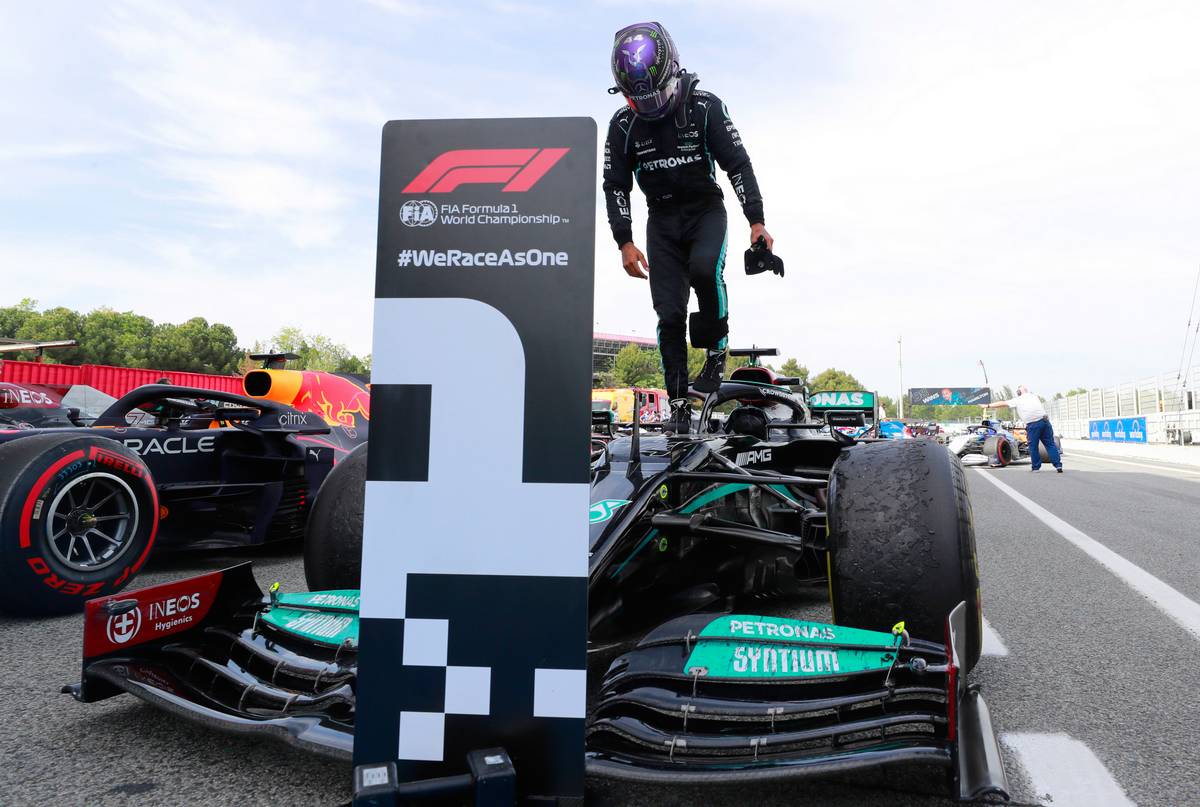 Valtteri Bottas
"Losing that position to Charles at Turn 3 on the first lap compromised the first stint of my race. I was hoping for more today but that made it difficult. My overall pace wasn't too bad - bit of a shame that we couldn't finish higher, but at least I managed to get on the podium. I'm never happy to settle for third, I'm here to win but it was a good day for the team, scoring more solid points. Monaco is going to be a unique challenge in two weeks' time and I'm looking forward to it."

Lewis Hamilton
"What a day! It was a remarkable job by the whole team again this weekend and it's so good to see fans back here. I even saw a few British flags in the crowd and I've really missed that! I feel great, like I could do that all over again, all the training is clearly paying off!

"It was really close off the start, there was a lot of rubber down on the righthand side of the grid and Max got a really good start. I then went hunting and was so close to Max for so long during the opening stages of the race, and I was worried I wouldn't be able to make the tyres last in the dirty air. It looked like a long way back after the second stop - it was something like 20 seconds off Max - but it was a really bold call by the team. I was really conflicted, it felt like I might have the shot to make the move before Max stopped, but we just have that trust between us in the team and it was a great call."

Toto Wolff, head of Mercedes-Benz motorsport
"I think we had a quick car, but when you lose position on the first lap it puts you on the back foot. It was difficult for Red Bull as the car in front to make the right decision on strategy, being in second it's easier if you have the gap to make the call that we did today.

"When you look at qualifying, there were three cars within a tenth, you never know who's going to be in front. I hope it's going to remain like this till the end of the season - it's just what the sport needs and we're enjoying this fight.

"Today was brilliant work from the team back home, it was our Head of Race Strategy, Rosie's, last race before going on maternity leave and I'm so proud. It was a bold move, and when you see the gap open up to more than 20 seconds, you think there's no way you'll catch up. We saw Max's tyres suffered more than ours, and we were able to stay close. The planner actually showed we'd catch Max with one lap to go but we got there with four!

"The guys and girls in the team are doing a really good job, even on the days we lose, we learn and the mindset is right. When our car is not quick enough, we are still able to extrapolate good performances. We we never rest, never have any sense of entitlement - in two weeks it can swing in the other direction and then it will be a weekend to learn. The atmosphere was fantastic and I really need to take my hat off from the group of strategists led by James and all the group back in Brackley, they are just fantastic."

Andrew Shovlin, chief race engineer
"Congratulations to Lewis on another well-deserved win! A good day's work by the team and drivers but it felt like a lot of effort to get back to where we started. Both drivers dropped positions off the line; we didn't have a particular issue on Lewis's side, he just lost a bit in clear air and ended up on the left where you can get pushed wide. Valtteri got a bit boxed in with Lewis going into turn 3 and lost to Leclerc on the outside. We knew overtaking on-track was going to be a long shot on the same age tyres but at least we could sit close enough to Max to force him in early and with Valtteri, to go for the undercut on Charles.

"Going into the race, we thought a one-stop would be much easier to complete than it turned out to be but I don't think we were alone going in with that mindset. That's largely down to the short sessions, with less time to do our homework but at least the scene was set for the alternative strategy to take the win as many cars were dropping off at the end.

"Our pace has been pretty solid this weekend, although we still seem to be relatively better on the long runs than the single lap and in Monaco, it's mainly about single lap performance. That's always a challenging weekend to get right but it's a great race and we're looking forward to going back there after the gap in 2020."