After its delayed launch, F1i technical expert Nicolas Carpentiers takes a closer look at the Sauber C35, which includes the latest specification of the Ferrari power unit and its revamped cooling system. 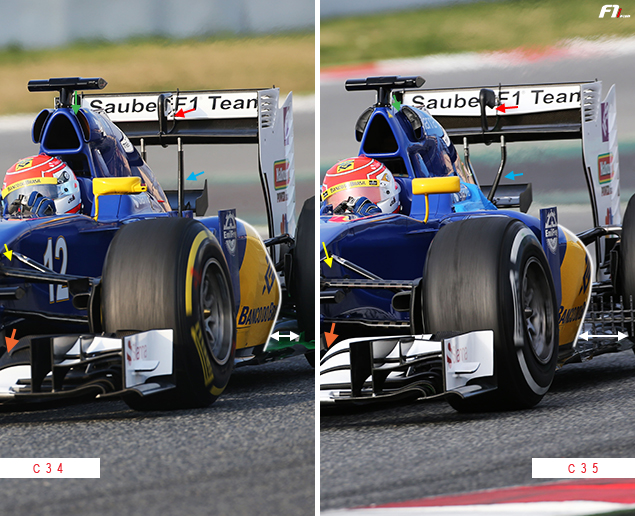 Sauber technical director Mark Smith only arrived in July 2015 so his input on the C35 has been limited, with Hinwil’s latest challenger mainly an evolution of its predecessor. That said, the C35 is a more compact package especially around the sidepods, which have been undercut in their lower part and wrap up more snugly at the back. If the McLaren-Honda MP4-31 and Toro Rosso STR11 remain the flagship ‘size zero’ cars on the grid, the Sauber’s slimmer rear end helps accelerate the airflow in the ‘coke bottle’ area while the tighter bodywork also makes the diffuser work more efficiently.

The front wing is identical to the version introduced at the 2015 Singapore Grand Prix save for the upper flap, which is split into two elements on the outboard section (see orange arrows above as well as on the next page). According to Smith, the new-for-2016 front wing specification will not be introduced until the second third of the season, but not later given the fact that Sauber’s limited resources will force the Swiss outfit to switch focus towards 2017 and the technical revolution looming ahead fairly soon.

Like Williams, McLaren and Manor, Sauber has elected not to go for the lower conjoint Y-shaped wishbone setup that was first introduced by Mercedes in 2014. Since then, Ferrari, Red Bull, Force India, Toro Rosso, and Haas have all adopted the design.