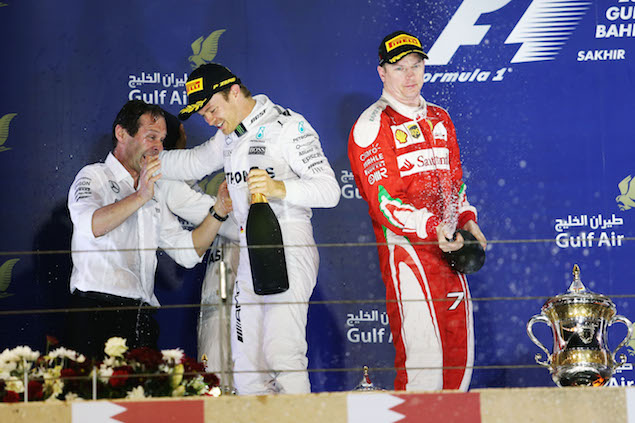 Sebastian Vettel
“It was a very short race today, I didn’t even break a drop of sweat…We had a failure, I saw a lot of smoke from behind and I lost power so we decided to stop the car. For sure it is frustrating, because in the end I am here to race. The problem came as a surprise, both for me and the whole team, as I was approaching Turn Eleven. Now we need to understand exactly the problem and learn from it. It is not ideal and we can’t be proud of it. But we had a good preparation over the winter, we are pushing very hard and we know that we can still improve. We still have a lot of races ahead of us, this is going to be a long year so even if today it was not good because I couldn’t score any point, we’ll make sure that the next race goes a lot better… Congratulations to Kimi. It was important that during the race we supported him on both sides of the garage.”

Kimi Raikkonen
“The start was not ideal, but luckily we did not lose too many places in the first lap. After that I tried to recover, and was able to overtake some cars and make the best out of it. We managed to do good pit-stops with the right tire choices and the speed was quite good, too. In the end we were catching up a bit on the Mercedes in front, but I never got close enough to try and pass Nico. Considering what happened in the first lap it’s a pretty ok result, it’s not what we want but we keep working and improving things. We are going in the right direction, but obviously it’s not ideal for the team to have only one car finishing the race. In this sport we always push to the limits and sometimes things can go wrong, this is not what we want but it’s part of racing. We know that the car is pretty good but we have certain things to improve and still some work to be done.”