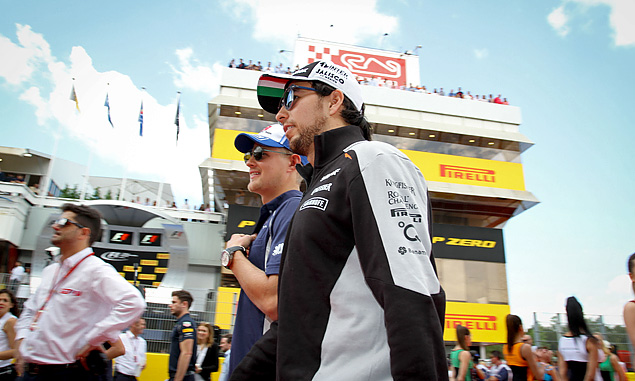 Nico Hulkenberg
"It’s frustrating not to finish another race. I saw some smoke coming from the back of my car and then it developed into a fire so I had to park quickly at the side of the track. It’s a shame because I missed the chance to fight for points and we also missed out on learning more about the car in race conditions. Sometimes in racing you have periods when things don’t go your way, but you have to keep the faith and believe that sooner or later your luck will change. There are also some positives to take away from this weekend because we’ve made progress with the car and I think the performance will continue to improve. So we will keep working hard and come back stronger at the next one."

Sergio Perez
"It was a very good race and I think we managed to get the maximum result we could hope to achieve today. We were able to keep some very fast cars behind us and we capitalised on the accident on the first lap [between Hamilton and Rosberg] to bring home a good amount of points. I had to fend off Felipe [Massa] in the last three laps: I was on very old tyres and he was closing in on me, but I managed to defend my position. This was pretty much the only action I had all afternoon; the rest of my race was quite lonely, which helped me look after the tyres and allowed me to defend in the final few laps. We had a good strategy that helped us leapfrog the Haas and brought us this good result on a track that has never been our strongest."

Robert Fernley, Deputy Team Principal
"It’s been quite an eventful weekend for us, so it’s fairly satisfying to be leaving Barcelona with six points in our pocket. We made a good step with the car, allowing Sergio to run solidly inside the top ten all afternoon. It’s a track with limited strategy options and few overtaking opportunities so it was quite a lonely and straightforward race for him. On the other side of the garage, Nico was out of luck with an oil leak causing a fire and forcing an early retirement. Thankfully Nico was able to park up and helped the marshals extinguish the fire. So it’s been another mixed weekend, but I think our improved performance bodes well for the remainder of the season. As we learn more about this car we have the potential to continue scoring good points at the upcoming races."