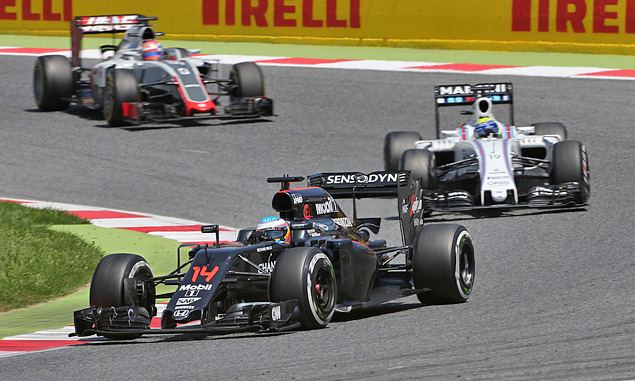 Fernando Alonso
"My car felt okay this afternoon, but I didn’t manage to make a good start and lost everything – so my race was effectively over by the first corner.

“After that, I followed Jenson for 50 laps and had traffic all race long, so I wasn’t able to do too many laps in free air or show my true pace.

"At the end, I lost power somehow – we don’t know the exact cause.

“We weren’t able to capitalise on our reasonable level of competitiveness. With both Mercedes out, we had a good opportunity to score some points today, but we didn’t manage it, so we need to keep improving."

Jenson Button
"“It’s a shame that Fernando retired, because we were having a good battle out there.

"I had a great start – it must’ve been the best getaway out there!

"But it wasn’t a very easy race for me. There was no grip at all out there – and, whatever we did, we struggled. But, equally, the leaders weren’t very quick at the end, which made it really difficult for me to manage the situation because Dany [Kvyat] was right behind Seb [Vettel] and Ricci Bobby [Daniel Ricciardo], and he was on fresh rubber. Fortunately, I was just quick enough to stay ahead of those cars, and he couldn’t jump me.

"We knew it was going to be difficult to score points here, so this result wasn’t too bad."

Eric Boullier, racing director
"Such was the drama of today’s Spanish Grand Prix that few spectators or TV viewers will probably have paid much attention to Jenson’s calm and well-judged run to ninth place – another points-scoring result following immediately after our double-points-scoring success in Sochi two weeks ago.

"Disappointingly for the local fans, Fernando was unable to score points today, owing to a software command issue that stopped the ICE. Until that moment he’d been driving hard and well, and, but for the problem that ended his race, may well have also finished inside the top 10.

"However, as I’ve said before, mere points aren’t what we at McLaren-Honda are all about – podiums, wins and championships are what float our boat, and undoubtedly they’ll come. I’ll make no predictions about the next race, the unique challenge that is the Monaco Grand Prix, but you may rest assured that we’ll be gunning for a decent result on the notoriously unforgiving streets of the famous Principality.

"Last but not least, I want to take this opportunity to congratulate young Max [Verstappen], who today became the youngest Grand Prix winner in Formula 1 history, a record held for the past eight years by Sebastian, for the five years before that by Fernando, and for no fewer than 44 years before that by the founder of our company, the great Bruce McLaren."

Yusuke Hasegawa, Honda R&D head of F1 project
"It was a bittersweet end to an eventful Spanish Grand Prix. Fernando’s retirement was caused by a software command issue that stopped the ICE. We think that the power unit as a whole is not damaged from this incident, but we will continue to investigate the effects of this stop. Obviously we will work with the team to see how this kind of situation can be avoided in the races going forward.

"Jenson started brilliantly, but, on the whole, it was a long and difficult race for him, trying to save tyres while fending off the competition and maintaining position. Therefore, it was a pleasure to see him finish in the points after a difficult weekend."