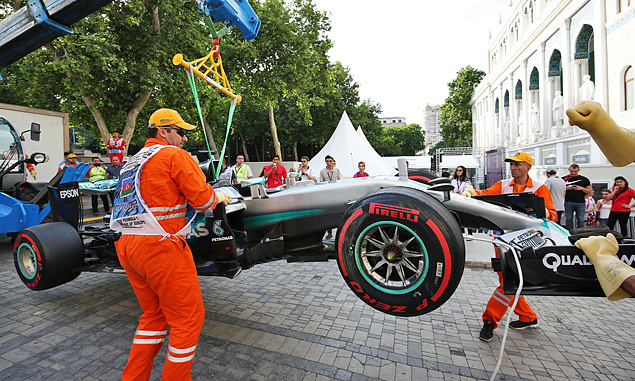 Lewis Hamilton
"It's a fine line between being on it and not being on it - and I just wasn't on it today. I had a fantastic rhythm yesterday but none whatsoever today. There's no specific answer or excuse. I wasn't hitting the right apexes or the right braking zones... it was just one of those sessions. Sometimes it happens. It was my fault, so I'll apologise to the team and try to make up for it tomorrow. It's always difficult to come back from this kind of position so it'll be damage limitation tomorrow. I highly doubt I can challenge for the win - but I'll give it my best shot and try to bring home as many points as I can. The car is good here and we've got more pace than most of the others. I've just got to make my way through any tangles at the first corner and see where I go from there."

Nico Rosberg
"That was a very exciting Qualifying session today. In Q3, Lewis went down the escape road in front of me on his first run, so I had to back down and abort that lap. I therefore only had one quick lap at the end - but I got it all together and felt pretty confident that it was enough to get pole after I heard that Lewis was out. It's a great feeling to start from P1 as I have the best chance for tomorrow. It's a very demanding track here and you are not allowed to make a single mistake, so it will be a long race with a lot of things going on. It's definitely a good track for overtaking and there will be Safety Car moments for sure as we have seen in GP2, so I must be prepared for that. I expect a fast comeback from Lewis even though he's starting P10, as we have seen recently that he's finished P2 even coming from the back. It's going to be an exciting race to watch. I'm looking forward to it."

Toto Wolff, Head of Mercedes-Benz Motorsport
"Really mixed feelings after a session like that. A great, clean pole for Nico - but it just wasn't Lewis' day today and he'll start from P10. We saw yesterday and this morning that the car has a good pace advantage here, so we were aiming for the front row with both of them. But this is a tricky kind of street circuit where it's not easy to get a lap together, as we saw from the number of yellow flags throughout the day. It's always a very marginal thing to go to the edge but not cross over. Nico did a really strong job through all three sessions, setting fastest times in each of them. But Lewis struggled to find his rhythm and it ended with his right front touching the wall in Turn 11 on his final lap, which broke the suspension. Nico starts the race from the best position possible and all is not lost for Lewis. There's lots of opportunity out there if you survive the first lap and this should be one of the easier circuits for making up ground thanks to the long straight. I think we have a pretty exciting race in store tomorrow - and we'll be racing to get both boys to the podium."

Paddy Lowe, executive director (technical)
"Quite a messy session, overall. We got through Q1 in reasonable shape but from Q2 onwards it wasn't quite as straightforward. Lewis encountered yellow flags on his first Q2 run, then locked up and ran deep at Turn Eight on his second. This left him with plenty to do on tyres which were in far from optimal condition for his final attempt but he made it through. In Q3 we opted to put both drivers on a single, four lap run, theoretically giving them two attempts at a flying lap. Nico did a great job to take pole with a strong effort - but an uncharacteristically messy session for Lewis unfortunately ended in contact with the wall. The car is clearly very quick here, so we're disappointed not to have locked out the front row. But the potential to have both drivers on the podium is still there. We've seen from the GP2 race earlier today that overtaking along the start / finish straight can be an interesting prospect, so it's all still to play for on both sides. However, we also saw five cars go out at the first corner in that race, so negotiating that obstacle will be the first priority. It should be an exciting race."