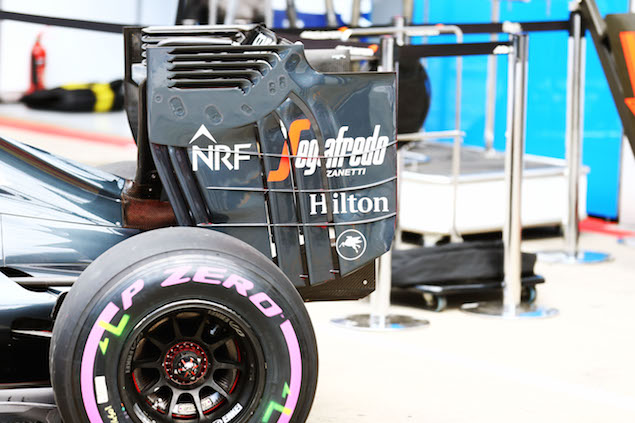 Fernando Alonso
“I quite like the new track surface – it’s very smooth and there are no bumps. We were also able to exploit the grip, which was quite good. This afternoon, we had the opportunity to run on the track after the rain – it only took 30 minutes for the circuit to dry out enough for us to fit dry-weather tyres.

“I think we need to be ready and focused for any opportunity if it rains on Sunday like it did this afternoon – we should try and take advantage of that.”

Jenson Button
“Even with the new asphalt, the camber changes in the corners make it tricky to drive around here. Plus, there are a lot of big, wide kerbs that you can use, but they wear the floor, which makes it difficult for everyone.

“We use all three different types of dry-weather compound today – and I still think it’s a bit up-in-the-air about which tyres will be best in the race. Then, on the Inters, we were one of the quickest cars, which was a positive.

“There are a lot of fast cars out there, so it’ll be tough for us to get into Q3 tomorrow, but there’s rain forecast for the rest of the weekend, which should give us some useful opportunities.”

Eric Boullier, racing director
“A tricky day for the team as we juggled our programme to adapt to the changing weather conditions. This afternoon’s mid-session shower was quite incredible in its suddenness and sheer intensity, but, happily, it quickly dried out and we were able to get some running under our belts before the end of FP2.

“Nonetheless, the wet conditions robbed us of the opportunity to gather as much useful long-run data as we’d normally like, so there’s still a bit more work to do tomorrow – weather permitting – to best prepare us for qualifying.

“The morning’s session was spent undertaking a number of aero tests as we work to introduce new components. Both drivers were satisfied with the car’s balance, despite the lack of running, but we still need to make some improvements if we’re to challenge for Q3 tomorrow and points in Sunday’s race.”

Yusuke Hasegawa, Honda R&D head of F1 project
“Today as a whole became a busy Friday for the team due to the sudden rain in FP2. From a power unit point of view, we have carried over almost all components from the European GP, so we focused on our set-up for the weekend as well as support the team's run plans.

"Last year, we were hampered by lack of deployment on the final straight and the steep inclines of Turns One and Two, but I am happy to say that our new turbo's upgrades have been working well this weekend.

"The weather forecast still shows instability and rain for the weekend, so we hope to be prepared for whatever nature throws at us."