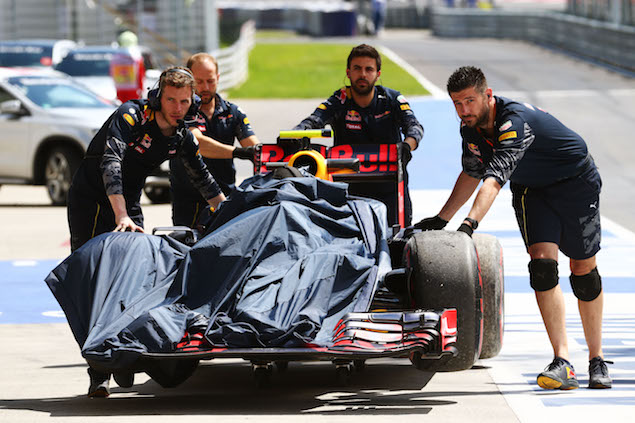 Daniel Ricciardo
“I think we’ve had a pretty good day and didn’t fight the car too much today. This morning we got up to speed pretty quickly, which was important. Then this afternoon was crazy. The level of rain was really high during the session, but it was actually good to experience two different conditions. The rain was so local and came in really hard at Turn 8 and 9 so that part of the track was especially tricky. If in the race you get that part of the track first before the others then you could be quite unlucky. It’s been a track where we struggled a bit in the past, but I felt pretty comfortable from lap one so I think we are more or less there and won’t be here until midnight tonight trying to find a set up. We are pretty close to where we need to be so that’s a good start. If it rains tomorrow then anything is possible. It’ll be very interesting.”

Max Verstappen
“The first session today was a bit shorter than I would have liked, so we lost a bit of time there and also at the beginning of the second session. The car wasn’t quite ready due to the damage we suffered in the first session so that put us on the back foot a bit. We would have liked to run more but I’m pretty happy heading into Saturday with the laps I did, it wasn’t too bad. I actually didn’t expect to be that close so I’m quite happy. The kerbs are pretty high and can cause damage as we saw, but it’s up to us to stay off them and respect the track limits. I didn’t know they would be so hard on the car, perhaps one longer kerb instead of lots of smaller ones would be better. Looking ahead at the weather for the rest of the weekend I hope it rains because our car is really good in the wet, so let’s see what happens in qualifying.”