Catch up with what all the teams had to say following the 13th race of the 2016 season - the Belgian Grand Prix in Spa-Francorchamps. 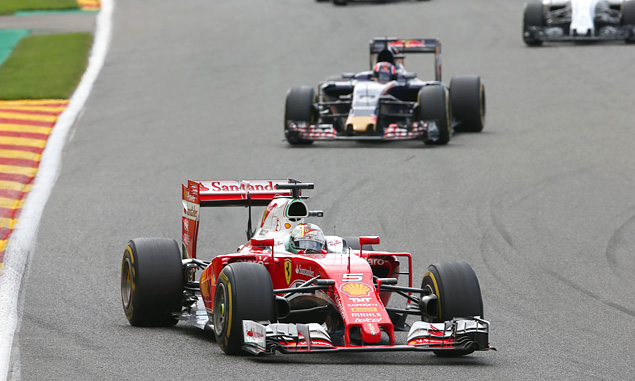 Sebastian Vettel
"Today I had a brillant start. I was in second place and half a car ahead, so I could dictate the way. I could hardly see Kimi, he was in my blind spot, with Max even further right and out of sight. So I don’t think what Max was trying to do would have worked. Obviously he didn’t allow Kimi to move into the inside, and that prevented both of them from clearing Turn One in a normal way. We all three touched and collided, and this was bad news for Kimi and for me. Of course, with hindsight, I would have given more room to the inside, but you want to make the corner and try to race, and I gave room to Kimi, but not to three cars. Max had a bad start, he was falling behind. I think we have seen in the last couple of years that if you really dive down the very inside,the track is falling off and you basically go straight. The cars ahead have priority, and this is something he needs to understand. In that regard there was no way he could have made the corner without making contact. I don’t think that me and Kimi have to change what we are doing, we respect each other and it’s a pity when two cars of the same color collide."

Kimi Raikkonen
"After the start, at the first corner, Sebastian didn’t see that there was another car on the inside: he expected me to turn but I couldn’t, so I found myself stuck in the middle with nowhere to go. We ended up touching each other and this was pretty bad for the rest of the race. After that it was an uphill battle: the floor of my car was a bit damaged, but we managed to recover some positions and do the best we could, even though it was not easy. I’m fine with fair racing and close battles, but, in my opinion, what happened at Eau Rouge with Verstappen was not correct. I was going full speed and I had to back off before Turn 5 because he just turned in front of me when I tried to overtake him. I’ve never had that with any other driver, if I hadn’t braked hard I would have hit him at full speed and it would have ended up in a massive accident. It’s hard to say where we would have been without the issue at the first corner, but the car felt well throughout the weekend. This was not the result that we were looking for, it’s a pity but that’s how racing goes sometimes."

Maurizio Arrivabene, team principal
"It’s such a pity. Today we probably had the pace for finishing the Grand Prix with both drivers on the podium. Unfortunately, the accident at the first corner ruined our race. The positives we can take is that, despite extensive damage, our car proved fast and resilient throughout. And this bodes well for our home Grand Prix next week at Monza. Also, the team behaved strongly and was united both on track and back at Maranello. So, starting from tomorrow, we’ll start preparing the Italian Grand Prix."