F1i’s Nicolas Carpentiers reviews the technical novelties from last weekend at Monza, a high-speed venue where a few intriguing front and rear wings were spotted… 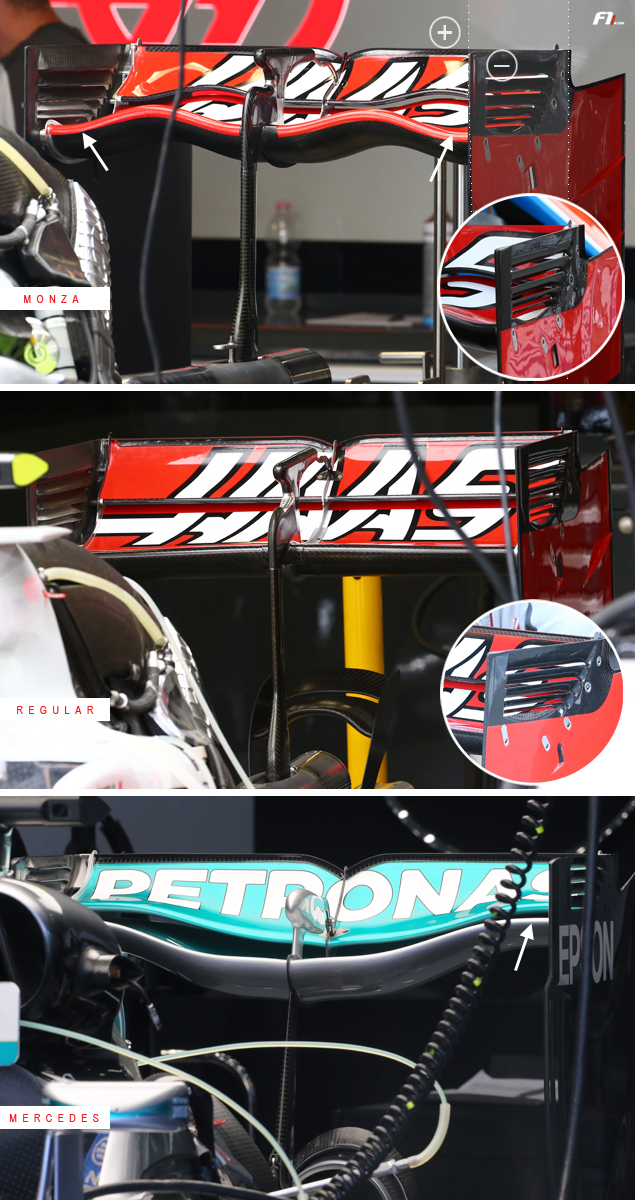 HAAS RIDING THE CREST OF THE MERCEDES WAVE

The Haas VF-16 certainly caught the eye at the Italian Grand Prix with its curvy rear wing. Its ‘M’ shape means there are a couple of hollows in the main plane, which ends up looking like a wave as a result. The overall concept is identical to the similar design seen at Mercedes: to reduce the main plane’s angle of incidence in crucial areas, while keeping a higher angle elsewhere. However, the implementation of said concept is very different between the two teams.

The Mercedes wing aims at reducing the car’s aerodynamic drag by refining the outer sections of the main element (see white arrows), where vortices are created.

Consequently, the rear wing endplate has lost a slit, since there is a lesser pressure differential on both sides of said endplate. As a reminder, the endplate slits are used to equalise air pressure, which in turn helps curb the vortices created in the area where the main plane and endplate meet. With Monza wings featuring a lower angle of attack, the slits can be removed.

On the other hand, the Haas solution has the outer sections of the wing dipping instead of going upwards (compare white arrows). With this design theoretically increasing drag, why did the US team go for it?

Actually, as spotted by Autosport’s Craig Scarborough, maintaining the four endplate slits offsets the pressure differential that usually generates drag. Instead of refining the outer edges of the wing and removing the slits, the team has kept a fairly sloped wing along with the slits.

This hybrid approach could be motivated by economic reasons, as it reduces drag but without changing the endplates – Sauber has been proceeding as such since last year. Unsurprisingly, Haas factored in the lower downforce produced by its ‘wavy’ wing to adjust the front wing and ensure optimum aero balance on the VF-16.

Instead of manufacturing a bespoke Monza wing, several teams (Mercedes, Ferrari, McLaren, Force India, Toro Rosso) went for the low drag option they had already pulled out for Baku and Spa. This was probably done in a bid to help tyre management in the light of Pirelli’s high tyre pressures, though the official F1 supplier eventually decided to reduce its limits ahead of qualifying.

A low-downforce rear wing reduces the car’s aerodynamic drag (i.e. its resistance to airflow) and thus results in an increase in straight-line speed, always a key performance factor at the fabled Italian GP venue.

Why Bernie staying could mean more chance of change in F1