Eric Silbermann has decided he'd rather be in Buckinghamshire than Brazil, as he misses his first grand prix by choice since the start of the 1987 season 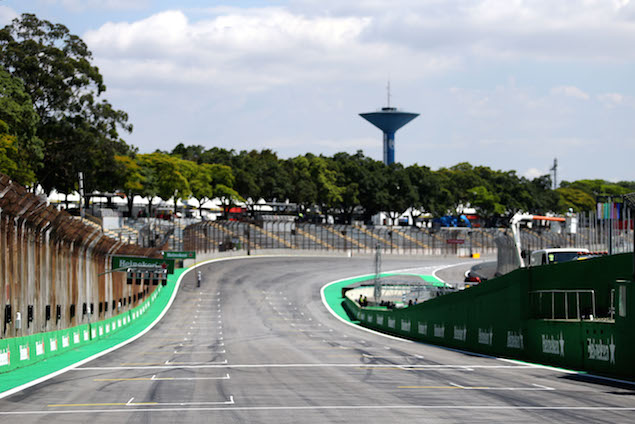 The brilliant comedian and satirist Peter Cook was once asked to attend a dinner party where the guests of honour were British royalty Prince Andrew and his then bride-to-be and regular F1-goer Sarah Ferguson. “Hang on, I’ll just check my diary,” Cook replied. “Oh dear, I find I’m watching television that night.”

I thought of Mr. Cook at the time the 2016 F1 calendar came out when, on cross-checking the date of the Brazilian Grand Prix with existing entries in my diary, I saw that I was due to be decorating the downstairs bathroom that weekend. And so it is that I am writing this from beautiful Buckinghamshire UK, rather than barmy Brazil. It’s important for you to know that, because some members of the F1 media – no names, no pack-drill -have been known to miss races, but through their writing and Tweeting, have deliberately given the false impression they are at the races. Here at F1i we’re nothing if not truthful.

Having missed just three GPs since the start of the ’87 season, all for family emergencies, I thought I’d miss a fourth by choice, work from home, save myself a fortune in air fares and hotel bills and not have to put up with Sao Paolo traffic. There are plenty of things I’ll miss this weekend, including the fact that Interlagos is actually a cracking race track. But if you consider that I watch every race on the monitors in the media centre, I’ll be just as well served at home, watching on TV with the F1 app giving me all the timing info. By now, I’ve missed the traditional and possibly the last Jenson Button Brazilian Churrascaria meatathon evening for the British media, but I’m not missing the caipirinha and red wine-induced hangover that goes with it. Nor am I missing paying 300 dollars for a full internet connection in the new windowless media centre. The Brazilian race organisers clearly feel that as their country has a reputation for robbing people, they might as well adhere to that stereotype. How strange that of all the wonderful features at Silverstone circuit that the Interlagos folk could have copied, they chose the one that ensures the press get a room with no view. 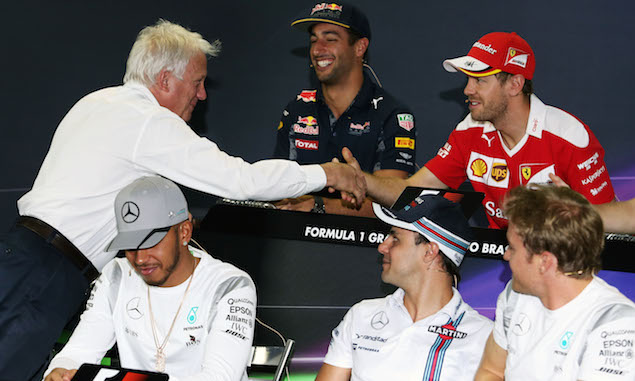 I watched a bit of F1 history being made on TV from my sofa yesterday, when, exceptionally and specifically to discuss Mexico GP penalties and swearing, Charlie Whiting joined the usual suspects for the FIA driver press conference. While it might have seemed strange to us, you have to bear in mind the drivers are well used to chatting with the Race Director, as they have meetings with him at every race and the vastly experienced guru on all things technical in F1 is probably one of the most approachable officials you’ll find, not just in motor sport, but in any sport for that matter. Inevitably, the conference began with five drivers being asked to say something nice about Felipe Massa sitting in their midst for his final home race, which meant it turned into Platitude Central. Apart from a word from Sebastian Vettel, who proved that when not telling officials to go forth and multiply he can conjure up a nicely turned phrase. “He’s the kind of person you look at and smile, because he’s just smiling from the inside... It’s his weekend” he said of the retiring Brazilian driver.

What was interesting about the Mexico part of the conference is that not one driver had changed his mind about the incidents and penalties. Those who escaped penalty free or benefited from them, like Hamilton and Ricciardo, thought the Stewards had done a good job, while Vettel and Verstappen who were penalised, still believed they had done nothing wrong and the Stewards decisions were incorrect. It goes to show that when people make their mind up, it’s almost impossible to change, as they found out just north of Brazil in the DSA (Divided States of America) a couple of days ago. One German journalist, a man with no sense of humour, but who thinks he has one, actually raised the grievous topic of the new American president, asking Whiting how often he thought Donald Trump would go before the stewards for bad language.

What effect will the election as POTUS of the comb-over guy with the orange face have on F1? It’s already started with Sergio Perez’s commendable decision to dump a sponsor who joked about Trump’s racist remarks aimed at Mexicans. Other than that, we’ll have to wait and see, although I was disappointed to discover that all-round racing legend Mario Andretti was a Trump supporter and had even taken the American Psycho for a spin in a two-seater IndyCar a while back, as the F1 champ tweeted a photo of that event saying he was driving the Donald to the White House. Actually, I haven’t heard Trump say bad things about immigrant Italians, because even he isn’t stupid enough to mess with that particular minority…capiche? And speaking of Italians, it has come to light that the man responsible for launching Ferrari’s appeal against Vettel’s Mexican penalty is a descendant of the chap whose job it was to rearrange the deckchairs on the Titanic. 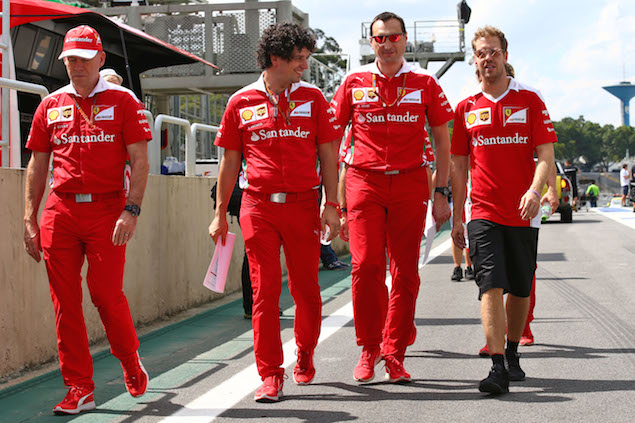