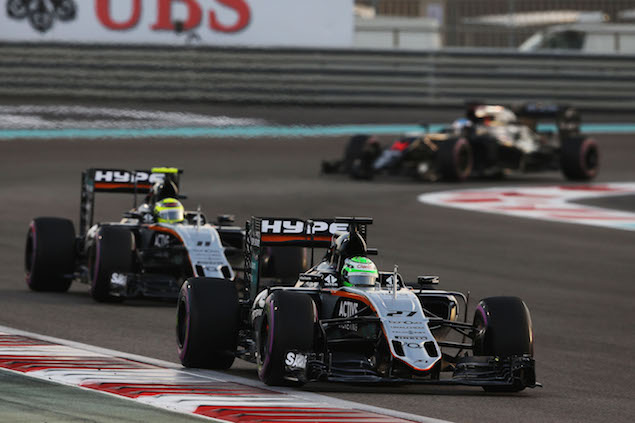 Nico Hulkenberg
“It was quite a simple and lonely race actually, mainly racing with my teammate because the top six cars were just out of reach. Turn one was quite interesting because I got hit by Max [Verstappen], which damaged the floor of my car and made things a bit more difficult. Fortunately we had the pace to hold position and bring home the result. It’s great to end my time at Force India with a strong result and help the team finish fourth in the championship. Everybody deserves congratulations and big credit for the amazing job this year. I leave this team with lots of happy memories and Force India will always be a part of my life. I’ve learned a huge amount here and they have made me a better racing driver. We’ve grown up together and I’m proud of what we have achieved.”

Sergio Perez
“I am pleased with my race. I finished where I started and it was a quiet race for most of it, but it got a bit tense in the final laps when I had to fend off Felipe [Massa]. I pushed really hard at the beginning of my stints, trying to close the gap to Nico, but in the end I finished just behind him. It was great to finish the season with some points and to end an incredible year with a good result. Now that the season is over, I will go back to Mexico and enjoy some rest. It’s been a long and intense year and I am looking forward to some downtime with friends and family. They’re going to be happy holidays, thinking about what we have achieved this year. I’ll chill out a bit and then it’s back to work for 2017!”

Robert Fernley, Deputy Team Principal
“To end the season with two cars solidly inside the points and with fourth place in the constructors’ championship feels fantastic. It has been a tremendous year for us and it’s important to pay tribute to each and every member of the team for all their hard work and hours of dedication back at base and at the track. All the effort has paid off and we can now celebrate the best ever year in our history. Both drivers did a super job today, as they have done all year long. It’s great that Nico could end his time with us on a high note and we thank him for everything he has done for us during his five years as a Force India driver. He’s been a big part of our journey up the grid and it has been a pleasure working with him. Credit to Sergio, as well, who becomes the first Force India driver to cross the 100 points in a season milestone. He’s been exceptional this year and fully deserves to finish seventh in the drivers’ championship.”